Crash course for an out-of-control dog

Image
Dog with impulse control issues (jumping, mouthing, other rude behaviors) gets reward-based training to calm down and get control of his unruliness.
By Christelle L. Del Prete

Hodor is the kind of dog who loves people and is always thrilled to get visitors. But when 100 pounds of overexuberant white Labrador come hurtling at you, it’s enough to make anyone say “Whoa!” Although Hodor wanted to be friends with everyone, his unruly behavior kept people away. But with healthy doses of training, topped with his favorite treat, that’s all changed.

Impulse control for a rambunctious dog 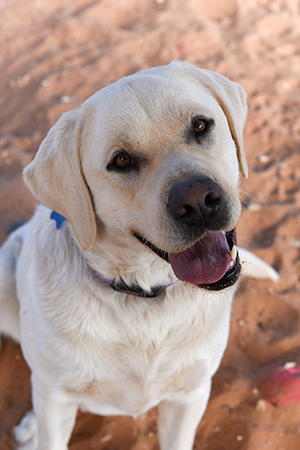 When Hodor arrived at Best Friends Animal Sanctuary from a small rural shelter, he was carrying a few extra pounds and had no impulse control. He was so big and exuberant that he could easily knock over full-grown adults when he threw himself at them. Jumping up on people is less-than-great behavior for any dog, but for a dog as big as Hodor, it was especially important.

When Hodor first arrived at Dogtown, he knew only one way of saying hello to people. He launched himself at anyone who tried to come into his room or his yard and grabbed at their clothing with his teeth. He quickly discovered that this was a sure way to make people turn around and leave, so it was important that he learn a simple trick: When people come to his door, keep all four feet on the ground and wait. Then, the person he was so excited to see would come in and give him a treat — but not just any treat.

Dogtown staff realized that Hodor would do anything for a squirt of cheese from a can. All he had to do was figure out what’s being asked of him, and he’ll get some cheese. For the first time in the rambunctious dog’s life, things were beginning to make sense.

​How to control your dog through training cues

Getting into his room or yard without being bowled over by the giant dog is only the first step. Hodor easily gets overexcited once the initial greeting has passed, so keeping him focused and busy after that is just as important.

First, Dogtown trainers taught Hodor the “touch” cue, where he would touch his nose to the palm of their outstretched hand. That way, if he was barreling toward them, they could reach out and ask him to slow down and touch their hands with his nose instead of crashing his body into them.

Next, they placed a dog bed in his yard and taught him the cue, “go to your place.” Instead of leaping at someone when he hears this cue, Hodor learned to jump up to his bed. As with “touch,” Hodor was rewarded with squeeze cheese every time he leaped onto the bed.

Because waiting is really hard for Hodor, he has a tendency to bolt off the bed as soon as he receives his reward. So, his trainers turned it into a game in which Hodor can bounce off his bed and run back to them, as long as he sits (without jumping up) when he gets close to them. Then, they ask him once again to go to his place.

Sometimes, Hodor will spend half his training session running back and forth from “sit” to “place.” But that’s OK, because he’s not only perfecting his training cues. He’s getting lots of exercise to offset the cheese by shedding some extra weight. In just over two months at the Sanctuary, Hodor has already lost five pounds.

How to teach a dog to “go to your place” 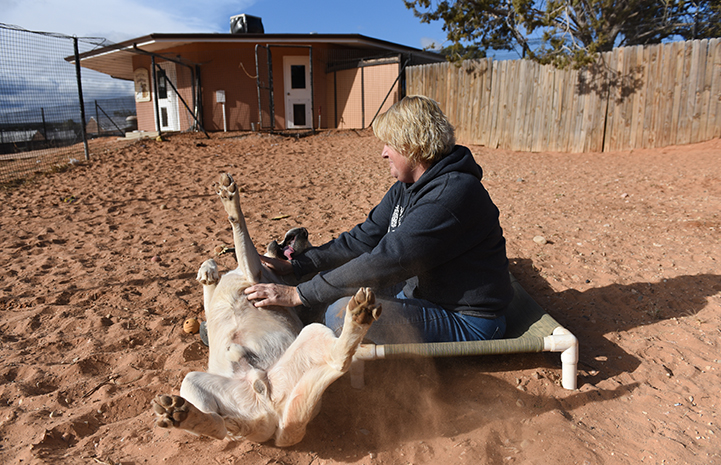 “Tug” is another form of exercise that Hodor enjoys. Though the happy dog might think that tug is just a fun game, at Dogtown it’s one of the ways to calm dogs down. Here’s how it works: Hodor’s trainer picks up his favorite tug toy — a big, knotted rope. Hodor gets excited to play the game, but first he is asked to “wait.” He isn’t allowed to grab the rope and start tugging until he hears the cue “take it.”

Once he’s allowed to “take it,” Hodor can grab, shake and pull the rope to his heart’s content. But if his teeth even make the slightest contact with his trainer’s hand, the game is over and Hodor is expected to stop playing and let go of the rope when he hears “drop it.”

With its many useful training cues, tug has gone a long way toward redirecting Hodor’s abundant energy and giving him something fun to do while he’s learning to wind down around people. And Hodor is so interested in people and so eager to please that he’s happy to play by the rules.

Exuberance will always be a part of Hodor’s personality, and his zest for life is endearing and sweet. But perfecting his training skills and learning new ones (such as how to wait patiently when someone puts his harness on) will only help this big, happy Lab get more of what he wants in life: quality time with people. 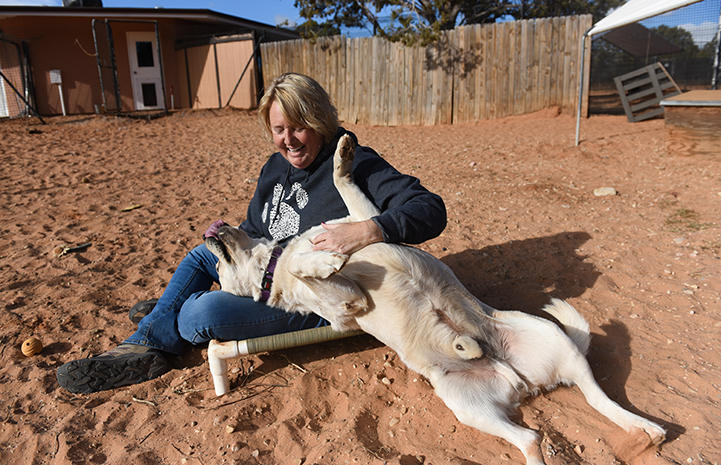