Image
Deaf, blind, three-legged kitten may have special needs, but he doesn't realize it. He is living life to the fullest in his adoptive home.
By Christelle L. Del Prete

Dan was still a kitten when he came to Best Friends Animal Sanctuary, but he’d already lost a lot in his short life. Besides missing his rear right leg, Dan lost much of his sight and hearing by the time he was four months old. Suddenly, he was a kitten with special needs. But during the time that he lived at Best Friends, he proved that the only thing he really needed was love — and the family who never stopped thinking about him. 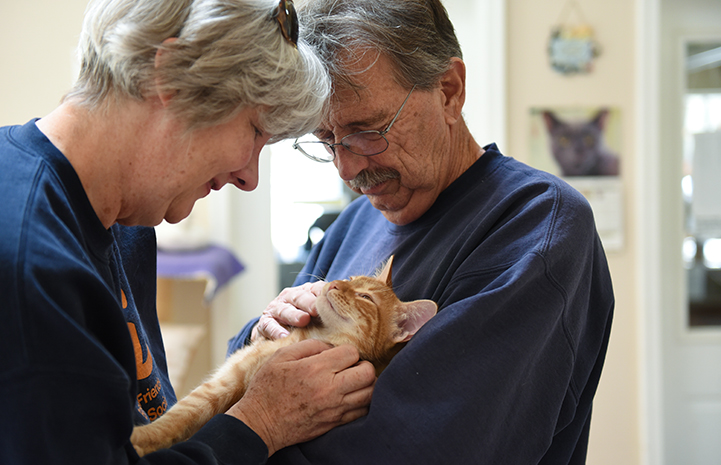 Before he came to the Sanctuary, Dan had been living in a foster home with Sara Leavitt, who volunteers with the Angel Network, the group that originally took in Dan. When it became clear that the little kitten would need a special home because he was blind, deaf and only had three legs, Susan Barrett of the Angel Network reached out to Best Friends for help.

Soon after, Sara drove Dan to the Sanctuary, even though the sweet orange cat was tugging on her heartstrings — and those of her 12-year-old daughter. “I didn't have very much experience with special-needs cats,” she says, “and I was nervous I wouldn't be able to meet his needs while also fostering ‘bottle baby’ kittens, which I had a lot of this year.” 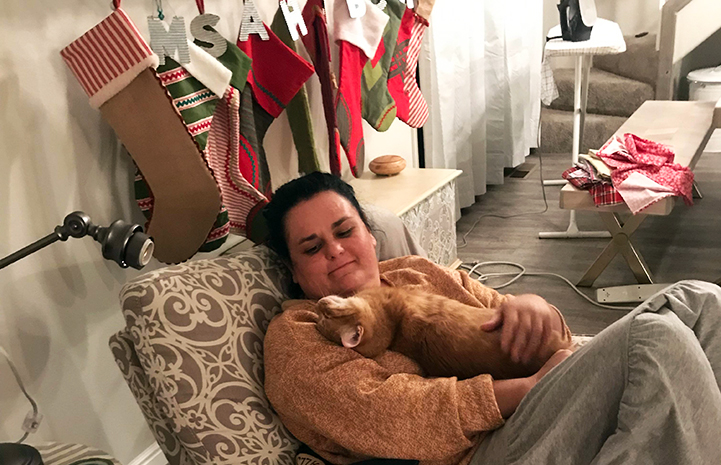 Cat with three legs charms everyone 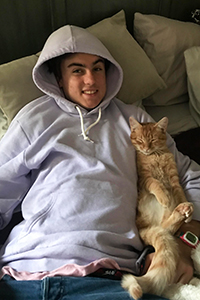 At the Sanctuary, Dan quickly proved that having special needs doesn’t always mean what people might think. Although he can’t jump up on things because of the missing hind leg, Dan navigated his building in Cat World as well as any fully-sighted cat. He learned to come bounding across the room or the outdoor catio when his caregivers called him, and he would even chase after one of his caregivers in a game of tag.

Except for Dan’s gorgeous gold eyes, the first thing that Cat World visitors and volunteers noticed when they met him wasn’t physical. Instead, people would comment on how incredibly loving he is. Dan quickly became the official greeter for the Sanctuary tours that stopped at his building, and he often let people hold him like a baby while he purred, made “air biscuits” and gently touched one of his paws to their cheeks. Within just a few months, he’d charmed dozens of people.

Dan’s time as a tour greeter was coming to an end, though. But it was for the very best reason: Sara and her family missed him terribly. They had even taken a special trip out to the Sanctuary to visit him in Cat World, a visit that ultimately sealed the deal and made him part of their family.

“My daughter and I couldn't get Dan out of our minds and hearts. After visiting him, I knew I needed to bring him home. I filled out an adoption application and the rest is history,” Sara says.

Sara wasn’t sure how a cat missing a leg would adjust to living full-time in her home, so she went out and bought stairs for the beds and couches, gates for the stairs and raised food bowls. But that turned out to be unnecessary. Independent and spunky, Dan had no trouble at all going up and down stairs, using the litter box and enjoying some play time outside (while being closely supervised). He fit in almost instantly with the family’s two dogs and three other cats. Best of all, Dan quickly had all five of Sara’s kids wrapped around his little paw. Now, he is never without a lap or bed to sleep on.

“He is amazing,” Sara says. “I think what I have taken away from adopting Dan is that a pet with special needs is no different than any other pet, and it’s nothing to be afraid to take on. All pets are special, and they all have different needs, but they are all worth it.” 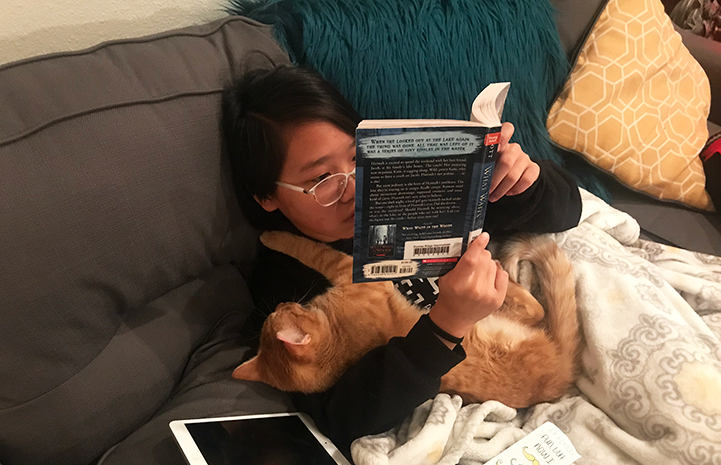 Photos by Molly Wald and courtesy of Sara Leavitt