Several months ago, the Washington County Drug Task Force raided a home in Santa Clara, Utah, on a tip that one of the residents was in possession of heroin.

The raid turned up more than just heroin; it also turned up a very sickly desert tortoise.

The desert tortoise is now at Wild Friends, the wildlife rehabilitation center at Best Friends. Because of his poor health, he’s also been admitted into our Guardian Angel program, for animals at our Sanctuary who are in need of extra care -- and the donations to make that happen.

When police entered the house in Santa Clara, located about 90 miles west of Best Friends, they purportedly found the tortoise with a bag of heroin taped to the underside of his shell. The tortoise belonged to the owner of the house, the mother of the man arrested in the raid.

Native to the Sonoran and Mojave deserts of southwestern U.S. and northern Mexico, desert tortoises in the Mojave have been listed as threatened under the Endangered Species Act since 1989. Since 1950, that population has fallen by an alarming 90 percent, a plummet brought about primarily by encroachment and habitat fragmentation and destruction.

Possessing one without a proper license is a federal offense. Possessing any wild animal is, for that matter, a crime if you don’t hold the proper permits. Though the woman claimed she legally acquired the tortoise before the species was listed as threatened in 1989, she couldn’t provide police with the necessary documentation to prove it.

The tortoise was in bad physical condition at the time of the raid — he was unable to walk, perhaps due to a mysterious, massive swelling in his leg. The Utah Division of Wildlife Resources (DWR), afraid he was close to death, confiscated the animal. 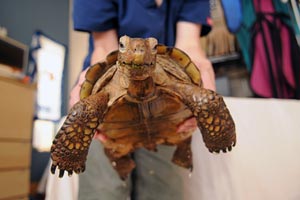 Contained inside the laundry room, the tortoise had lived among several cats at the house. He apparently smelled so strongly of cat urine that DWR officials had to soak him to rid the smell. The tortoise also had a bubbly discharge coming from his nose, sign of a possible infection. Asked repeatedly, the woman who kept him wouldn’t reveal what she had been feeding him.

DWR’s herpetologists estimate the tortoise to be around 40 years old. Desert tortoises generally have a lifespan of 50 to 80 years in the wild, though they can live longer in captivity.

For the last six months, the tortoise was with the DWR in St. George, but his health didn’t improve much during that time. The agency recognized it was unable to give the tortoise the vigilant attention and the medical care he needed, so the division requested that Wild Friends accept the tortoise into its conservation education program, which means the tortoise will live out the remainder of his life at the Sanctuary.

"With his health problems he will need chronic medical care for the rest of his life," says Carmen Smith, licensed wildlife rehabilitator and manager of Wild Friends. "And with his upper respiratory infection, he can never be reintroduced to the wild, because he could easily spread the infection to other tortoises."

Tortoises weigh eight to 15 pounds, with a shell length of nine to 15 inches. To cope with the temperatures in their habitat, which can range from freezing to 140 degrees, they burrow three to six feet underground and remain there until temperatures become bearable again. They extract most of the water they need for the year from the grasses and flowers they devour in the spring. These land-dwelling turtles can live as long as a year without access to water by storing it within their bodies and drawing from the reserve (or allowing it to go to their bladder) when needed. They also dig catchments in the ground to collect rain water, and have been seen waiting at those catchments just before a thunderstorm rolls in.

Even though they’re protected under the Endangered Species Act, desert tortoise numbers are still dropping. And the future doesn’t look much brighter. Scientists expect global warming to bring even hotter and drier weather to the southwest, resulting in less plant life and less water for the tortoise to subsist on.

"It’s crucial we educate as many people as we can about this remarkable species," Smith says. "So, in a way, we’re lucky that we can actually present visitors to Wild Friends with an actual individual and be able to talk about them in a way that will have a great impact on people."

Every day the caregiving staff at Best Friends face challenges caring for and rehabilitating a variety of animals. Thanks to your support, Best Friends animals get state-of-the-art care, once unheard-of for homeless pets. No matter what special needs they have, all of their needs are met, both medically and emotionally. And those who were once thought unadoptable become ready for forever homes. Thank you for making this whole thing possible.