Determining the age of orphaned kittens

If you find a litter of kittens that you have observed long enough to know for certain that they really are abandoned, and therefore at risk, the first step is to determine how old they are. Caring for and feeding newborn or very young kittens requires a different strategy from taking care of older kittens, so knowing how old they are from the very beginning is important.

Best Friends veterinarian Dr. Patti Patterson recommends weighing the kittens as the best gauge for determining how old they are. A food or postal scale works well.

Figuring out the age of the kittens

If a scale is not readily available, here are guidelines to help determine the kittens’ age:

Under one week (less than four ounces) – Eyes and ears are shut, skin is pink, and partial umbilical cord may be visible.

One week to 10 days (four to six ounces) – Eyes are beginning to open, and ears are still flat. The kittens fit in the palm of your hand.

10 days to two weeks (six to eight ounces) – Eyes open more frequently and are usually a bright blue color. The kittens become more active and do a bit of crawling on their tummies, but most of their time is still spent eating and sleeping. They still do not have any discernible teeth. 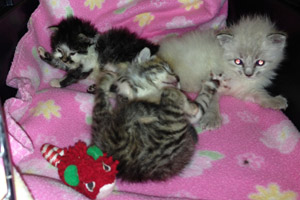 Two to three weeks (eight to 12 ounces) – Eyes are completely open. Ears start to open around 14 days and should be fully erect by three weeks. Teeth should be visibly coming through their gums. The kittens start to be more ambulatory; walking, albeit wobbly, commences.

Four to five weeks (12 ounces to one pound) – Kittens are playing a lot more and sleeping less; they are able to leap and frolic. This is the age where the weaning and transitioning to solid food should begin, and the kittens will begin to use the litter box to eliminate.

Six to seven weeks (one pound to one and a half pounds) – Kittens are actively exploring their environment. This is a crucial time to start safely socializing and introducing the kittens to new experiences and friends.

Eight weeks (one and a half pounds to two pounds) – Kittens should be fully weaned, using the litter box and ready to find their forever families.

Note: This article is the second in a four-part series on caring for baby kittens who are abandoned. Read more about orphaned kittens in part 3. Or start at the beginning of the series of articles.