Image
Prejudice against pit bulls is a reality, but Best Friends and other rescue groups are working to change this. Read one pit bull's story.
By Denise LeBeau

Like he does most days, Schroeder the pit bull terrier reacted to the presence at the door with enthusiasm. But on this day, the door was not secured properly, and the rambunctious dog, acting towards the perceived threat, bruised the mail carrier as she reached in to close the cracked door.

The McManuses were shocked and regretted not having taken further precautions to ensure the safety of all those who entered their property in Rochester, New York. 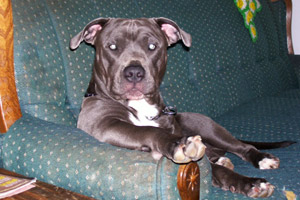 When the city attorney asked the family to sign over their beloved pet to be destroyed, they tearfully complied. Not fully understanding their rights (and the authorities were not sharing pertinent information), the family was hoodwinked into believing they didn’t have any choice.

Amanda McManus, while grieving over the tragic events, mentioned in passing to her neighbor their ordeal, and the neighbor started turning the tables for their dog. Since Schroeder was a pit-bull-type dog, the neighbor thought perhaps the McManuses were being treated unfairly. “When it became clear that Schroeder was being persecuted, that he was not given an evaluation, we were 100 percent sure it was because he was a pit bull that he would pay with his life for this mistake,” she explains. “We knew we had to do all we could to let justice prevail.”

Justice prevails for the dog and her family

Public support was rallied, and a petition was started to save Schroeder. In a few days, it had 15,000 signatures. They also set up a Save Schroeder Facebook page to share their journey. Best Friends was contacted, and Linda Gage of the No More Homeless Pets Network sent resources and started looking at alternative sanctuaries if Schroeder couldn’t go home.

On September 28, 2012, justice for Schroeder prevailed. He went home to live with his loving family. The McManuses are continuing to work with a trainer to help modify Schroeder’s behavior and get the lucky pup ready for his newest sibling. The joyous family reunion is even more blessed: Amanda is having a baby.

“We were so surprised by all the support. We are so grateful to all the people that helped bring him home,” Amanda says with a smile. “We’re working with the trainer now on introducing Schroeder to the baby and better ways to greet people at the door.” 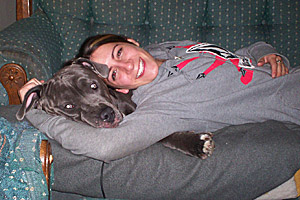 “What Schroeder did was protective, but he shouldn’t pay for with his life for a bruise,” says Ledy VanKavage, senior legislative attorney at Best Friends Animal Society. “City attorneys and officials frequently buy into the media bias and myths surrounding ‘pit bulls.’ Tragically, many animal control officials and even humane society workers judge dogs simply on their appearance, not their character. Canine profiling is wrong; it’s a modern-day witch hunt that humanitarians need to challenge.”

Best Friends Animal Society also sent legal resources and reference material on behalf of Schroeder to his team, including resources available from the National Canine Research Council, American Bar Association, and Best Friends, including the Breed Discriminatory Legislation Fiscal Impact Calculator. But it seems there are many “Schroeders” out there, dogs who are being labeled and condemned based on appearance and not behavior or facts.

“The simple truth is there is nothing ‘specific’ about breed-specific legislation,” explains Ledy. “It’s a waste of tax dollars and lives, plus it fails to enhance public safety. Getting breed-discriminatory laws repealed is a main focus, but education is a constant struggle because of the media.”

“As Tip O’Neill says, ‘all politics is local,’ and by working with local governments you can create sustainable change to keep the people and the dogs safe in any community,” Ledy says. “We need everyone to speak up against BDL (breed discriminatory legislation).”

You can make a difference by joining the Best Friends Legislative Action Center.

Photos courtesy of the McManuses