Image
Dog survived distemper as a puppy, but is left with an unusual gait. His mobility challenges don't get him down, though. He lives life to the fullest.
By Christelle L. Del Prete 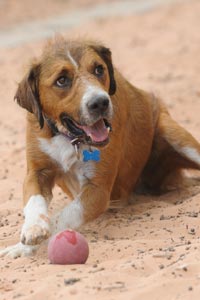 Three-year-old Bentley knows what it’s like to stumble and bumble through life. He came to the Sanctuary from a humane society in Vermont where, because he is a dog with special needs, he had difficulty finding a home. When he was a puppy, he nearly died from dog distemper, and although he was lucky enough to survive, the disease left the handsome young retriever mix with some lifelong mobility challenges.

Watch Bentley walk, and you see just how profoundly the disease has affected him, taking away much of his physical dexterity. His back legs are weaker and less coordinated than his front ones, which causes his hindquarters to operate as if they had a mind of their own and function a bit like a wayward caboose that can’t quite catch up to the front of the train.

Bentley often loses his balance — sort of staggering and lurching in the direction he wants to go. Sometimes he even falls. But Bentley knows that the secret to life is not to let a little unsteadiness get him down. The path he treads may not be smooth or even, but he’s a happy boy who loves people and finds wonder in the world. His spirit is a thing to be admired. Every time he falls, he gets right back up and just gets moving again.

That’s a good thing, because Bentley is almost always in motion. He does a funny little dance when he’s excited. He can play, chase a ball and carry toys around in his mouth, just like any other dog. Walking on Dogtown trails is one of his favorite activities and he gets frisky each time he sets out on one of those jaunts. That’s when he does his high-stepping walk, prancing like a happy horse.

Dog who survived distemper is a volunteer favorite 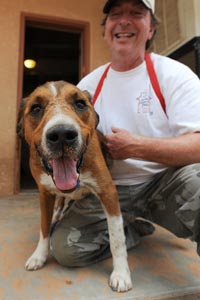 Bentley has a way of endearing himself to new people, making him a volunteer favorite and a fun sleepover candidate. One volunteer called him a "sweet soul who really wants to do the right thing and make people happy.” Another said he is the “sweetest boy ever” and “very affectionate,” while a third complimented his willingness to accept help going up the stairs and getting onto a couch. For perhaps the first time in his life, Bentley’s best qualities are celebrated over his physical limitations.

Bentley has no problem making friends with people, but it takes him a few tries to make a good impression on his canine counterparts. Because he moves differently, other dogs sometimes have a hard time reading his body language. When he first arrived in Dogtown, they weren’t really sure what to make of him and his clumsy attempts at friendship.

But Bentley loves other dogs, and he always manages to win them over. He has two roommates and coexists nicely with them. He even has outings with them at the dog park, where he has a wonderful time weaving and crashing through the sagebrush as he chases or is chased by them.

Once he’s tired out, Bentley comes back to his room and curls up on his special orthopedic bed. He’s living proof that physical challenges don’t have to get in the way of having a happy, healthy and fulfilling life.