Image
Declawed and malnourished when he was rescued, Devin the cat was distrustful, but he's learning to enjoy attention and has made a few friends.
By Jennifer Hayes

Some people have a lot of friends, perhaps thousands if you look on Facebook. Others limit their social circle to a few chosen individuals. Devin the cat has selected two friends … for now.

Who can blame him? After being rescued from a tree, malnourished and declawed, he had no reason to trust people. He had a tendency to lash out, even when well-meaning folks at Best Friends Animal Sanctuary attempted to befriend him.

So once the new Best Friends Cat Headquarters was completed in August 2011, he was the perfect candidate for residency. The building offers personal living arrangements for cats who may not get along with other cats or need specialized attention. Devin fit the bill.

He was moved into his own private suite, but to be honest, Devin didn't enjoy a solo life and was quite vocal about it. So he became the first office cat at Cat HQ. 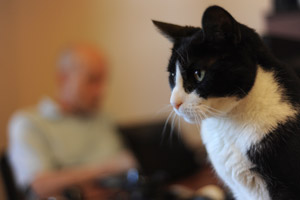 You'd think Best Friends' director of well-being studies Dr. Frank McMillan would make a great roommate. However, Devin wasn't buying it. He let it be known, in no uncertain terms, that even with the friendliest approaches, he still didn't want to be touched.

Little did Devin know there were some determined - and very patient - folks willing to wait out his warm-up period.

Teresa Fifer, volunteer coordinator in Cat World, started visiting Devin regularly. Placing a blanket in her lap, she would sit on the floor and talk to him, encouraging him to take a seat. Over time, he began to allow her to pet his head and even eventually kiss him, but he'd have none of that lap. After months, Devin happened to be on Dr. Frank's desk and Teresa sat on the chair and motioned for Devin to jump over. Eureka, it worked!

Even though he regularly shared lap time with Teresa, Devin's attitude toward Dr. Frank was still, "Talk to the paw." So Dr. Frank attempted Teresa's technique.

"I put the chair back, so my lap was out in front of him," says Dr. Frank, "and sure enough, he stepped right down onto it."

Dr. Frank didn't want to push Devin too fast, so he started with a few days of lap sitting. Then he progressed to gentle touching, then a full pet from head to tail.

"He just loved it," laughs Dr. Frank. "He would just sit there and even purr as I was doing this vigorous scratching down his back, what I call scritching. I allowed him to teach me to do this. Any time he would walk over to my keyboard, I would then back up and give him the lap. He now knows that any time he wants it, he can get it." 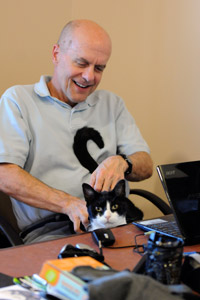 It's now gotten to the point where Devin expects his pets. In fact, if Dr. Frank stops petting Devin, the coddled kitty will turn his head and just stare. Dr. Frank has never put it to the full test, but has waited as long as 15 minutes before resuming his petting duties. Devin never breaks his gaze. Guess he went long enough without affection - now he won't give it up.

"When he's in my lap, he is just the most affectionate lap cat you can imagine," says Dr. Frank. "You would never know he had any issues at all." It's the same thing with Teresa. Anyone else and he's one unhappy camper.

However, Dr. Frank says he believes that if adopted by someone patient enough to wait long enough for Devin to come around, they too would be accepted into his inner circle.

He may be a tough nut to crack, but like all good things, Devin is definitely worth the effort.