Image
Thoroughbred horse didn't like racing. He hates running and was hurt on the racetrack, but he has great potential as a companion and riding partner.
By Christelle L. Del Prete

Two things happened the day Morry went down on the racetrack and didn’t get up right away. First, his life was almost ended right there and then since he apparently wasn’t cut out to be a racehorse. Second, a kind person saw that his life mattered — even if it wouldn’t be spent running on the track. She couldn’t bear to see a horse put down, just because he didn’t want to run. So, Morry was saved.

The young thoroughbred later came to Horse Haven, a peaceful residence for horses at Best Friends Animal Sanctuary. At two-and-a-half years old, Morry wasn’t going to be a racehorse, but he still had great potential as a companion horse and riding partner; however, Horse Haven caregivers and trainers weren’t quite ready to slap a saddle on him. 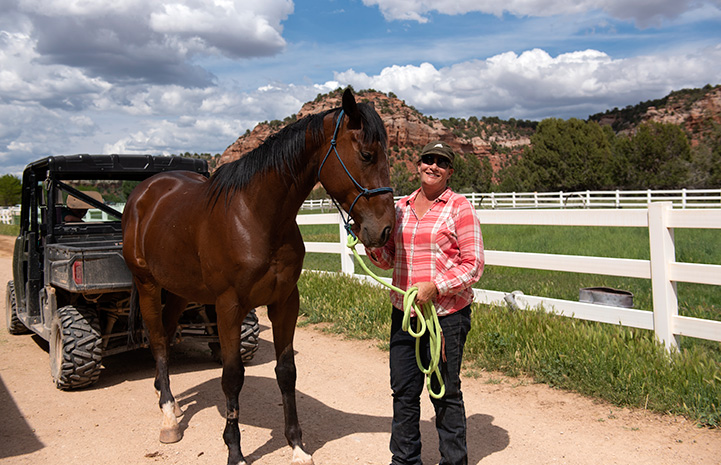 Morry needed veterinary care for a wound on his leg, along with a good feeding schedule to help him get back to a healthy weight, and gentle exercise to recover lost muscle tone. But it was time that Morry needed the most, according to Jen Reid, Horse Haven manager.

Racehorses start young, and Morry (born in 2016) isn’t yet physically or mentally mature. So, while he got plenty of handling at Horse Haven, the first priority was to give him the freedom to be a young horse. He moved in with three other horses who quickly became his friends and spent his days at the Sanctuary “horsing” around and playing with them. But soon it would be time for a new chapter of his life to begin. 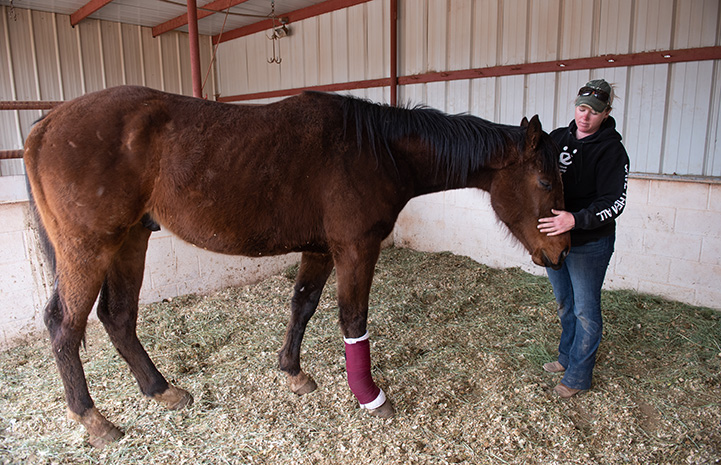 When Nina Nash learned about Morry, her heart went out to him. A resident of a town near the Sanctuary, she had recently lost her beloved 16-year-old horse and wanted another companion horse and riding partner.

“My philosophy in life is that things come along when they need to,” she says. Nina also loves bay horses, and Morry is a pretty bay with a white star on his face and a tiny white snip on his nose. After meeting him and hearing how sweet and smart he is, Nina knew that Morry was meant to be her next horse.

It’s been two months since Morry went home with Nina, and he’s doing wonderfully. Although she hasn’t yet started riding him (because he’s still too young), they are doing all the prep work and training together. Morry is catching on quickly — especially for a horse who didn’t have any previous training or education beyond the racetrack. 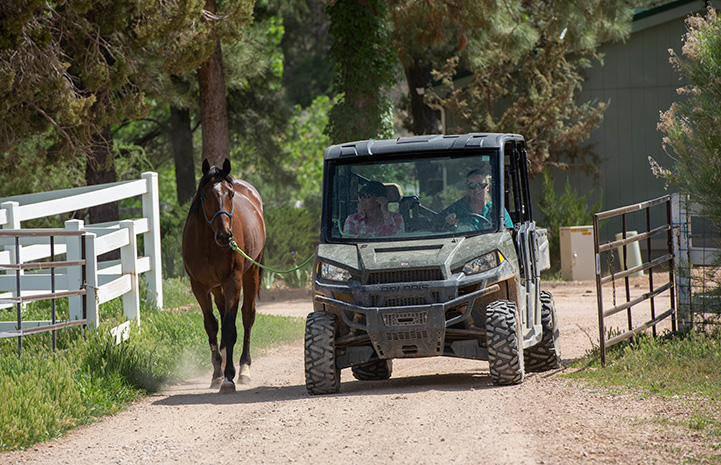 Morry has also been amazing with Nina’s grandkids. “He loves them,” she says. “One of them is three years old and he follows her around like a puppy. He is easygoing and just a sweet old soul.”

Does Morry miss his days on the racetrack? Not for a moment. “He still doesn't want to run,” Nina says with a laugh. “We let the horses loose in our area, and the other two will run, buck and play. Morry just looks at them like, ‘What on earth are you doing?’ He doesn't think running is a great thing, and that’s OK with me. He's the greatest and I’m just in love with him.”

While this young thoroughbred will never set any speed records, he’s much happier, healthier and surrounded by love — now that he’s left horse racing in the dust, 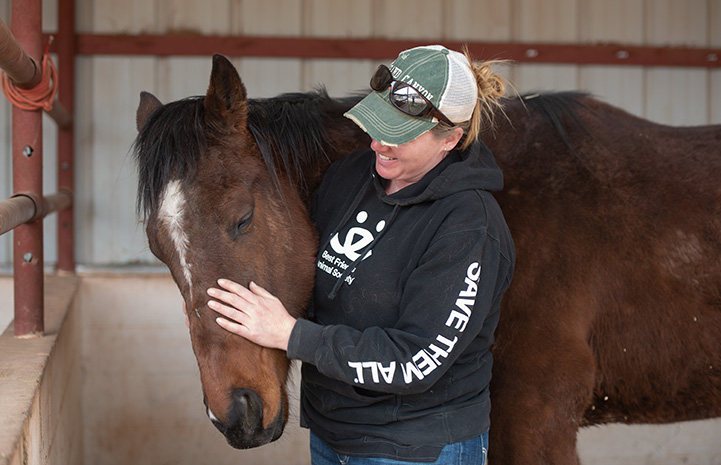