Do you have leukemia, too?

It’s hard being a kitten with feline leukemia, but it’s easier when you have a friend. And now, these two new Best Friends arrivals say they’re the happiest friends ever! 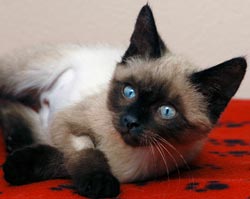 Meech and Alexia came to the sanctuary from very different circumstances. Meech (left), the Siamese one, started life under a trailer. She was part of a litter of feline leukemia kittens that their mom was hiding under somebody’s home! She kept moving them to protect them from the family Chihuahua who’d make an occasional appearance. She finally settled for right underneath the trailer. Little did she know that the trailer belonged to a Best Friends staffer! So the whole family was off to the sanctuary. Sadly, Meech was the only kitten who survived the leukemia. 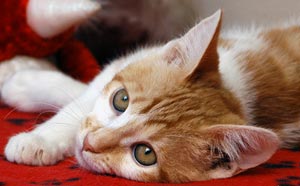 Alexia (right), on the other hand, came from a home in California. She was given up because – whew – what a list: The husband’s allergic, the dogs hate cats, and the kitten seems to have feline leukemia. Of course, Alexia didn’t understand any of that. She just knew she was in a strange new place at the sanctuary, and didn’t have anyone to play with.

Of course, feline leukemia kittens can’t play with just anyone, because they might pass along the virus to other cats. But what luck! Alexia and Meech happened to come along very close to the same time. So perhaps the two of them would like to be friends?

Not only would they like to, but it turned out, they would love to! Meech circles round her lazing friend, up on her hind legs like a bear. Then mrow! Alexia reaches up and swats at her belly, making Meech turn into a cat again and race up to a ledge. Alexia decides it’s her turn to be the bear …

The kittens play together all day long, and when they’re done, they cuddle. How nice to have found a friend! In truth, nobody knows for certain how long these kittens have. Grownup cats who get feline leukemia can live long, healthy lives with it. But kittens who are born with fe-leuk only occasionally do as well. No one knows for sure about the future of Meech and Alexia, except for this – that however much time they have, it’s going to be spent together. And it’s going to be filled with love, adventure, and imaginary bears. Not to mention a whole sanctuary full of people rooting for them!