Image
The city of Detroit declares bankruptcy and the animals are suffering. Blue Buffalo food donation helps the homeless pets of the city.
By Denise LeBeau

In 2013, Detroit, Michigan, became the largest city in the United States to declare bankruptcy. The media has been reporting on the devastation, which includes scenes of row after row of abandoned buildings and of pets left behind. How could Best Friends Animal Society, over 1,800 miles away, help people in the area save more of these animals?

The No More Homeless Pets Network is a coalition of organizations around the country with the same no-kill philosophy as Best Friends. As Network partners, organizations are eligible for a variety of support and resources to help them save more animals in their communities. Michelle Logan, Best Friends No More Homeless Pets Network specialist, covering the region including Detroit, was committed to helping animals in the area. “We were aware of the situation in Detroit,” says Michelle. “We wanted to help out, so we got on a conference call with local groups and brainstormed about their biggest challenges and what we could do.”

One of the greatest needs? Dog food. Organizations like Network partner Detroit Bully Corps are filled to capacity with homeless animals, and many individuals have taken to the streets to help feed the free-roaming animals.

Tons of support for pets in need 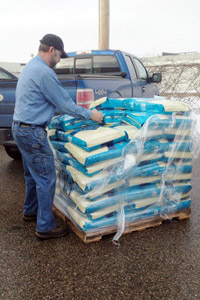 Luckily, Best Friends has a true friend in the pet food company Blue Buffalo. Throughout the year, the company donates pet food to Best Friends — sometimes so much that there’s plenty of food to share with Network partners who need it. Detroit Bully Corps was able to facilitate the unloading and distribution of dog food by the ton. They shared the food with other local groups.

“We can’t have more dogs than we can properly care for. We have a limited amount of resources,” says Michelle Spranger of Detroit Bully Corps. “That’s why we love being a Network partner. This donation will allow us to feed our pets for a year, and that means the money we saved on food will allow us to help more dogs. It was also great to be able to facilitate the distribution of the dog food to other local groups. We are all working towards the same goal, and this donation is helping almost everyone involved in animal rescue in the Detroit area, in some way or another.”

By sharing resources, Best Friends is able to help even the most disadvantaged areas through some of their most difficult times. Many of Detroit’s pets-in-waiting will be sleeping with full bellies thanks to the teamwork.

“We were happy to help Detroit Bully Corps; they are hitting a population that is so much in need,” says Michelle. “Best Friends wanted to make sure all the needy dogs in the area got food, and pit bull terriers are some of the most at-risk animals out there.”

To help animals in need in your area, click here to find a No More Homeless Pets Network partner near you.