Dog goes from jumpy and mouthy to sweet and cuddly

Image
Guy's anxiety and exuberance were overwhelming when he first came to Best Friends, but training and a foster home uncovered his softer side.
By Sarah Thornton 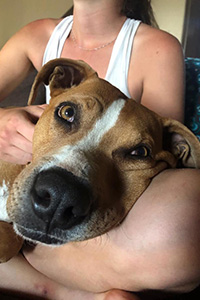 Guy likes to sit as close as possible to his human friends, and even at 75 pounds he still thinks he’s a lap dog. When he first came to Best Friends Animal Sanctuary, his love for people, when paired with anxiety, added up to some troublesome behavior. But with some specialized help and a foster home, he’s feeling better and has gained a reputation as the best cuddler and bed buddy a person could hope for.

Finding calm for an anxious dog

When Guy first arrived at Best Friends, he was anxious and excited at the same time, constantly jumping up on people and grabbing their clothes and hands with his mouth. “You couldn’t get him to stop when he started,” says Debbi Carman, a Sanctuary caregiver.

That’s quite a deterrent for potential adopters, so trainers and caregivers went to work to quell his anxiety and teach him better ways to express his love and excitement. The advanced training program at Dogtown is designed to help Guy and dogs like him to work through behavioral challenges that stand between them and new homes.

Games like tug or cues like “place,” are great for helping with impulse control. Bungee stays (asking dogs to stay, take a few steps back and then return for a treat as a reward) may seem simple, but they’re hard work for dogs who want to keep moving all the time.

As Guy mastered his training, he began to jump less and stop putting his mouth on people’s clothes and limbs. The loving dog underneath came through stronger and stronger. 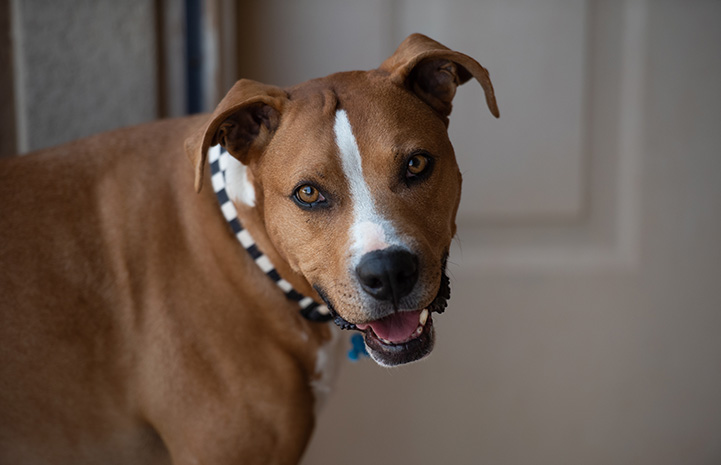 Debbi says there were still times when Guy’s anxiety got the best of him, and he’d look for a different way to express himself. “It was always when something exciting was about to end ― when you were going to harness him, when something exciting was about to begin and any time he was feeling extremes of emotions.” But, she adds, his human friends could recognize when he was getting overwhelmed and were always there to help him calm down.

No longer constantly jumping onto people or pulling on them with his mouth, he was able to spend even more time doing what he loved best ― cuddling up to his favorite people, taking long walks and enjoying a quieter type of playtime. Now, the only time he gets overexcited is when he meets someone new, which can be handled easily enough by having him focus on an alternate activity, such as a toy or a separate task.

Guy was doing great. But how would he handle the transition into a home? He needed a foster home to find out.

For three weeks Guy’s foster-mom-to-be, Brianna Vlach, visited him at the Sanctuary to get to know him and learn from his caregivers how to help him with anxiety. Elle Greer, Brianna’s roommate, brought her dog, Willow, so the two could get acquainted on some walks. “And then,” Brianna says, “after about the third walk, he came home with us. And he’s just been an absolute doll ever since.”

When she took Guy home, Brianna says she relied a lot on the foundation that others had built with him. “I got him into a routine as quickly as I could,” she says, “and he’s done really well.”

From the first day, Guy was squeezing onto Brianna and Elle’s laps and snuggling into bed at night. Brianna says he showed some anxiety at first, but without the sights and sounds of other dogs all around, and with comfortable couches and relaxing cuddles, the anxiety melted away as he settled in.

“He’s so sweet. He’s so smart. He’s such a good boy,” Brianna says, adding that he’s the best sleeping buddy. “I couldn’t sleep the other night. I was up until 1 or 2 o’clock and finally I just rolled over, snuggled him and I was out in about two minutes.”

Guy’s not only an accomplished lap dog and snuggler, but he’s also proving himself to be a great companion for Willow. At the Sanctuary, Guy wasn’t very interested in playing with other dogs, but now Brianna says each afternoon the two play nonstop. 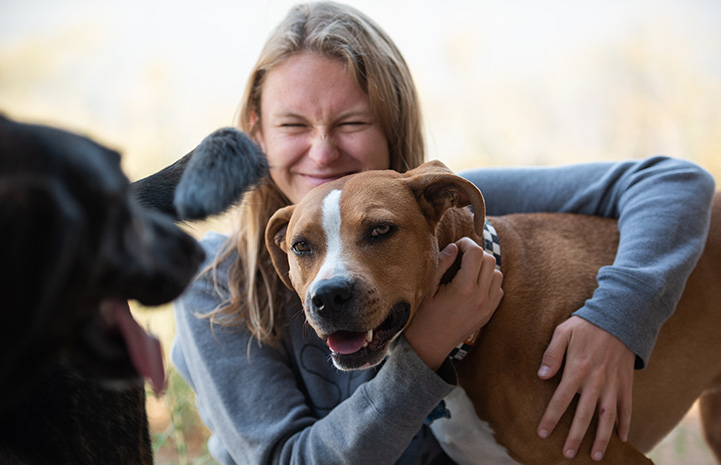 When Guy gets tired before Willow, he still plays with her — just from the floor. He’ll flop down on the ground and hold onto whatever toy they’ve been playing with, while Willow grabs the other end and drags him across the room. Brianna confirms it’s just as ridiculous as it sounds: “Willow doesn’t weigh as much as him, so just seeing her yank this dog around is hysterical.”

Guy’s been with his foster family for just over two months and has a standing invitation to stay as long as necessary. Brianna is determined to see him adopted out of her home, no matter how long it takes. And she knows whoever adopts him will fall in love with him.

“I will admit that, as his foster mom, I was a little nervous at first,” Brianna says. “But if you just make it through that (early part), see through his anxieties and how hard he’s trying and you just give him that time to acclimate, you’ll get to see so much growth … The reward for it is unbelievable. He’s just the absolute best.” 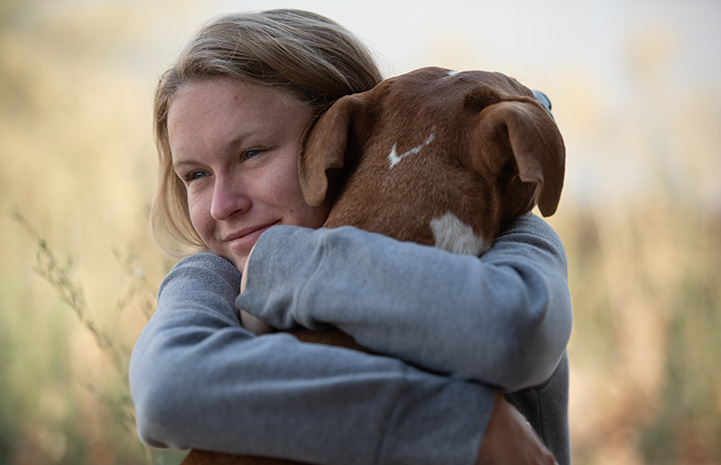 Looking for a rewarding experience?

Fostering a dog can save a life, plus you get to spend time with a dog. What could be better?