Valentine’s Day brings visions of love at first sight, with Cupid drawing back his arrow and taking aim at a lost, lonely heart. While pairings at the Sanctuary are made for far more practical reasons, love blooms naturally from them anyway. Take Dogtown canine couples Sid and Sookie and Arrow and Indy, for example. Caregivers thought about what each dog needed most and matched these dogs up, because they each had something very special to give the other.

Sid and Sookie the dogs 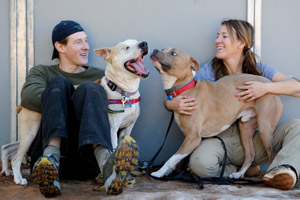 Sid arrived at the Sanctuary this past June with a somewhat checkered past. He had deep-seated fear issues, hunkering down and digging in his heels whenever anyone tried to get him to leave his play yard or room. He didn’t trust anyone at all. But he did trust other dogs. So caregivers started bringing in doggie friends to help Sid see that people aren’t scary at all — in fact, they can be lots of fun.

That’s where Sookie came in. The two hit it off instantly, and she gave Sid the boost of confidence he so desperately needed. Now, when Sookie gets leashed up, Sid is right next to her, waiting for his turn. Now he happily follows his new friend out for a walk, instead of worrying so much about the person on the other end of the leash. Wherever Sookie goes, Sid will follow. This means he gets to enjoy trail walks at the Sanctuary, and visits with people in the staff room in Dogtown Headquarters.

But this relationship isn’t one-sided. Sookie needs help too, and Sid is more than happy to lend a paw. You see, although Sookie is great with people, she’s awkward and a bit selective with other dogs. Sid not only provides good company for her (and a play date in the dog park every Friday), but he helps her loosen up and feel more comfortable around other dogs.

Arrow and Indy the dogs 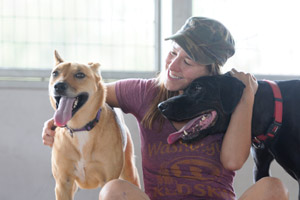 This kind of pairing – where one dog is shy with people and the other shy or awkward around dogs – is quite common at the Sanctuary, because the dogs help each other overcome those fears and anxieties. That’s how it is for Arrow and Indy. Indy used to freeze when meeting new people, while Arrow will run right up and do a happy dance for attention.

Since coming together over a year ago, Indy and Arrow have made some pretty amazing changes. Taking her cues from Arrow, Indy now walks up to, and takes treats from, people when they come to her run. When he’s around, she feels safe and brave enough to let her beautiful personality shine through. She’ll even let loose in the dog park, playing tug-of-war and wrestling in the dirt with her best friend.

And Arrow, who, like Sookie, is selective with his canine friends, is learning from Indy how to get along with them. He’ll let her do just about anything to him. When he’s nervous or agitated, she’ll run up to him and start kissing him on the mouth – a form of appeasement that says, “It’s OK, I’m your friend.”

Love like this is entirely possible when the right dogs are brought together to become friends. And these relationships help dogs grow in so many areas of life, including the heart.

Meet all the adoptable animals at the Sanctuary.