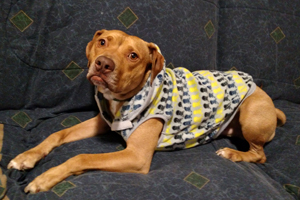 To say that Lakota the dog needs a little time to adjust to new situations would be an understatement. The three-year-old pit bull terrier mix was rescued from a dogfighting ring a year and a half ago. Growing up in that environment had a devastating effect on him. He arrived at Best Friends Animal Sanctuary completely terrified of people and shut down to the world.

Dogtown trainers and caregivers worked with Lakota in the admissions building for three months before he was ready to move into one of the regular areas of Dogtown. But, when he made the move, Lakota made it clear that his new living arrangement was too scary for him.

At first, he wouldn’t come inside at all. And, since winter was setting in, the high-desert nights were getting really cold. Dogtown caregiver Caley Boone placed two well-insulated doghouses in his yard, so he would be safe and warm until he was ready to come inside to his heated room. Then, letting Lakota go at his own pace, Caley and the other caregivers worked patiently to earn his trust, taking care not to crowd him and make him even more afraid. It was a delicate balance, but necessary if Lakota was to lead a happy life around people, and eventually find a home of his own.

Eventually, Lakota built up enough trust to let himself be coaxed inside with food and treats. Caley and the other caregivers kept working with him. Finally, after five months of love and patience at the Sanctuary, Lakota crawled into Caley’s lap when she sat on the floor.

Little by little, over the next year, Lakota began to let go of his painful past. He gained confidence, made new friends, and started to enjoy cuddling and giving kisses. But, because he was still really shy, he was going to need to find a very special home. 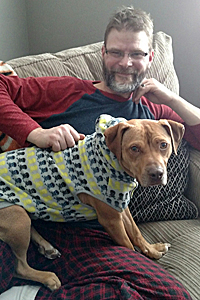 Briana Buban-Vonder Haar and her husband, Steve, had previously adopted a dog rescued from the same dogfighting bust as Lakota. That dog, Buster, brought Briana and Steve a lot of joy. Sadly, he passed away the summer after they adopted him. The Vonder Haars had a hole in their hearts and an empty space in their home. They knew that Buster would want them to help another dog like him. And that’s when they found Lakota.

On a Saturday in early November, Lakota took the first of many brave new steps. He let his caregivers help him into Briana’s car, and he set off for his new home near Boise, Idaho. Upon arriving home, Lakota met his new dad, Steve, and two doggie brothers, Gunner and Tucker. He liked Steve instantly, and though he was a little overwhelmed at first, he hit it off with the other dogs, too.

Crossing the threshold into his new adoptive home

As it had been in Dogtown, going inside the Vonder Haars’ house was a momentous event for Lakota. He was scared, and flattened himself to the ground a few times, but Briana told him to be brave, and he crossed the threshold.

Now, two months later, Lakota continues to make strides. “He's getting more comfortable with different areas of the house,” Briana says, “and is on the brink of the major breakthrough of coming out of ‘his bedroom’ without an escort or a leash. He’s even worked up the courage to overcome his fear of coming in the back door. He has such a brave little heart, and he is an absolute joy. With him, every day is the best day of his life, and you just can't help but smile at his enthusiasm.”

Keep up with Lakota in his new home via his Facebook page.

To help more animals like Lakota go from homeless to home, become a Best Friends member.