A dog with separation anxiety gets a makeover

Image
Senior Chihuahua with separation anxiety is adopted by a stylist at the Fabio Scalia Salon Soho in NYC and is now enjoying lots of love and attention.
By Nicole Hamilton

He’s as comfortable at his country home in Connecticut as he is at his home in New York City. He’s a seasoned subway rider, enjoys visiting restaurants, loves putting in the hours at Fabio Scalia Salon Soho, and he shares it all on Instagram.

Not bad for a senior Chihuahua who was once surrendered to a municipal shelter before coming to Best Friends Pet Adoption Center in New York City. It’s there that he would meet Lucio and Louie, a couple determined to give Kikko a great life.

When Kikko first arrived at the pet adoption center from Animal Care Centers of NYC, he had very bad separation anxiety and would shake and bark in his kennel the moment people walked away from him.

“He didn't want to be left alone,” says adoption specialist Suzanne Remito. “He loved to be held and was very happy with people. Sometimes staff would just sit in the back in the dog suite area and hold him while doing work.”

That attention really helped Kikko, who gradually let his guard down enough to meet admirers. (And this cute guy had many.)

With his kind and gentle demeanor, adorable face and tiny stature that was perfect for New York City living, Kikko was the total package — almost. His separation anxiety challenges gave pause to potential adopters, and although adopting a senior pet comes with a whole lot of benefits, many families were wary of adopting an older pet like Kikko.

Kikko needed someone special who would look at him and see him as perfect just the way he was. And in Kikko’s case, that person was closer than anyone would have thought. In fact, he was right next door. And better yet, he made a living helping others look and feel their best.

When the adopter is just next door

Lucio and Louie were interested in adopting a dog, but they had to make sure it was the right one. Since their life in the big city involves subway commuting, long days at work and evenings out with friends, they knew they would need a dog who could accompany them wherever they went; so, adopting a big dog wasn’t a good idea.

Lucio is a stylist at Fabio Scalia Salon Soho, next door to the pet adoption center. Occasionally, staff would stop by while out on a walk with a dog from the center. That’s how Lucio met Kikko. When he heard about Kikko’s separation anxiety challenges, he was a little tentative about the idea of adopting him, but he decided to visit Kikko anyway. 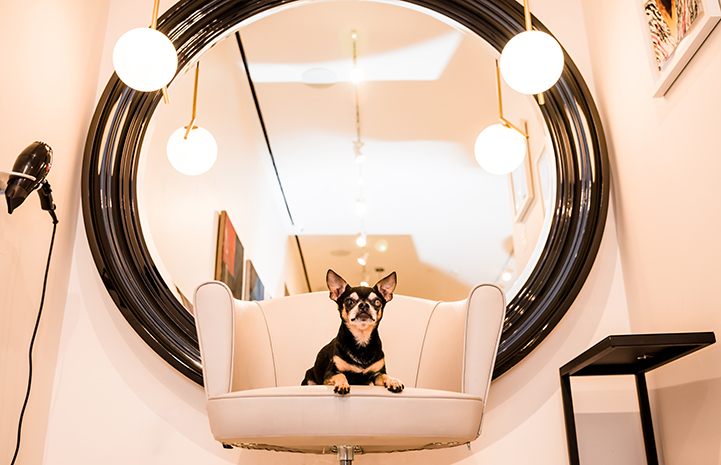 “We had a little meet and greet and he was kind of glued to me,” says Lucio, who learned that day that others were interested in adopting Kikko, too. He went home that night and told Louie about Kikko. They agreed that they would have to act fast if they wanted to bring him home.

It almost didn’t happen. Lucio learned the next day that Kikko was in the process of being adopted by someone else. “We figured it wasn’t meant to be,” he says. But that adoption didn’t come together, and he and Louie took it as a sign that Kikko was meant to be with them.

The next day, Lucio stopped by the adoption center and adopted Kikko. The little dog spent the rest of the day by his new dad while he worked. Then later that night, he rode the subway home with Lucio. Louie met them on their way home, and Kikko’s love for him was instant. 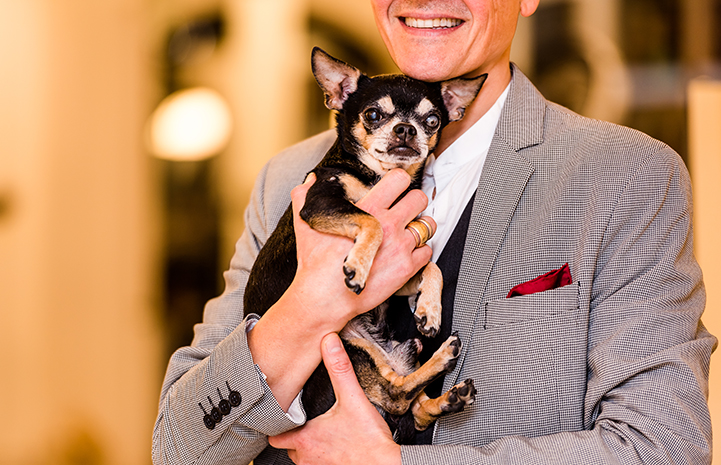 Within days, Kikko began feeling relaxed in his new home and anywhere he went with Lucio and Louie. Most days, he accompanies Lucio to the salon, where he either sits quietly by Lucio’s side or (when invited) on clients’ laps. Kikko even has a canine friend at the salon (Abby Rose), who is a lot younger and loves getting him to play. 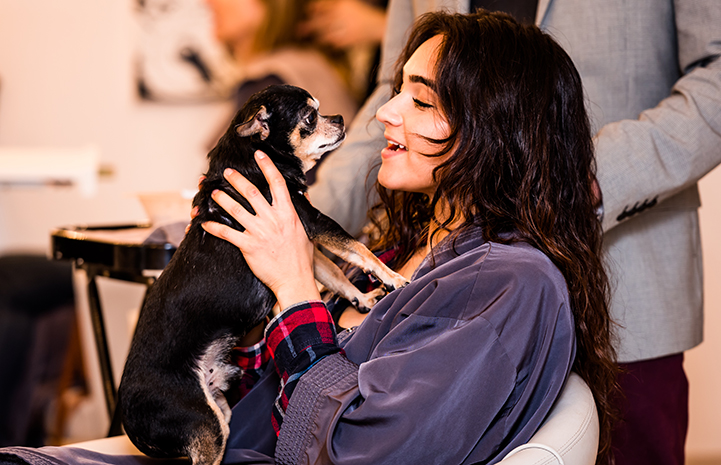 After work, Louie, Lucio and Kikko often meet up with friends at a dog-friendly restaurant for cocktails or dinner. On the weekends, Kikko and his dads usually venture to their home in Connecticut, where Kikko loves to relax after a long week in the city.

All that time that Kikko has spent in the company of others really helped him with his separation anxiety. In fact, when he was left alone during his first days in his new home, Kikko barked quite a bit. But now he barks a lot less. “He’s never alone for more than two hours,” says Lucio. “When I go out without him, he’s at the door waiting for me when I come home.” 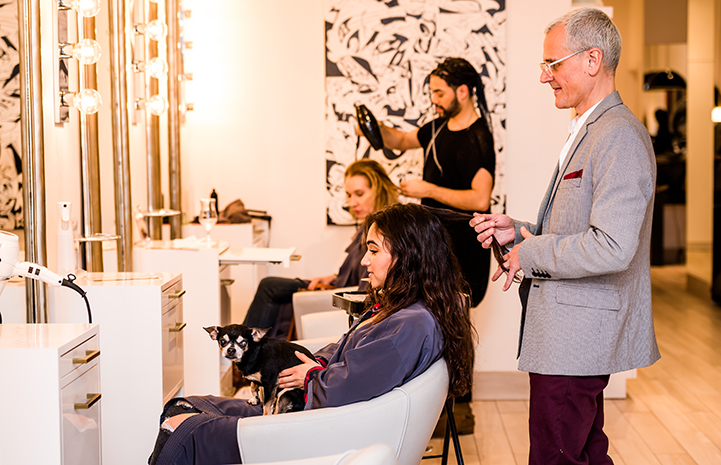 A senior pet is the perfect pet

Why is it that senior dogs make perfect pets?

The question, often posed to people who adopt older pets, causes Lucio and Louie to shake their heads. Lucio always adopted puppies, but now that he has limited time to train a young dog, it just made sense to adopt a senior pet. And when it came right down to it, Lucio and Louie didn’t care how old Kikko was. They adopted Kikko because of his personality.

“He’s blind in one eye and after 20 minutes of playing he wants to rest,” says Lucio. “But Kikko has made us look at the world a little differently now that we have someone to take care of, and we love it.” 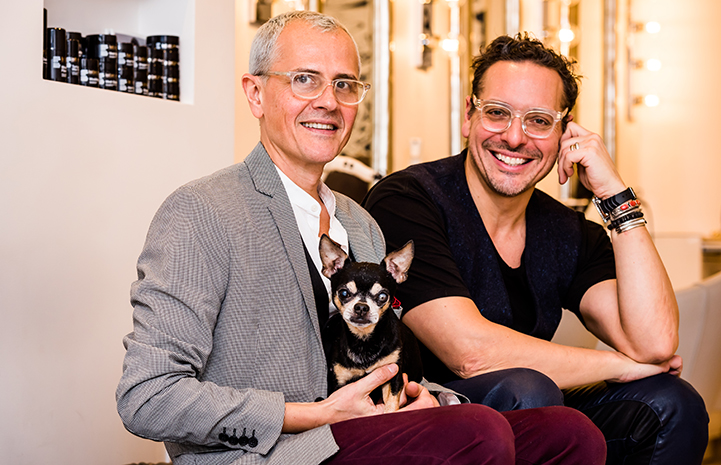