Dog slowly learns to trust people again after being abused

Image
When Phil the dog was rescued off the streets, it was clear he had been abused. He is making great progress learning to trust people again.
By Aimee Larsen

Phil the dog, a golden retriever mix, can tell you all about how to turn lemons into lemonade. The pile of lemons life dumped on him were a lot to juggle, but they are turning out to be just what he needs to make several overflowing pitchers of lemonade.

Stray dog rescued off the streets 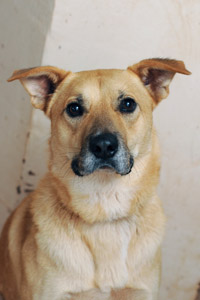 Things are now looking up for Phil.

Phil was about as down on his luck as he could get when he was rescued. An animal welfare group in North Carolina picked him up off the streets. He was in sad shape, with third-degree burns down his back and his collar embedded in his neck. He had obviously suffered severe abuse.

The rescue group did what they could to give Phil a safe respite from the difficulties life had dealt him. Then Phil came to the Best Friends Sanctuary to continue his recovery and look for a forever home.

"Phil was very shut down when he got here," says dog caregiver Tazmarie Christensen. "He didn't trust people." He was shy and especially fearful of men. He was also scared about being indoors. When inside, he would alternately pace, huddle in a corner, or stare out the window.

After Phil came to Best Friends, caregivers and trainers set to work to show him that life is worth living and that there are good, caring people in the world.

Phil’s emotional wounds are deep, but the only lasting physical evidence of his ordeal is scars around his neck that prevent him from wearing a collar. (A harness works just fine for him, though.) 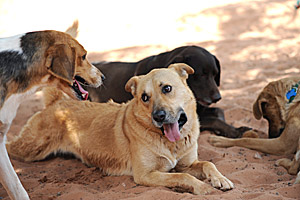 Best Friends staff is working with Phil to build his confidence. Dog trainer Tim Molina explains, "In order to do this, we are exposing Phil to new items. With each item that Phil becomes comfortable with, he gains a little more confidence. The items can be anything. We've used bubbles, a hula hoop, a touch stick, etc."

To help Phil become more trusting of and comfortable around people, trainers next plan to have volunteers hand-feed him. A few treats can go a long way to opening up the pathways to a dog’s heart.

There are also plans in the works for Phil to become one of the greeter dogs at the Fairway, the building where he lives at the Sanctuary. "The end result will be that Phil will be more confident around new people," explains Tim. "If all goes well, Philly Cheesesteak will actually want to meet new people."

Making the most of what life gives you

Phil is making great progress. These days, Taz says, "We sing to him ‘Philly Philly cheesecake,’ and he dances and turns wagging his tail and wants butt scratches." He has also become quite the ladies’ man, says dog team leader Kersten Muthreich, and would do well in a home with female dogs since he seems to get along well with them.

Adopt Phil or another pooch

Interested in adopting Phil or another dog from the Sanctuary? There are many deserving canines who would be so grateful to get a new lease on life in a forever home with you.