Image
Shy dog Sinatra has an artistic and creative streak. The budding canine photographer has discovered the joys of taking selfies of himself.
By Christelle L. Del Prete

Since being seized from a cruelty case in 2010, Sinatra has had a lot of healing to do. Before coming to Best Friends, he spent eight months in a Los Angeles Animal Services evidence facility. The shelter staff did the best they could for him, but Sinatra's spirit seemed wounded and he needed some intensive rehabilitation.

When he arrived at Dogtown, the striking blue-eyed dog was shy and withdrawn. Because he was so scared, he was difficult to handle and not very cooperative on a leash. He didn't want to go for walks or be close to anyone. When people approached him, he would freeze and sometimes even give a little "muzzle punch" (hitting the person with his muzzle) to warn them to stay away. In other words, "Ol' Blue Eyes" had a big learning curve ahead of him.

Sinatra is a young dog and caregiver Kathy Moore says that, in the past two years, with a lot of work and care, he has made tons of progress. The most striking improvements have come in the past six months. His leash skills are getting better and better. He's also developed an affinity for lounging in a kiddie pool on very hot days; and, although he is still a bit too shy to enjoy much petting from people, he has now begun petting them.

Sinatra's favorite thing is long hair. When long-locked caregivers or volunteers sit in his run, he'll come over and start poking his nose around in their hair, eventually rubbing his whole face in it, tail happily wagging the whole time. If his visitors sit quietly long enough, sometimes he'll also reach out with his paw and brush their arm. 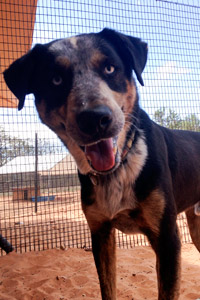 Perhaps Sinatra is really just a sensitive artist; he has certainly developed a talent for photography. His skills were discovered entirely by accident when caregiver Alyssa Hill got a new smartphone. Naturally curious, Sinatra wanted to check out the latest technology. So, when Alyssa was trying to get pictures of him for the Dogtown Facebook page, he grabbed the phone from her hand and ran off with it.

Luckily, the new phone was in a sturdy case, so Sinatra couldn't damage it with his mouth, or by dropping it in the dirt. Instead, he somehow figured out how to take pictures of himself and of his run mate, Cora (a shy hound mix who has also been making a lot of progress lately). The self-portraits came out so well that Alyssa doesn't mind handing over her phone to Sinatra whenever he wants it. And it's clear that Sinatra loves his new hobby. Alyssa says he gets really wiggly every time she brings her phone into his run; she senses that he thinks it's really funny and fun to do photo shoots.

The newfound sense of humor that Sinatra has is further proof of the great strides he has made since coming to the Sanctuary. His caregivers agree that, since his true personality has emerged, Sinatra is a different dog. He gets super excited when they enter his run, and he now loves going for walks with them, especially when Cora comes along. Says Alyssa, "He's a really good dog who would do great with a person who will let him be himself and not push him." Sinatra just wants to unleash his beautiful, fun, quirky self.

To learn more about Sinatra and the other adoptable dogs at the Sanctuary, go to the Adopt a Pet section of our website.

Photos by Molly Wald and Sinatra