Dog training to the rescue with advanced behavior program

Image
When behavior stands between a dog and a loving home, training through the advanced behavior program can turn things around.
By Sarah Thornton

When it comes to finding homes, large dogs in shelters are already at a disadvantage, but add a behavioral special need to the equation and that home might never come along. But all behaviors stem from something and there are ways to modify and manage them. Having special behavioral needs doesn’t mean a dog will never find a family. At Best Friends Animal Sanctuary, the advanced behavior program for dogs is there to help get behavior issues under control and get those dogs adopted.

Working in a quiet corner of Dogtown, caregivers collaborate with behavior and training consultants to set up individual training plans for around 10 dogs at a time. The focus is on improving the types of behavior that make it most difficult for dogs to be adopted: resource guarding, dog reactivity, fear of strangers and jumpy-mouthy behavior ― issues often linked to anxiety and lack of confidence that result in dogs making poor choices. 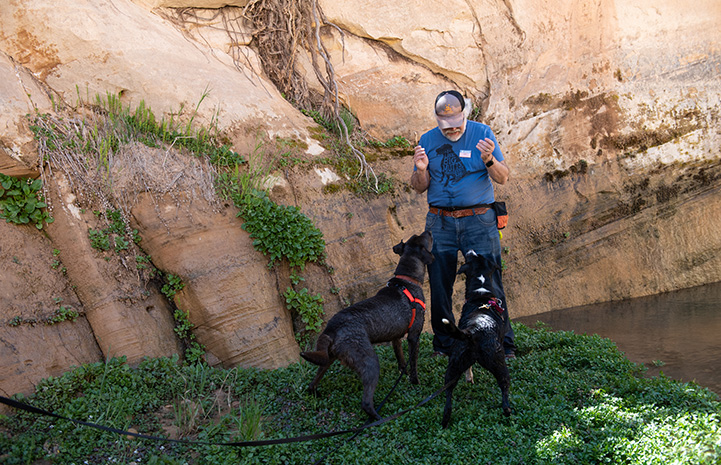 By figuring out each dog’s needs and building relationships and appropriate skills through the program, the loving dogs hiding behind those behaviors can come out and shine. Ninety days is the goal for graduation from the program but, as caregiver Debbi Carman says, “We want to go at their speed.” So, if dogs need another 30 days or more, they get it. The most important thing is getting behavior under control and getting those dogs home.

When the graduates go home or move to another area in Dogtown, their training plan goes with them, because ― just like with people ― changing behavior is never really over. It’s something that needs to be maintained and worked on. And, as Debbi says, “You always want to be mindful of what is affecting your dog.”

Jumpy, mouthy dog and a hidden medical cause

For as long as the advanced behavior program has been running, the big hound voice of Titus has provided the background music — consistently. He was always barking and jumping on everything, and when he was overstimulated, he got mouthy. “Because he’s such a big dog and he’s really insistent about it, it would really hurt,” says Debbi.

Before Titus moved into the program, his caregivers had already tried everything possible to curb the behavior. He’s a smart dog and with all the training he received, Titus quickly learned all sorts of tricks. But the barking, jumping and mouthing never stopped. 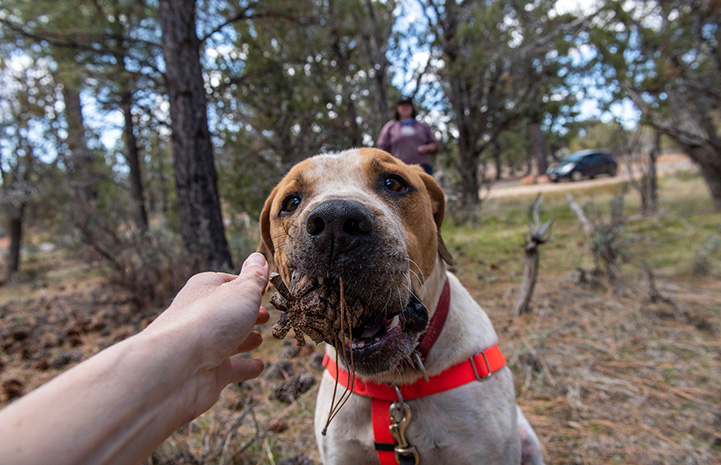 “There was nothing here that we could teach him to overcome that jumpy-mouthy behavior that he didn’t already do and know,” says Debbi. Staffers worked with him on impulse control games such as tug and flirt pole. Still, the behavior continued.

Even as they tried various training options to rule out different solutions, the cause of his behavior became more and more of a mystery. And then they noticed that he was shaking his head ― a lot.

It turned out that Titus had chronic ear infections. They were hard to detect since he wasn’t scratching his big, floppy ears or giving any other indication. Plus, detecting anything with Titus is difficult because he’s very uncooperative during vet checkups.

One sedated exam and ear cleansing later, Titus’ behavior completely changed. He was stretched outside in the sun, quietly resting. No barking, no jumping at the gate. All of it had been because he was uncomfortable. “He was just trying to tell us,” says Debbi, “but there’s nothing he would let people do to help him.”

With that mystery solved, they could focus on the next step — getting Titus, who’s never really lived in a home before, some house skills. 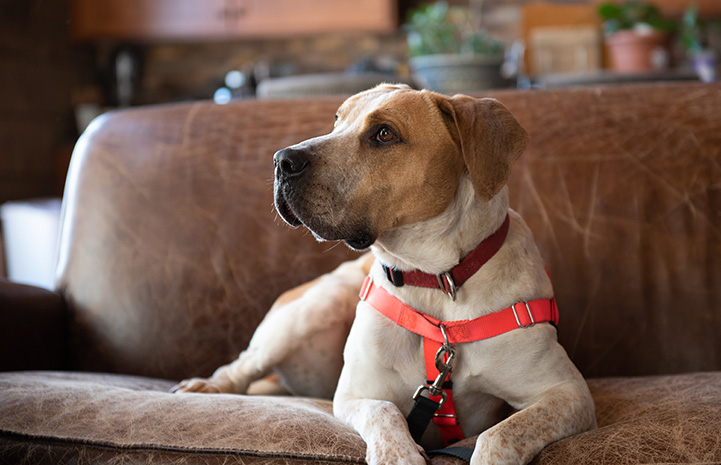 Trudy was living in a home when a traumatic incident left her so scared that no one could get near her, resulting in her being relinquished from the home. She was brought to Best Friends and the advanced behavior program is helping her overcome that extreme fear of strangers.

For her training, someone she doesn’t know stands a good distance down the path, while she and a caregiver approach the person. Every time she looks at the stranger, she gets a yummy treat. And if there’s one thing Trudy loves, it’s yummy treats. She got to the point where she’d look at the stranger and immediately look back for her treat, much more focused on that than some person who wasn’t doing anything. 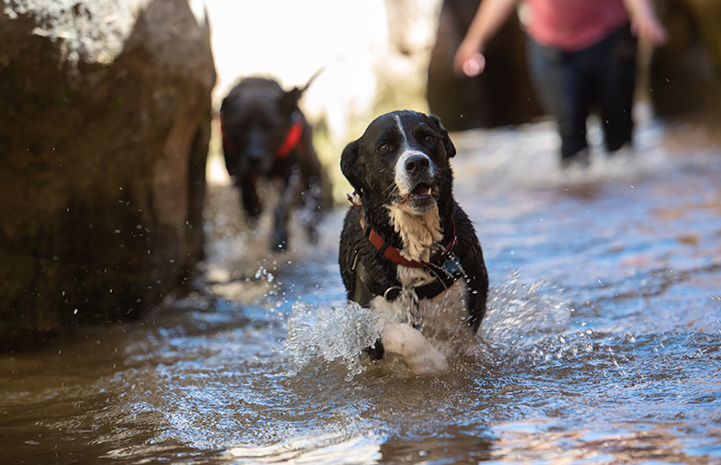 Once she was able to close the distance all the way and meet the stranger (who was waiting with even more treats), it was time to switch it up. Now, it was her waiting while the stranger approached, and that was a little scarier. But it was nothing that high-value treats couldn’t fix.

“She’s just the loveliest, cuddliest, sweetest dog in the world once she gets comfortable with somebody,” Debbi says with a smile. “And typically she’s gotten comfortable very quickly when treats are involved.”

She’s still sensitive about meeting men, and there’s potential that someone unfamiliar with dog behavior could do something that might scare her. So for now, she’ll remain at the Sanctuary, working on getting used to potentially scary situations out in the world. We’ll keep the treats coming. 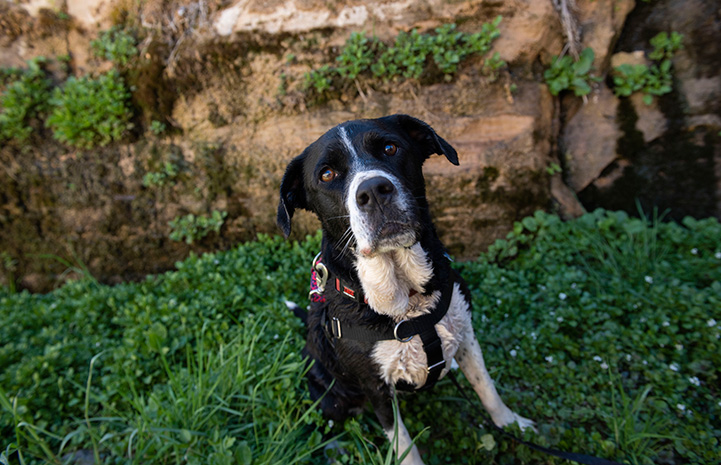 While it’s commonplace that people can be socially awkward, some dogs can be, too. And if we’re being honest, Bombay is one of those dogs.

He was adopted from the Sanctuary as a puppy but was eventually returned for getting into disagreements with the other dogs in the home. When he came back, he was reportedly so reactive to other dogs that even a picture of one would set him off. He needed to have his door covered up so he couldn’t see other dogs passing by. And he lived in the room nearest to the door so that he wouldn’t have to pass anyone to go out for a walk.

Dog reactivity to other dogs is common, but with Bombay it was extreme. He was so stressed out by other dogs nearby that, at first, training was almost impossible. “He’s not in a state where he can be learning when he’s just so overstimulated, over-threshold constantly,” says Debbi.

With fewer dogs around him during the advanced behavior program (and with additional motivation from a big spoonful of peanut butter), Bombay was able to begin training. 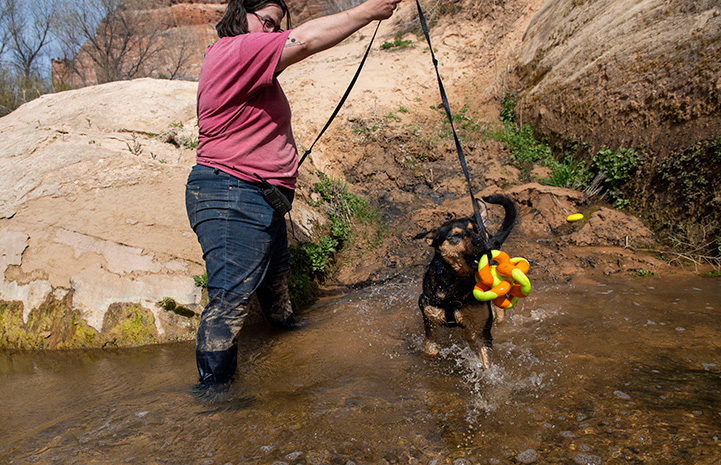 At the quietest time of day, caregivers would take him out, sit down and from a very long distance watch for passing dogs. As soon as he saw another dog, the spoonful of peanut butter was in his face and he got to enjoy a delicious treat. He was so good at looking for peanut butter and not reacting that he started going out at busier hours. “It wasn’t an immediate thing,” Debbi says, “but you could see the gradual progression over a few weeks.”

At first, Bombay was a little rude, but luckily the first dog he met was incredibly patient even though Bombay was trying to play like a puppy. He needed to learn when to back off and give the other dog space because he didn’t recognize that body language. That’s when the peanut butter spoon reappeared to reward him for moving away.

His second playmate was the perfect match for his high energy, and when things started to escalate, Bombay actually moved away on his own. The two dogs happily shared a water bucket and were able to have quiet moments during their playtime.

Bombay was ready to graduate. Even better, after graduating he moved next door to his favorite playmate. He still has his own space, but regular play dates are keeping both dogs happy. 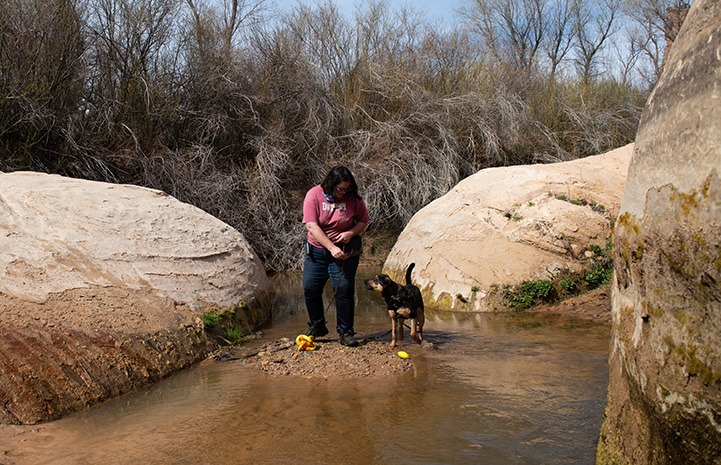 Each dog in the advanced behavior program is making outstanding progress and the number of graduates continues to grow. Whether they have a behavior that can be quickly modified or one that takes a little longer, they work at their own speed until they’re ready to go home — while getting lots and lots of treats along the way.