Image
Yuma the dog can't stand other dogs and is reactive towards them. She needed to be adopted into a home where she is the only dog. Read her story.
By Lindsay Hutton

The dark patch of fur over her right eye is the only mark on Yuma’s white, shiny coat — when she’s clean, that is. During the years she spent in Dogtown, Yuma often wore the gritty red sand of Angel Canyon (where Best Friends Animal Sanctuary is located) like a glorious cape. At 11 years old, she’s a senior citizen and a longtime resident, and as far as anyone knows she spent nearly her entire life in and out of shelters before coming to Best Friends. But she remained homeless for so long because of a different mark: She really doesn’t like other dogs and can’t live with them.

Well-known for her playful, affectionate nature and well-loved by the staff, volunteers and visitors to the Sanctuary, Yuma was featured as a volunteer favorite in 2018. She was known for rolling exuberantly in the sand near her dog door or lying there like she was sitting on her front porch, according to Becca Woodruff, behavior consultant and one of Yuma’s caregivers.

Everyone loved Yuma and wanted her to get adopted, but that second mark (no other dogs for her) was a formidable barrier to adoption. Yuma needed to be an only dog, and most potential adopters who come to Best Friends already have at least one. 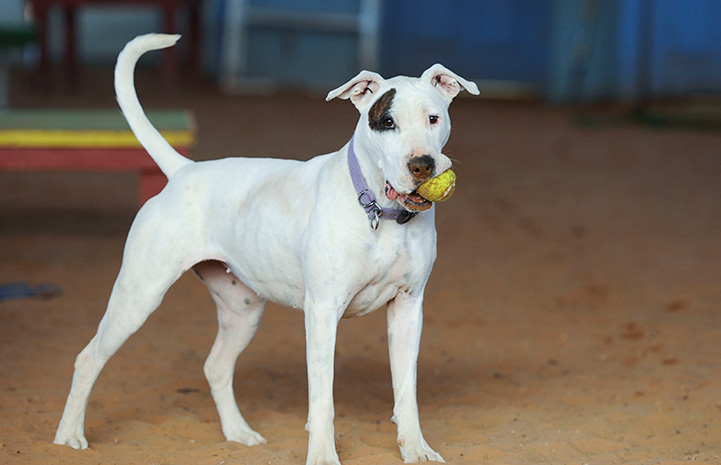 Becca says dogs that must be the one and only in a home typically take longer to be adopted. At the Sanctuary, behavioral consultants and other staff work with dogs like Yuma to reduce their anxiety and manage reactivity to other dogs. They use training techniques, such as the game “look at that,” parallel walking (where dogs are walked in the same vicinity of others, but not too close) and muzzle desensitization.

Yuma learned sit, down and shake, was trained on the agility course and given food puzzles — all things to enrich her life at Best Friends. She flourished and was fun to work with. “She was very eager to learn and to participate in training,” Becca says, adding that she became a “project dog” for many, but in turn, enriched the lives of her caregivers.

For example, Kelle Bruckman, a Best Friends volunteer for 11 years who has made more than 40 visits to the Sanctuary, says she felt “very lucky” to be the first person asked to accompany Yuma and her caregiver on a walk. Eventually, she took Yuma on walks by herself, spent time in her run and took her on outings and sleepovers. The two grew to know each other and be friends. 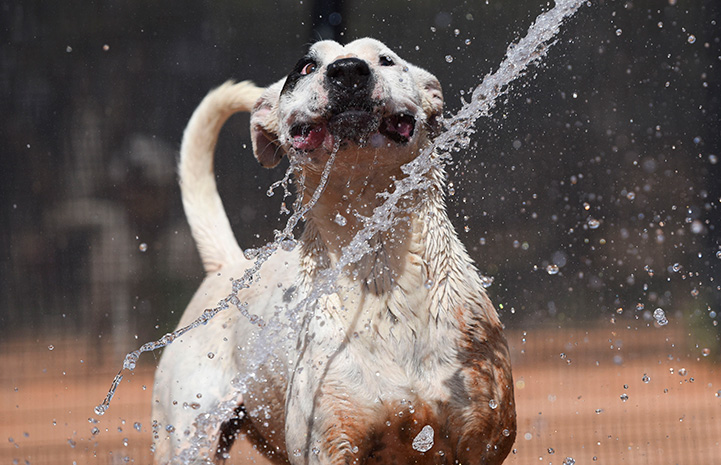 So much love for Yuma

Because she loved Yuma so much, Kelle had the dog’s name tattooed on her upper left arm with a purple paw print underneath. For several years when she encountered health issues that sometimes left her with less energy during her volunteer visits, Yuma’s loving and caring demeanor brought her comfort. It broke Kelle’s heart each time she had to leave Yuma at the Sanctuary. But she already had two dogs at home and she wanted Yuma to be in the best situation to be happy. She also knew that everyone at Best Friends loved Yuma and would never give up on her.

In a video taken at Yuma’s birthday party, the staff sang as she walked up to each person to be petted. She wore a plastic party crown over her ears, her mouth was relaxed and open, and her brown eyes soft. It’s easy to see why Becca and co-worker Haylee Heisel, also a behavior consultant at Dogtown, were champions for Yuma. “We kept saying that this is the year she’ll get adopted,” says Becca.

Like many other pets who need to be the only dog, Yuma had all the characteristics of a great companion. She was energetic and fun. She was a snuggler. And beyond her reactivity to other dogs, she had no other behavioral issues. According to Becca, when it came to things that could indicate behavioral issues (car rides, receiving medical care, meeting new people, you name it), Yuma could easily do it all. She only had that one issue that seemed to keep getting in the way — that is until Mary Hardy came along.

A doggy hug and a new home

Mary was looking for a new dog friend. In July she had lost Buddy, her corgi-Jack Russell mix, to cancer. Mary always had rescue dogs and never shied away from taking in an animal who she felt had chosen her. “I let them decide, really,” she says. “I usually don’t know what problems or injuries they have until I say ‘OK — he or she’s mine.’ It’s just mostly up to the animal.”

Most of the dogs Becca cared for had issues. Her previous dog, Ivan, had a host of medical challenges, and when he passed away, she had him buried at Angels Rest at the Sanctuary.

After losing Buddy, Mary decided to make the four-hour drive from Salt Lake City to Kanab to visit the Sanctuary. “I had visited the website and I figured if I was going to go down there, I might as well come back with a dog,” she says. In fact, she had already emailed the Best Friends staff about a dog who she eventually met, but it didn’t work out. “That dog wasn’t the one for me,” she says.

Then the staff introduced her to Yuma, whose picture she had seen online but whose story she hadn’t yet read. It was just as well, because what really led Mary to adopt was something that Yuma did that was also something that Ivan had done.

“Ivan always had a thing where if he thought something was upsetting me, he would come and put his forehead to my forehead, and we would see eye to eye,” she says. “He did that the day I had to put him down.”

When Yuma walked straight up to her, leaned forward and pressed her forehead to Mary’s, she was stunned. Becca says it’s the equivalent of a doggy hug. “That pressing is an affiliative behavior,” she says. “It shows that the dog is making connection with that person. It’s what we love to see.” (Not to mention, it was doubly meaningful to Mary.) 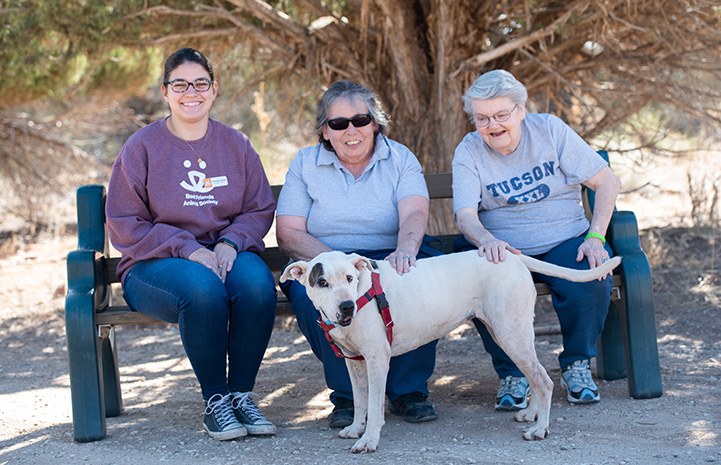 A hiccup in a happy adoption

It seemed that the barrier had finally been overcome, and in a way, it had. Mary had adopted Yuma because of the bond she felt with her. She didn’t have another dog, so Yuma could be her one and only. But there was another challenge ahead. Though staff had thoroughly explained Yuma’s reactivity to other dogs, Mary didn’t realize how serious it could be or that the move to a new environment could cause some regression.

When they arrived home at Mary’s house, Yuma went after one of the neighbor’s dogs, and  over the next few days several other incidents took place. Feeling that she had to return Yuma, Mary loaded her into her Nissan Rogue and started the long drive south toward Kanab.

On the way, she thought about Buddy, Ivan and the other dogs needing help who had come into her life. “As I got closer and closer, my heart got heavier and heavier and I just kept thinking: You’ve taken on rescues, you’ve done rescues all your life, and you’ve taken on some very serious cases. This one’s not going to be any different.”

As Mary pulled into the Sanctuary four hours later, she realized that she couldn’t give Yuma up.  “Yuma needs a home. She deserves a home. I’ll work around her problems.” Mary resolved to give Yuma a place and people of her own, and with that, she turned the Rogue around and headed home. 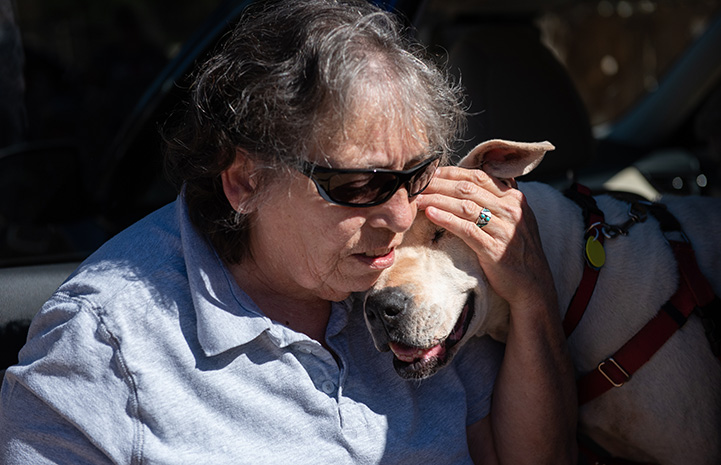 More training and support for Yuma

Yuma has been living with Mary in her new home for three months and is making great progress. She works with a trainer twice a week, and Mary says she can take her for a walk (with advance notice about other dogs). The reconditioning helps manage Yuma’s reactivity, and it’s preparing her for a place in her new life as Mary’s dog.

Every year for the past 20 years, Mary has rented a cabin in Moab, Utah, where she was born. The tradition of renting the cabin includes bringing along her canine companion for hikes and taking in the scenery. "Hiking there with an animal is the ultimate for me,” Mary says. “Playing in small pools of water, chasing rabbits and lizards, turning red with the sand and just being — that is the best."

Mary is working to have Yuma ready to go in April, so she can enjoy the cabin like the other dogs have. In the meantime, her dog frolics in the cold water from the garden hose, runs through the sprayer and makes Mary laugh. She sleeps in Buddy’s bed, unconcerned that the bed was made for a much smaller dog or that she has a bigger bed that Mary bought for her. She has adopted his tennis ball-sized stuffed panda bear toy. She has her people and her home. A bond has replaced a barrier. 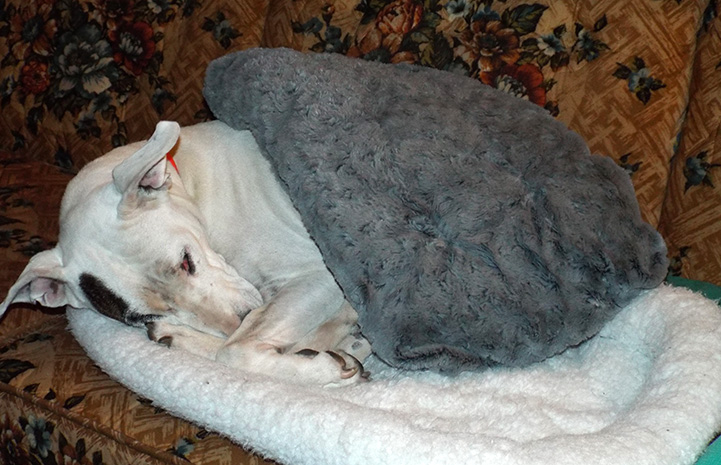 Sometimes our old friends lead us to our new friends. We don’t lose them. We remember them and we grow as we open ourselves to new relationships. Yuma’s story reminds us that the mark of a friend, a trusted companion with whom we can share our lives, is one we recognize and cherish. 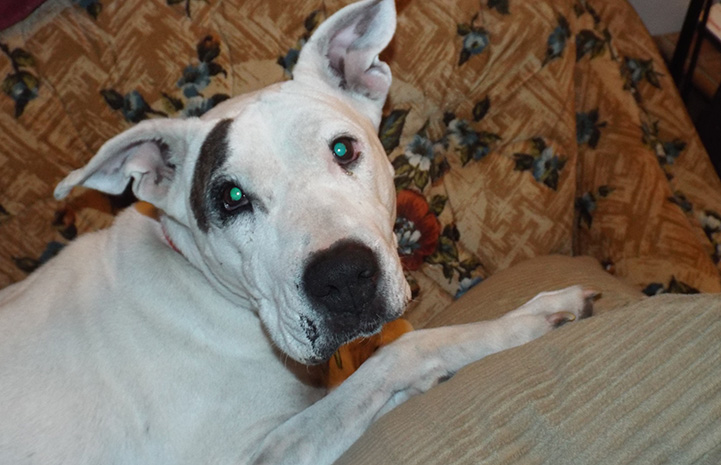 Photos by Molly Wald and courtesy of Mary Hardy