Image
Tuco the black Lab works hard at training, including overcoming his food guarding tendencies, and relaxes by enjoying time in the dog park pool.
By Christelle L. Del Prete

Nobody makes a bigger splash in Dogtown than Tuco when he jumps into the dog park pool. It’s hard not to laugh when he sticks his face right into the water sprayer or chases bubbles around the pool. “He would probably live in the water if he could,” says Julie Tasch, Dogtown operations manager.

The pool is Tuco’s happy place. There, the fun water-loving dog has total freedom to indulge his goofy side. But when Tuco is on dry land, he’s doing a lot more than sunbathing poolside. He’s leaping with all four feet into training focused on helping him get ready for another kind of happy place — a home of his own.

The two-year-old black Lab mix came to Best Friends from local animal control. Though Tuco is young, he has a history of handling challenges and food guarding. He’s not fond of having his feet or belly touched, and he gets defensive if anyone approaches him or his food bowl while he’s eating.

With the help of Dogtown caregivers and trainers, Tuco is learning to work through these issues so he’ll have the best possible chance of getting adopted.

Helping a dog with food guarding 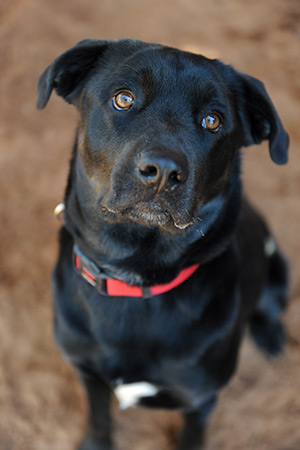 Caregiver Zach Mills chose Tuco as his “project dog” — a dog to whom caregivers devote extra time and attention in order to overcome a specific challenge or two. Along with Dogtown trainers, Zach has been working on a training plan to help Tuco overcome a tendency to guard his food bowl. It involves getting Tuco used to people approaching his food bowl by adding food to it — first when it’s empty and then while it’s full.

As the training plan progresses, Tuco will learn to allow someone to touch the bowl before adding food to it, and then to let someone pick it up briefly before adding food. Zach will also work to teach Tuco how to trade items of value to him, so that eventually the dog might willingly trade his full food bowl for a highly desired treat.

The fact that Tuco doesn't like having his feet or his belly touched can make medical or general handling tricky. Following a training plan for dogs sensitive to handling, Tuco’s caregivers start at his comfort level and gradually extend it to more sensitive spots. For example, since Tuco is OK with his shoulders being touched, caregivers start there and work down his legs toward his feet.

Plunging into the dog pool

Learning these skills — how to tolerate more extensive handling and to be more polite around food — will help Tuco when it’s time for him to move on to his forever home. In the meantime, he’ll keep having a blast in Dogtown, whether he’s chasing a ball around his yard, romping with his doggie pals or experiencing the pure joy of plunging into the dog pool. 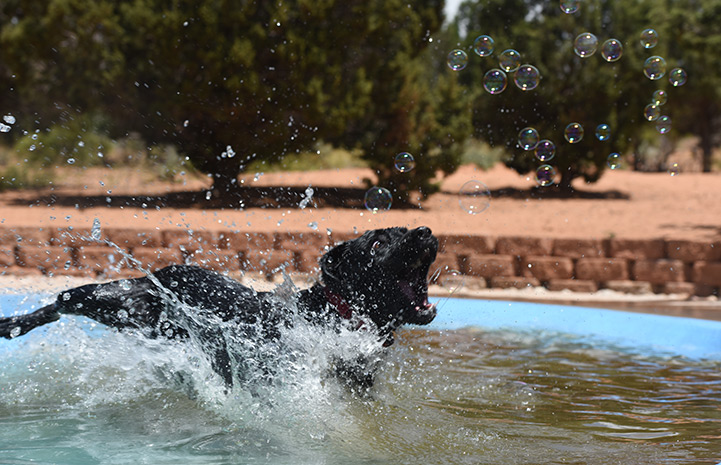