When Gus Gus the Yorkie dog first arrived at the Sanctuary, he was in really rough shape. The little dog suffered from mange, and the resultant skin irritation and hair loss made him look more like a gremlin than a Yorkie. The type of mange that Gus Gus had (demodectic mange) is generally not contagious to humans or other dogs. But Gus Gus' condition was so severe and painful that he had to be sedated during his treatment. 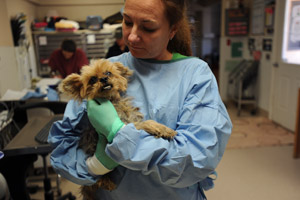 In addition to mange, poor Gus Gus had a host of other problems, including dental disease that required tooth extractions, stomach issues that required a special diet, a suspected heart murmur, and immunosuppression. A number of these health issues might have been blamed on old age if it wasn't for that fact that Gus Gus is a few months shy of eight years old. That's approximately half of the estimated lifespan of a Yorkie.

And, as if all of the medical challenges weren't enough for the little dog, Gus Gus wasn't sure he could trust the people who were trying to help him. While he expressed an interest in his caregivers, and a desire to interact with them, the quiet, introverted dog was clearly reluctant to put himself out there. This apparent lack of socialization, along with Gus Gus' physical condition, seemed to indicate that he had spent most of his life in a puppy mill.

A puppy mill is a commercial breeding operation in which the "breeding stock" are kept in cramped and often filthy cages and forced to produce litter after litter. The puppies are shipped to pet stores, advertised in the classifieds, or sold online to consumers who believe that they are receiving healthy animals from reputable breeders. Because the standards of care are so low in mills, diseases and genetic mutations spread quickly. It isn't hard to see how a dog who has spent time in a puppy mill could end up in Gus Gus' condition.

Yorkie rescued from a puppy mill 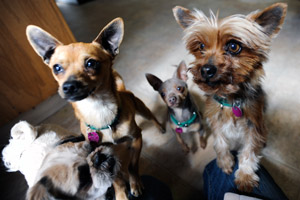 But Gus Gus was one of the lucky ones. He was rescued from the mill and came to Best Friends through Salt Lake County Animal Services in November. Since his arrival, he has improved dramatically. Once the veterinary staff cleaned him up and got his medical conditions under control, his caregivers got right to work helping Gus with socialization. He then took up residence in the Best Friends laundry room, where he spent his days romping with two Chihuahuas and a Shih Tzu.

In fact, though Gus Gus still faces some health hurdles, he has started to feel much better and has become much more playful and outgoing. These days, he’s looking a lot more like a Yorkie than a gremlin, too. Vicki Roemhild, a housekeeper who spent the last few months with the little dog and his playmates, says it was hard not to get attached to him. But she’s happy that something wonderful has happened to Gus Gus. He found a forever home at the Best Friends super adoption event in St. George this past weekend. He’s now gone to his first real home, and, hopefully, his last.

To adopt one of the other Sanctuary dogs, click here.