Doubling the love with “The One” 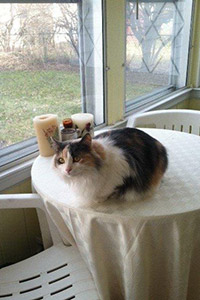 Crystal is a bit of a diva. It would take a patient person to bring out the calico cat’s warmth. She has a long, luxurious coat and amber eyes that belie a devilish streak. Indeed, she is as gorgeous as she can be mischievous. She’s been known to brandish a claw or two when the mood strikes. The somewhat finicky and misunderstood girl was rescued from the city shelter by Ten Lives Club in western New York. It would take a special adopter to give Crystal a happy home, but luckily for her that’s what “The One,” the Best Friends adoption promotion, is all about.

Cats of every stripe welcomed

Ten Lives Club is a member of the No More Homeless Pets Network, a Best Friends program that works with rescue organizations and municipal shelters across the country to end the killing of dogs and cats in our nation’s shelters. As a coalition member, the group is eligible to participate in Best Friends adoption promotions. Executive director Marie Edwards is especially enthusiastic about what that means to her organization. In addition to offering pets at a reduced adoption fee, promotions include professionally designed, ready-made marketing materials that help bring more adopters to their shelter.

In addition to rescuing at-risk pets like Crystal from their region’s municipal shelters, Ten Lives Club is one of the few shelters that specializes in saving cats with the feline immunodeficiency virus (FIV), a virus that weakens a cat’s immune system, from all around the country. Marie says, “Many people just don’t understand what FIV is.” But the cats can live long, happy lives, and Ten Lives Club helps them find homes when others won’t. “At any given time, we have over 50 FIV cats ready for adoption,” says Marie. “Most of our cats are from the city shelters in Erie County. We take in about 60 per month.” 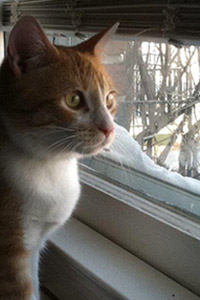 Cara Abbarno had been heartbroken since she recently lost her 12-year-old cat. She smiled for the first time in months when she saw a photograph of Tiger Boy, a five-month-old stray, on the Ten Lives Club website. Cara went to the adoption event and doubled down. “When I saw Tiger Boy playing with Crystal, I said, ‘I’ll take them,’ ” says Cara. She redubbed them Tommy and Gina.

“It’s been five months since (my cat) passed and almost three months that I have had Tommy and Gina, and I could not be happier,” says Cara.

Thanks to “The One” promotion, over 2,100 pets found homes nationwide. Crystal (aka Gina) is just one of the 69 cats who were adopted during the promotion from Ten Lives Club. Cara adds, “From the first night, the three of us slept in the same bed, Gina at the foot of the bed and Tommy as close to me as he can get. At first, Gina would just let me pet her for about five seconds. That’s all changed. She is coming around now, sleeps closer to me, lets me pet her and even hold her. Tommy, Gina and I all have a bond that I can’t explain.”

Promotions like “The One” are just one way that, together, we can Save Them All. Learn what you can do.