Image
Drug sniffing (detection) dog comes to the Sanctuary for treatment for heartworm disease and re-employment. He has fully recovered from his illness.
By Christelle L. Del Prete

A few months ago, Eni — a highly trained specialist in the prime of his life — had it all, including a dream job as a narcotics-sniffing dog with a sheriff's department. Eni (pronounced ee-nigh) was great at what he did, and he was happy and well loved by everyone who knew him. But everything fell apart when he contracted heartworm disease.

Because heartworm disease is so rare in the area of the country where Eni worked, the illness blindsided those who know and love the hard-working dog. With his health failing and his future uncertain, poor Eni had few options. Worst of all, he was running out of time to get critical medical help. Heartworm is a serious disease that requires careful treatment, or it can be fatal.

Lifesaving treatment for heartworm for dog

Luckily, no one was ready to give up on him. The sheriff’s department he’d served so valiantly started Eni on the first of a two-phase treatment. Soon after that, Eni was on his way to the Best Friends Animal Clinic, where the veterinary team members, who have treated many cases of heartworm disease, immediately rallied around him.

In the first couple of days, Eni got the lifesaving injections he needed. He even had a new job lined up and waiting for him. But, before he could return to his full-time duties, Eni needed some downtime. For two weeks, he could get only mild exercise; too much exertion would put a dangerous strain on his heart. 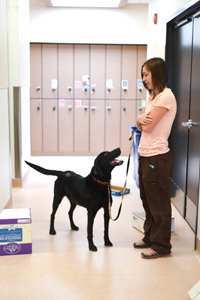 While it’s common for dogs and cats with serious illnesses or injuries to recover in the Best Friends Animal Clinic, Eni is not a normal pet dog. Nothing makes him happier than doing his job, and he has far too much energy to just lie around all day. So Best Friends trainers and vet techs stepped in to keep Eni as happy as possible during his stay, and that meant giving him a job. Or at least a version of his real job, but done purely for fun.

Eni needed a fun, challenging recreational activity that would keep his mind engaged but his body quiet and calm. The perfect solution turned out to be a modified version of nose work — a search and scenting sport that dogs love. Changing the rules a little meant that Eni could play the game without even leaving the clinic.

Back to his roots as a drug-sniffing dog

Dogtown trainer Emily Strong showed the vet techs how to set up the game: First, arrange five boxes in a loose cluster in a hallway of the building, and then toss a tasty treat into one of them. In the beginning, Eni only had to find the box with the treat in it. As he caught onto the game and responded to the “find it” cue, the boxes were moved further apart.

Eni delighted in the sport, which took him back to the roots of his training as a drug detection dog, and kept him doing what he does best. By the time he was ready to go back to work with a new police department, Eni had kept up his sniffing skills and, best of all, he was feeling great.

Though Eni didn’t call the Sanctuary home for very long, his time in the Best Friends Animal Clinic helped him heal his heart, get back on his feet, and find an exciting new job. Once again, Eni has it all.