Image
Shy dog puts the past behind her.
By Christelle L. Del Prete

Sometimes, it can take years for dogs who haven’t been properly socialized to come around and place their trust in people. It could easily have been this way for Edie, who spent the first six years of her life in cramped quarters with an overwhelmed caregiver. She arrived at the Sanctuary last April, too shy and afraid to interact with anyone.

Dogtown caregivers didn’t push Edie because they knew she’d have to go at her own pace. Instead, they looked for ways to connect with her while still respecting her boundaries. And they got some unexpected help from Edie’s canine roommate Gretel, who arrived at the Sanctuary with a broken foot. 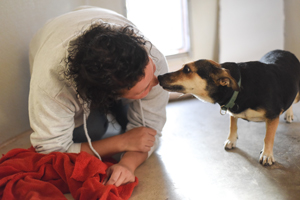 Gretel’s caregivers had to ice her sore foot several times a day. Curious about what they were doing, Edie would creep up close to watch. And that’s how her breakthrough happened. Dogtown caregiver Sam Woyak says, “I was icing Gretel’s foot one day and petting her, and all of a sudden, there was Edie letting me pet her, too.” Before that, Edie would only dance up nervously to people, lick their fingers and then dart away. But that day, she stayed.

Edie had given Sam a clear sign that she was ready to put the past behind her. It was a big, brave step for the shy dog, and her caregiver was delighted. Once Gretel’s foot healed, she was quickly adopted, and Sam continued to spend as much time as she could with Edie. Sam would sit in Edie’s room, petting and talking soothingly to her until Edie trusted her enough to let Sam pet first her head, then her neck under her collar and then her legs.

It took about a month, but Edie finally allowed Sam to give her a belly rub. That was a big day. The next step was to get Edie leash-trained so that she could enjoy walks with caregivers and volunteers, and increase her chances of being adopted. At first, Edie would only allow Sam to put a leash on her collar inside of her room or yard to drag around by herself. Then, she started venturing out of the yard with someone holding her on a 15-foot leash.

The length of the leash made her less afraid of the person at the other end of it. But it also made it easy for Edie to get tangled up in the scrubby desert vegetation. She soon learned to wait to be untangled, or to circle back to Sam for petting and encouragement. Finally, she was walking close enough beside her caregiver to graduate to a normal-length leash. 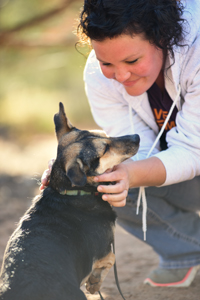 Though Edie’s progress has been steady, Sam knew that Edie needed to accept other people into her circle so she could find a home. With Sam’s support, Edie started stepping out with other caregivers and volunteers. As a result, her comfort level around strangers increased dramatically. She now regularly hits the trails with volunteers and rushes up to her gate to greet new people.

The first thing she’ll do, still, is run up and lick people’s fingers. That’s how she decides whether or not that person’s OK — though these days, nearly everyone is OK.

Since her intensive one-on-one sessions began three months ago, Edie has managed to completely break out of the mold of a shy, withdrawn dog. She may not feel quite ready for the limelight yet, but Edie’s quickly transforming into the little socialite she was always meant to be. She just needed patience and care to realize it.