Image
Litter of puppies come to Best Friends who are very energetic and rambunctious. One, in particular, is especially smart and in need of socialization.
By Aimee Larsen

"Most of the time we just get normal, happy puppies," says caregiver Wendy Williams. The "bird puppies," on the other hand, who came from a Native American reservation in Arizona, are anything but average. They are like those kids in school who were overly rambunctious to the point of being disruptive enough that their desks had to be moved apart.

Theme-named after birds to make it easier to keep track of these rascals, the bird puppies — Maleo, Falcon, Kiwi, Kite and Ibis — are giving caregivers and trainers a run for their money. Dog team leader Michelle Logan says, "When worked with individually, it was very apparent that these puppies were very smart. We think this is why they got into arguments a lot — because they were bored and needed more of a challenge." 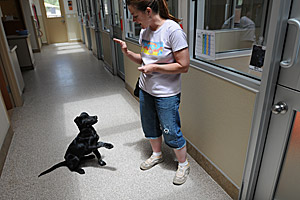 There’s one star pupil, in particular, who is such a smart cookie that trainers have had to rise to the challenge. "Ibis is especially intelligent," says Michelle. "She learns so quickly."

Trainers have taken on Ibis as a project, doing one-on-one training with her. She learned basics like "sit," "down" and "leave it" while barely lifting a paw. "You can (even) put a piece of kibble on her paw and tell her to leave it, and she will," says dog caregiver Tazmarie Christensen. No doubt about it, that’s pretty impressive for a pup so young.

As if Ibis’ growing list of skills isn’t irresistible enough, she can also shake and wave "hi," and she is working on "sneak," where she crawls on her belly across the floor.

Separating the rambunctious litter of puppies

Since the bird pups got into sibling scuffles when they first arrived at the Sanctuary, they had to be split into separate runs. Some are currently able to live with other puppies, but a few are living alone while they learn the manners necessary to get along with canine pals. 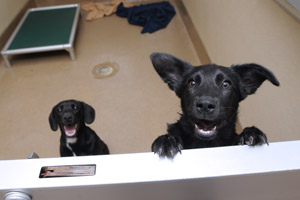 Ibis is now bunking with another pup. This is definitely a step in the right direction for her, but it is still challenging for Ibis to play with another dog around. Hence, there are no toys in the shared run.

Little by little, though, trainers and caregivers are helping to socialize Ibis and her littermates. The pups live at the Puppy Preschool, where they are introduced on a daily basis to various items that they will encounter in a home, including stairs, a vacuum, a fan and a doorbell. This is important to ensure that the pups will successfully assimilate into their new homes when they are adopted.

Ibis and her siblings are also slowly being taught how to interact with other dogs. They are introduced to other dogs who put them in their place in a nice way, explains Wendy Williams. Ibis has also had some successful playdates with Taz’s dogs.

Ibis and the other bird puppies are making great progress at the preschool and are learning to harness their brainpower and energy toward positive ends. Ibis, undoubtedly the teacher’s pet, and her littermates are ready, willing and looking forward to the next phase of their lives: being adopted into a loving forever home.