Tigger left behind his door dashing days and traded them in for long naps and relaxing time on the front porch of his new home.
By Sarah Thornton

During his time at Best Friends, Tigger the cat made quite the name for himself. His handsome tabby face popped up all around social media, as well as on the cover of Best Friends magazine, and it’s safe to say he gained a bit of a following. At the Sanctuary, he was known for his headstrong personality and escape artist habits, as well as the many ways caregivers worked with him to give him the enrichment and stimulation he needed to be happy. But it was when Tigger caught a ride from the Sanctuary to Best Friends in Salt Lake City that his life was about to change in a big way.

The cat who had spent so much time keeping his caregivers on their toes by looking for ways to get out and explore the great outdoors finally found his person. And it turns out that Tigger at home is quite a different sort of cat. 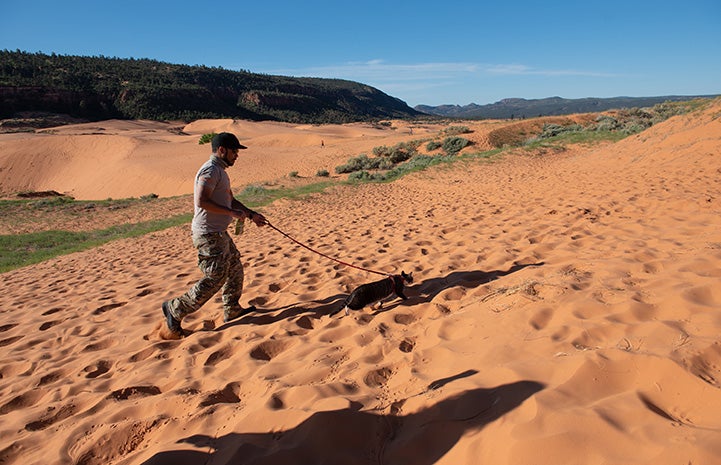 Tigger’s door dashing started when he lived with his first person in an RV park. Because of an injury, his person wasn’t able to give him enough enrichment, so he took matters into his own paws. He would dart out the door any time he saw an opening and wander around outside looking for something to do. It wasn’t the best or safest life for him.

By the time he got to the Sanctuary, he was an expert at slipping through open doors. Whenever a caregiver or volunteer would enter or leave his room, Tigger weaved past their feet and into the lobby before they could stop him. Fortunately, he wasn’t able to get outside, but it wasn’t so easy getting him back into his room.

While he had formed an unsteady peace with his feline roommates, that wasn’t the case with cats in the lobby. There was a whole lot more going on out there, with people shuffling around getting food and bedding for other rooms or tour groups coming through. Being in the lobby made Tigger anxious, and when someone would try to pick him up to bring him back to his room, he’d scratch and bite.

Tigger is one smart cat, though, and caregivers soon learned he was more than happy to put his smarts to work with clicker training. Getting him back into his room became easy once he had learned to walk right into a carrier on his own. Then, it was simply a matter of caregivers managing his high energy. 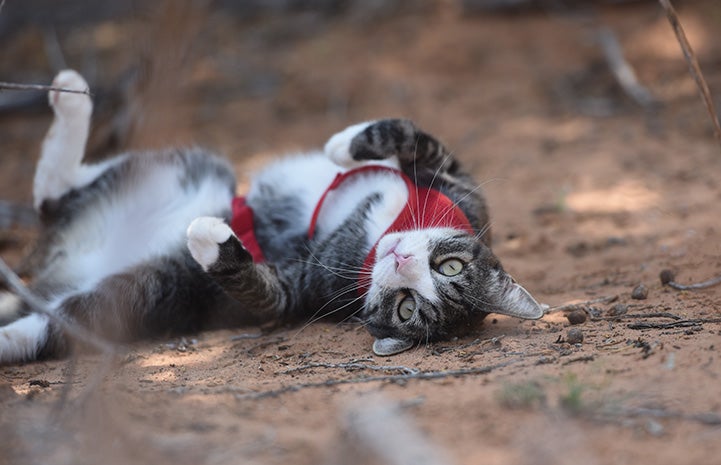 Tigger learned how to walk on a leash and ride in a cat stroller, and soon his caregivers scheduled daily walks and safe outside time for him. And when he had the chance, he even delighted in golf cart rides.

“Cats like him need some extra attention, but it’s so worth it for the bond that you get out of it,” says Brittany Wortham, one of Tigger’s caregivers at the Sanctuary. “It makes you feel special when a cat like Tigger decides to trust you.”

That’s how Tigger came to be so well-known. A lot of attention from many people every day kept him happy, so that’s what he got. Caregiver Edison Freebairn describes him as, “a hot rod of a cat,” and Tigger certainly has the attitude and popularity to match.

Life was good at the Sanctuary, but everyone was rooting for Tigger to get adopted and it didn’t seem to be happening there for him. So, to get even more eyes on him and give him the best chance for adoption, he was moved to Best Friends in Salt Lake City, and as it turns out, that was just where he needed to be. 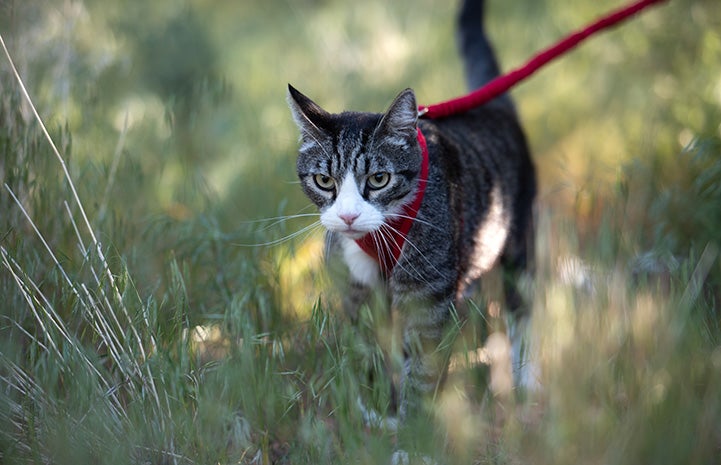 Sam DeMastrie had decided it was time to adopt a cat. Since he lived on his own, a feline friend seemed like exactly what he needed. And the first place he thought to look for a furry new family member was the Best Friends website.

Sam says he took the website’s cat quiz to figure out what pet he was looking for, personality-wise, and the results produced several matches for him. Then he exchanged emails with adoption specialists to further narrow down his choices, and eventually one of them suggested Tigger.

Then followed an exchange of photos and discussions about Tigger’s personality. When Sam checked out the online profile, Tigger seemed like the perfect fit. “It just seemed like his personality kind of lined up with mine,” he says. “He wasn’t the most bubbly, friendly cat ever and I didn’t need that anyway. He’s kind of more chill and likes to be on his own and not in a high energy environment, so I thought that would work out quite well. And I get outside all the time, too.”

Tigger didn’t waste any time checking out his new home. He explored every inch of the apartment, picking out the good hiding spots and making sure there weren’t any other cats he had to share with. And then, satisfied, he settled in. Sam says Tigger has his moments when he just wants to be left alone to nap, and he’s not shy about letting Sam know. But they’re both content to mostly just chill out in the same space. 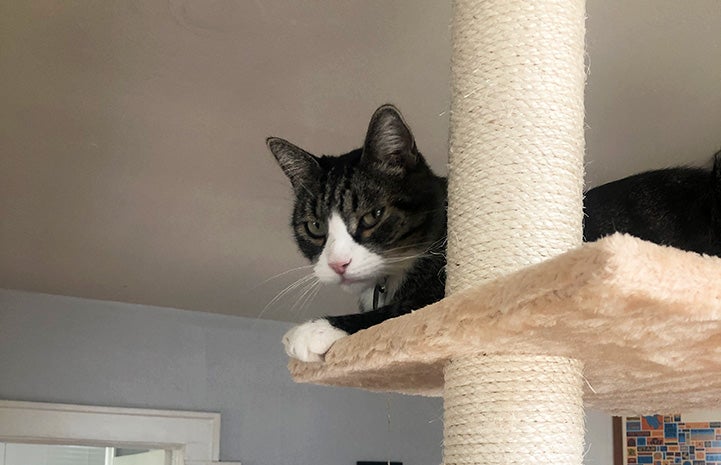 For inside exercise, Sam got Tigger a wand toy that he absolutely adores. “It’s great. He goes crazy for that thing,” Sam says. “When it’s out, he’s pretty high-energy and he’s very quick and can definitely catch it like a bird.”

Another way Tigger burns off excess energy is a little less fun, but certainly relatable to anyone who’s ever had a playful cat around: “He sleeps on my bed,” says Sam, “and any time there’s a rustle in the sheet or the blanket, he’s 100% sure it’s a mouse running around. So, when there’s any little wave of the sheet, he attacks and bites it, and it’s usually toes.

“Fortunately,” he continues with a laugh, “my sheets are old and I don’t really care about them because they’re full of holes now.”

As for Tigger’s adventurous side, Sam says they get outside usually more than once a day. “We’ve gotten into a good rhythm just hanging out on the front porch,” he says. “I’ll take him out on the leash and harness and attempt to walk him every once in a while. He does OK, but he’ll walk for 10 feet and then stop and eat some grass or lie down.”

It sounds like the little adventurer has decided it’s time to settle down now that he’s got a nice home and a person of his own. “If I go to the front door,” says Sam, “he’ll always come over to try and get out, but he doesn’t really dart and try to run outside. He’s just kind of curious and slowly steps out.”

With a balance of long naps, games of chasing toys or blanketed feet and plenty of opportunities to just spend time outside where he’s always wanted to be, Tigger’s really found his place. And he doesn’t seem very keen on leaving it ever again. 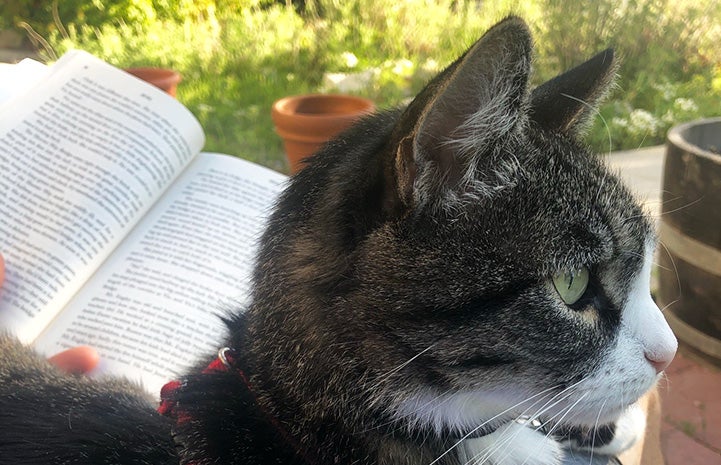 Settle down with a pet

Homeless pets all across the country are looking for the right place to settle down. Could it be with you?

Work-life purrspective from a barn cat

Hot off the keyboard: When cats type

Photos by Molly Wald and courtesy of Sam DeMastrie