Image
Southeast found himself stuck on a cliff, but help was soon on the way for him and his lost sister.
By Sarah Thornton Photos by Molly Wald, Megan Boemeke and Matt Fisher

Southeast was not having a good week. His family had moved, leaving the young dog and his canine sister behind to fend for themselves. Luckily, local animal control in Utah was alerted to their plight, picked them up and held onto them. They had been spayed, neutered and had collars, but no microchips or tags. And no one showed up to claim them.

It didn’t take long, however, until Southeast proved himself to be an adept escape artist. He scaled the fence, ran off, was caught and brought back, only to then dig out again a couple days later after the staff’s evening check. A storm was rolling in as both dogs left their run and slipped away into the darkness.

Sometime during the night, Southeast found himself stuck on a cliff with no easy way down. And that’s where he was, still, when two staff members from nearby Best Friends Animal Sanctuary responded to a call from the concerned woman who spotted him. 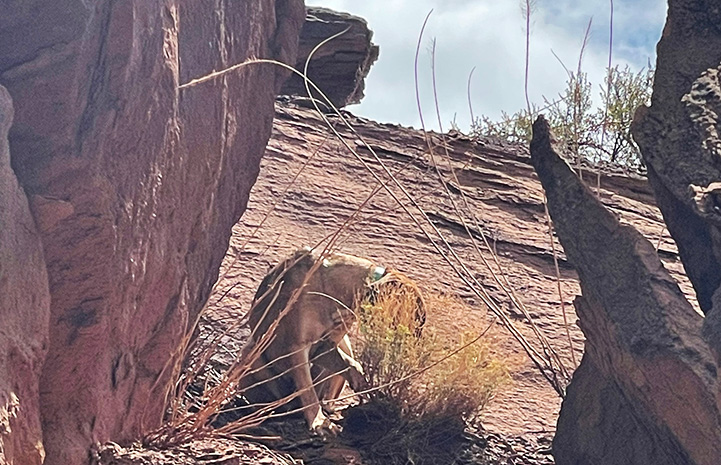 It was Tierney Sain and Megan Boemeke’s day off, but what better way to spend it than helping a dog out of a tight spot? They headed down dirt road after dirt road for miles until they finally reached the spot where the woman was waiting to direct them.

“He was still in the exact same spot,” Tierney says. “I think he got into that crevice one way and didn’t know how to get back out, so he just stayed there. I think he was there for that whole storm we had that night and morning, too.”

With Megan and her dog waiting at the bottom of the cliff (in case he tried to head that way), Tierney scaled the incline and approached from the side. The only path to the dog was to go up and around, at one point crawling on hands and knees to squeeze underneath a rock. From his footprints in the drying mud, she could tell it was the same way he’d gone in. 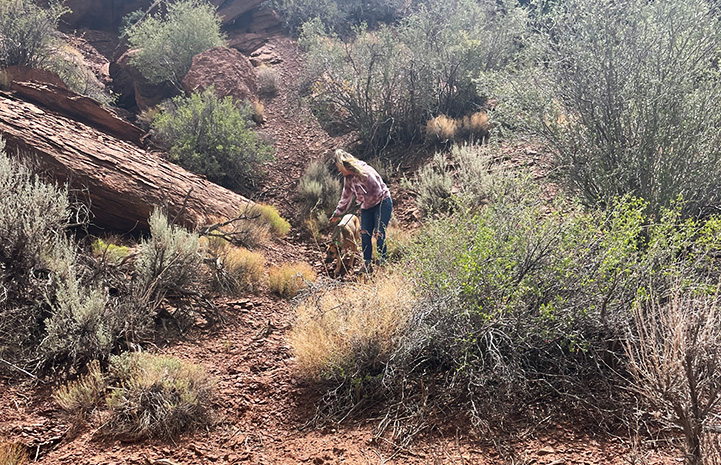 Making sure she didn’t startle the already-frazzled dog, Tierney tried tossing him some treats, but he was too terrified to eat them. He didn’t look like he was going to run, though, and he didn’t put up any resistance when she slipped a lead over his head.

“He was nervous of me at first, but got over it pretty quickly,” says Tierney. “It was kind of a feat to get back down, the two of us, because it was a little slippery and climbing through the rocks together was a little sketchy. But he followed me back down.”

Southeast hopped right into the car without a fuss. 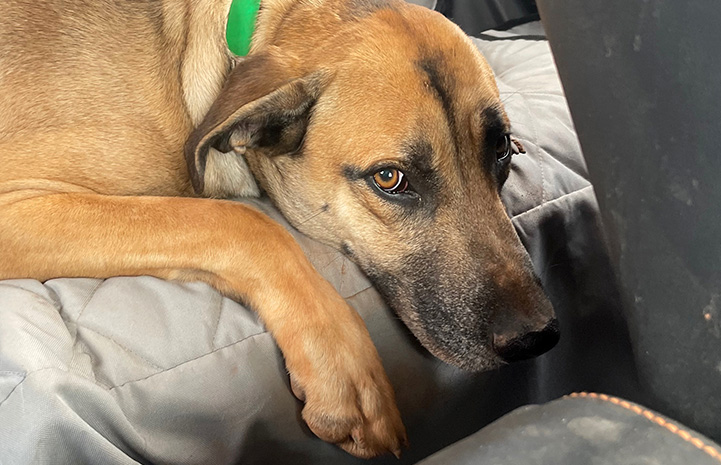 Tierney and Megan immediately made calls to dispatch and animal control, and learned he was still on a mandatory stray hold. But because he was so good at escaping, it was agreed that he could finish out the hold at the Sanctuary, where he would be in a more escape-proof yard.

Once he was safe at the Sanctuary, the veterinary staff examined him and found lots of minor scrapes from his adventure, but otherwise gave him a clean bill of health. Caregivers offered him food and water, a little bit at a time to prevent him from overdoing it.

Megan recalls that he seemed pretty happy: “(He) slept for a day and a half after he got here. He was pretty far from where he’d first run away, so he had covered a lot of ground.”

Southeast’s stray hold ended with no word from his previous family, so he was officially welcomed to the Sanctuary to stay until he could be placed into a new home. He was given the name Southeast because of where he was found (south of the Sanctuary and east of town), and caregivers nicknamed him “Southie,” a name he quickly responded to.

Recovered from his perilous adventure, Southeast put his personality and energy on full display. He was so excited to be around people that he started jumping and grabbing at their clothes. He’s especially rambunctious when it’s time to put on his harness for a walk, but as soon as he’s out of his yard with new human friends, the big dog is a big baby.

He leans hard against their legs and sticks as close as possible as they wind through the canyon trails. “He’s a sweetheart,” Megan says. “He bonds with people really quickly. If he thinks you’re his person, he just wants to be with you all the time.” 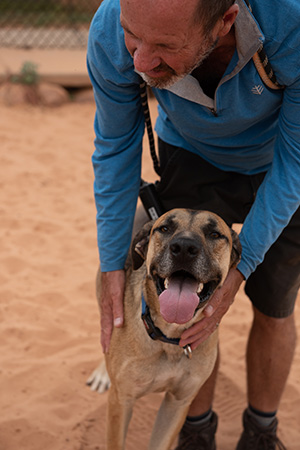 Right now, one of Southeast’s favorite people is caregiver Matt Fisher. At the Sanctuary dog park with Matt, he’s like an orbiting satellite, never wandering too far from his friend. They’ve been working on his recall, calling him excitedly from one caregiver to another in order to reinforce his natural desire to stick close to his people. That way, if he slips out again in the future, he’ll come running right back.

“He’s really sweet,” says Matt, “He’s a moosh. On a nice couch, I think he’d take the corner and let you sit right next to him and pet him.” Nicole Srulowitz, another of Southeast’s caregivers agrees: “I think he’d be really cuddly … he’d be either the big or little spoon.”

During his time at the Sanctuary, Southeast hasn’t shown any signs of trying to dig under or jump over the fence. He’s happy just spending time with his human friends. He even goes on group dog walks, where he seems very interested in meeting the other dogs. But through no fault of his own, introductions with potential new canine companions didn’t work out, so the friendly young dog remained without a roommate — at least until a month after he arrived, when a familiar face finally joined him.

While Southeast enjoyed his time at the Sanctuary, his sister remained missing. Police Chief Tom Cram left food for her and saw that it was being eaten. But he couldn’t confirm whether or not it was actually the same young black Lab who sneaked out with Southeast that stormy night.

Megan and Tierney teamed up with Chief Cram by setting up a trail camera near the food to see if, indeed, the mysterious canine diner was actually Southeast’s missing sister. Lo and behold, they managed to catch her dark, fuzzy rear end on camera as she sneaked back to fill her belly. Once they knew she was sticking around, they set out a humane trap, and by the end of the weekend, sis was headed to the Sanctuary. 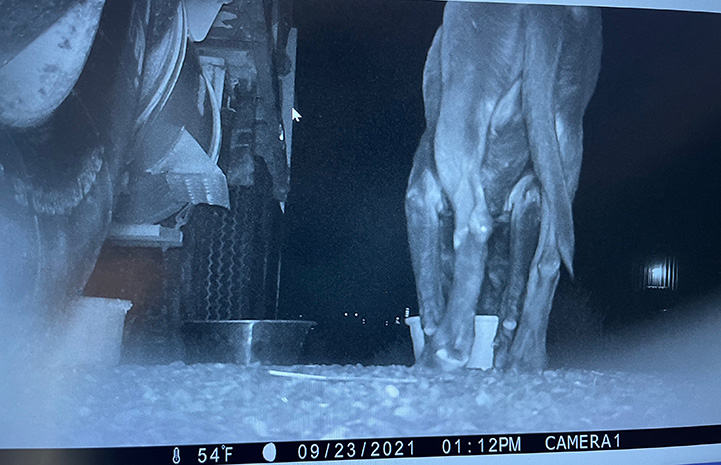 [Epic hikes with dogs in Utah]

Covered in cactus spines, the dog was otherwise in good shape, since she had plenty of access to food water during her month-long outing. To complement Southeast, the staff named her Northwest. And though she was scared when she first arrived at the Sanctuary, the moment she saw her brother again, she whined and pulled on her leash to get to him. 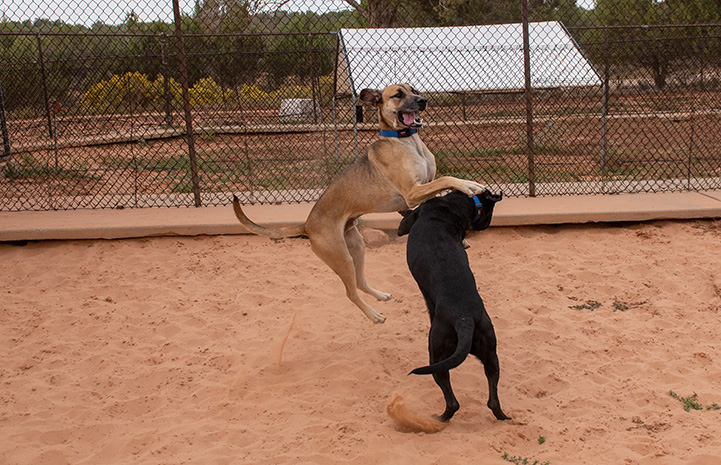 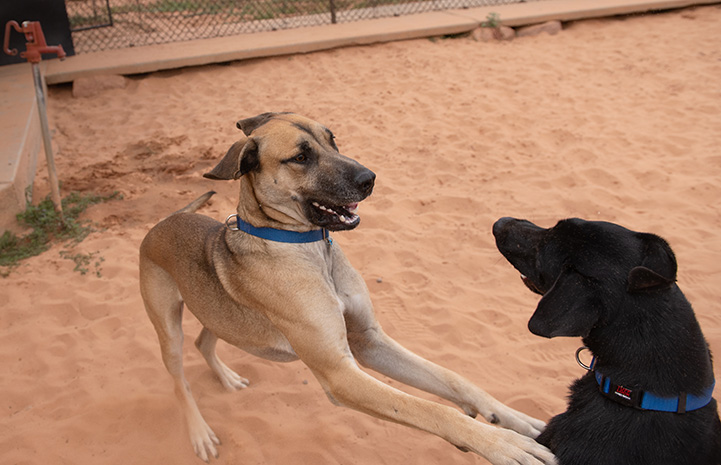 As soon as they were together, they played like they’d never been apart. There was no hesitation. Tails wagging, they immediately pounced and rolled around in the sand.

The big, sweet dogs have been through a lot, and now they’re finally safe. They’ll have everything they need to embark on their next big adventure: getting adopted.

Homeless dogs across the country are looking for someone to love. Could that someone be you?

8 tips for adopting a dog

Dachshund trades traumatic past for the good life