Family held out hope for years to adopt a shy cat

Image
Family adopts a very shy cat who came from a hoarding situation. Patience is the key in helping this cautious girl.
By Christelle L. Del Prete 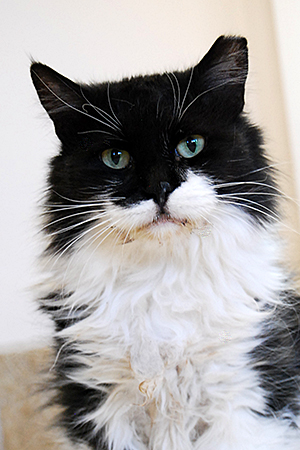 Mariah was one of those shy cats who faded into the background when visitors and potential adopters came around.

The 11-year-old cat arrived at Best Friends in the wake of the Great Kitty Rescue, a hoarding situation in Pahrump, Nevada, where hundreds of neglected cats were saved. Many of them were brought to Best Friends, and a few, including Mariah, were so afraid or introverted that it would be quite some time before they could be adopted.

But as Mariah was about to find out, there really is a home for every pet — even for a shy senior cat.

With time and patience, Mariah warmed up to Cat World caregivers over a number of years. But she remained wary and unsocial with strangers. In fact she was determined to avoid them, and that wasn’t hard to do. She’d just run off and hide in the rafters or in a cubby, and fade from view. But when the Haley family came to visit the Sanctuary, Mariah finally met her match.

Mariah might have been evasive, but she couldn’t hide forever. Once Jonel caught sight of the pretty black-and-white cat and heard the story behind her skittish behavior, she set out to do what no volunteer had been able to do before. She accepted the challenge of befriending Mariah. Allen and Shon joined in the effort.

Jonel spent most of that first visit sitting on the floor of Mariah’s room, offering her baby food. Mariah was as cautious and hesitant as always. But perhaps she recognized something in Jonel that she hadn’t seen in a stranger before: a kindred spirit in someone who wasn’t going to be discouraged in any way by her nervous cat disappearing act.

Get help with socializing a shy or fearful cat

“I’m every bit as stubborn as she is,” Jonel laughs. At first, Mariah was as skittish as ever, but progress came quickly. “By the end of that first week,” Jonel says, “she would walk up and put two paws on my leg for baby food,”

It was a huge leap of faith for Mariah, and it endeared her even more to the Haley family. They would have taken Mariah home right then if they could. But they had aging special-needs cats at home, and adding an extremely timid cat to the family didn’t seem fair to any of them. 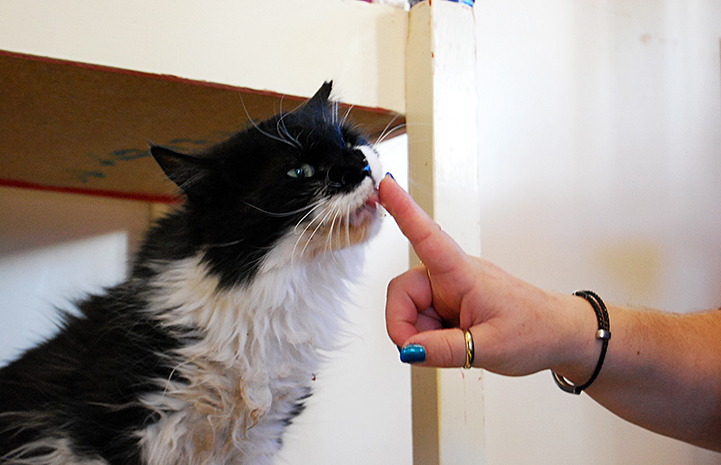 So the Haleys returned home to Maryland without Mariah. But the next year, they came back to the Sanctuary and gathered again in Mariah’s room. As she did before, Jonel sat on the floor and fed the bashful cat baby food. Mariah hadn’t forgotten their friendship, and the Haleys were thrilled to see that she remembered them. But once again, they had to leave Mariah behind when their vacation ended.

People say that the third time’s the charm, and that’s how it was for Mariah and the Haley family. In between their second and third Sanctuary visit, the Haleys lost their 11-year-old diabetic cat. Though they were missing him terribly, it meant that there was a spot in their home for another pet. No one had any doubt that it would be filled by Mariah. Finally, it was time to bring her home.

This time when they went to see their favorite kitty in Cat World, it was with happy anticipation. With her husband and son at her side, Jonel still spent hours sitting on the floor feeding baby food to Mariah, just like she always had. 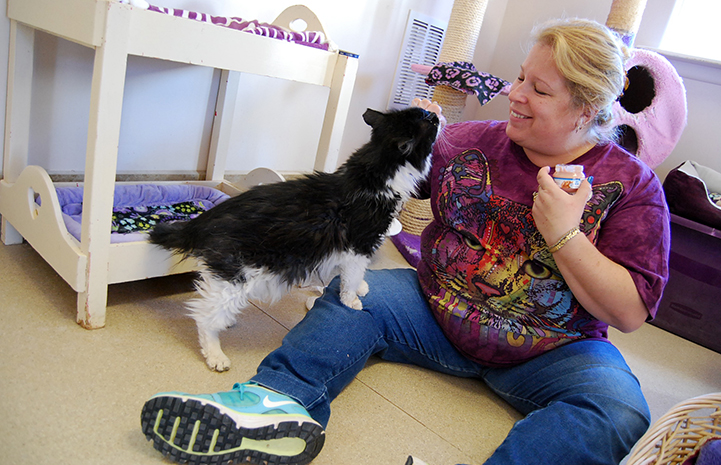 Since they are both so strong-willed, Mariah and Jonel occasionally pushed and tested each other in a playful, loving way. Sometimes, Jonel would sneak in a quick chin scratch as Mariah stretched her neck toward the baby food on Jonel’s finger, or she’d “boop” her very softly on the nose. Sometimes Mariah would walk off and duck behind a cat tree or sit on the other side of the room, watching Jonel and playing coy.

But just like the Haleys, Mariah kept coming back. Jonel says that considering where Mariah came from, her progress has been incredible. “She’s become my heart and my challenge,” Jonel says, adding that the family will never give up on her.

Soon, it was time for the Haleys to go home again, but it wasn’t long before Mariah followed. By the time she arrived at her new home, there was a separate, cozy room set up just for her. It’s quiet and has lots of hidey-holes that Mariah can crawl into when she wants to feel extra safe.

How patience is key with a scared cat

Since Mariah still needs her space and the family is often busy during the day, family members take turns sleeping in Mariah’s room at night. Just recently, she’s started jumping up and sleeping on the bed with the family member who’s there.

Besides those stolen chin scratches, Jonel has been able to get in lots of cheek rubs and some pets on Mariah’s back. But although Jonel may have initiated the family’s friendship with Mariah and often is the one to nudge it to the next level, she stresses that it’s been a family team effort. “We all walk around smelling like baby food,” she says.

While Mariah loves her baby food, she isn’t sure she likes the hands-on attention yet. But as Allen says, “It's only a matter of being patient with her.” Because she’s already gone from a cat used to disappearing when new people are around to one who has accepted three friendly strangers as her new family.

Donate to Save Them All™
Photos courtesy of the Haley family​