Wayne VanPatten, his wife, Ellen, and daughter, Laura, are a family of animal lovers. However, by volunteering at Best Friends Animal Sanctuary, they’ve discovered a whole new extended family.

Roughly 20 years ago, when Wayne and Ellen were visiting some of the national parks around Kanab, Utah, they saw Best Friends mentioned in their travel guide. Intrigued, they stopped in for a tour and became members.

However, it wasn’t until Wayne’s 60th birthday, seven years ago, that they started visiting and volunteering regularly. In fact, they’ve been back at least once every year since.

It’s not surprising that they initially felt such kinship at the Sanctuary, since they volunteer locally for Linda Ann Greyhound Rescue in Allentown, Pennsylvania. 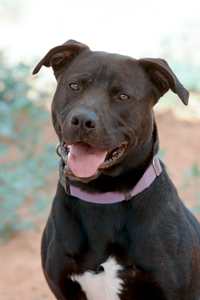 Sometimes, when their schedules allow, daughter Laura joins them for family volunteer vacations, which is what happened recently. They decided to volunteer almost exclusively in Dogtown, after they hit it off so well with one of the caregivers.

Their group worked primarily in two areas of Dogtown, where some of the dogs need extra attention and training beyond what’s normally provided. And their family got a little extra attention as well when they received lessons in clicker training, which rewards dogs for positive behavior. Any time a dog does something positive, the volunteers depress a clicker (a small device that’s easy to hold in the palm of a trainer’s hand) and then give the dog a treat. It helps dogs know exactly what they did that was great, and also reminds them what people want to see more of. Sometimes it’s as simple as having a particularly shy dog look you in the eye, or for a dog who has progressed beyond such a basic skill, something a little more complex.

Piston, an American Staffordshire bull terrier, already knew the ropes of clicker training. The VanPattens’ assignment was to click and treat every time Piston sat down. It was as though he was training them and began sitting, even when he wasn’t prompted.

Laura recalls, “He would just sit automatically and look at your hand like, ‘OK, I did it. Where is it?’”

Small victories for a hound dog 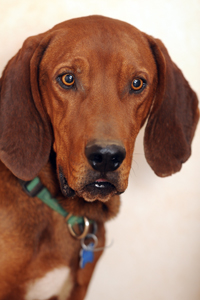 Even the small victories are extremely rewarding and reaffirming. Owen the hound dog needs help building up his confidence. The VanPattens remembered Owen from their last visit, when he was extremely shy and couldn’t even make eye contact. Though he’s still shy, during their recent visit Owen went on walks and engaged with them for the first time.

“He was starting to act like a real dog and he was enjoying the path and the surroundings,” says Wayne.

It’s not just the animals and beautiful scenery that bring Wayne, Ellen and Laura back again and again. They’ve developed close friendships with staff, who always make them feel part of the Best Friends family.

“The people all seem to recognize us, every time we come back,” says Ellen. “It’s so heartwarming that people care. All are the same with their love for the animals and wanting what’s best for them. It just makes you feel so good when you’re there.”

Of course, the mutual mindset to Save Them All bonds them in a special way they can’t find elsewhere.

“It doesn’t matter if you’re in the gift shop or who you’re talking to. Everybody has the same objective and that’s the wellness of the animals,” says Wayne. “It’s totally rewarding.” Ellen adds, “We feel welcome all the time. It’s like family.”