When Kenneth arrived at the Sanctuary, everyone thought he’d settle in and make friends with the other cats quickly. Though he was a bit unsure about people, he was used to being around, and getting along with, other cats. But when he was introduced to his new roommates, instead of becoming best buddies with them, Kenneth crawled into a cat cubby and refused to come out. He peered fearfully out into the room while keeping his head tucked in like a turtle in a shell. Caregivers took one look at that and went into troubleshooting mode to figure out what was scaring Kenneth and what they needed to do to make him his happy self again. 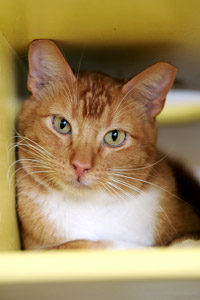 Before Kenneth came to Best Friends, he’d been living outdoors on his own, without much interaction with people. Before introducing him to other cats at the Sanctuary, he went home with a Best Friends staffer so he could begin building a trusting relationship. Over time, he no longer felt the need to flee to the rafters to escape human contact – especially when they were there to feed him. By the time Kenneth arrived at the Sanctuary, he’d lived around people long enough to know they were friends, not foes. And as it turns out, when Kenneth relegated himself to hiding, he wasn’t afraid of the people in the room. Instead, he was trying to escape what millions of people have faced at least once in their lifetimes: a bully. Or, rather, three bullies.

Every time Kenneth tried to emerge cautiously from his cubbyhole, three other cats zoned right in on him. No matter where they were in the room, they would band together, sprint over to him, and chase him right back inside. It was a game to them, but very stressful for poor Kenneth, who retreated immediately and without a fight. He’s just a peaceful kind of guy.

Clearly Kenneth’s roommates just weren’t a good match for him – which happens all the time with animals who, just like people, are great friends with some, while not so fond of others. Sometimes it takes a few tries to match up animals so everyone’s happy, and luckily for Kenneth, the cats next door were a mellower bunch. He moved over and fit right in. 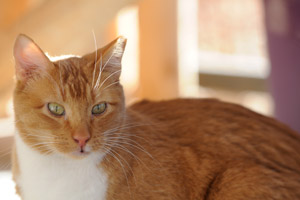 Once he didn’t have to fear being chased anymore, Kenneth started to make more human friends too. When he first met intern Alana Dingley, he didn’t care to approach her on his own, though he allowed her to come over and pet his orange coat for a while before he moved away. By the end of Alana’s week in Cat World, Kenneth couldn’t get enough love from her.

The effects were lasting. Kenneth now runs right up to his caregivers, rolling over for pets and belly rubs. And he doesn’t mind snagging a snuggle or two. He likes to cuddle up and rub his face against people’s chests. He’s making feline friends too. Sometimes he’ll sleep cuddled up so tightly with four or five of his friends that they look like a patchwork quilt of cats.

Kenneth has come a long way from living on his own, fearful of people, and now that he has other cats to love too, he’s truly got it made.

Get more information about Kenneth, or any of the other adoptable cats at the Sanctuary.