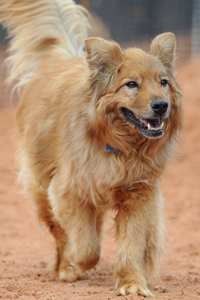 Finding a forever home might seem like a quick and easy thing for dogs at the Sanctuary. But while some are ready to go to a new home almost immediately, others require a little (or even a lot) more preparation before they take that all-important next step. Rogue is proof that finding the perfect home can happen for any dog — and that no matter how long it takes, it's worth the wait.

When he was younger, Rogue didn’t make friends easily. He didn’t know how to communicate what he was thinking through his body language. He seemed almost indifferent to his caregivers, because he didn't wag his tail or get really excited to see them. And, whenever he encountered a stranger, he would automatically run away.

But over time Rogue started showing signs of being more open to people. Perhaps it was a combination of his mellowing with age and his caregivers’ efforts to help him feel comfortable and relaxed around people. He eased up a bit, and adapted more quickly to new situations. As he was finally able to start embracing affection and showing it in return, his connection with his caregivers deepened.

That’s when Dogtown caregivers redoubled their efforts to help him progress from being a dog who wears a red collar (signifying that he is only comfortable being handled by Best Friends staff members) to wearing a purple collar, which means that volunteers 18 and older could interact with him, too.

By that time, Rogue had been at the Sanctuary for 12 years, but his caregivers, who’d always believed in him, knew that his recent victories indicated he was finally ready to go home. It wouldn’t be long before a wonderful person fell in love with him.

That person turned out to be Teresa Zimmerman. A longtime Best Friends supporter, Teresa had previously adopted another long-term, senior Sanctuary dog. Like Rogue, Cinderella was 14 at the time, and a bit awkward and shy around people. After a few months in Teresa’s loving home, Cinderella passed away peacefully, and Teresa was ready to bring someone else special into her life.

This time, Teresa thought she would go with a young dog. She chose Talina, a young hound who’d only been at the Sanctuary for a few months. But Talina was frightened of people and relied on other dogs for support and companionship, so Teresa had to choose a suitable companion for her. Out of all the adoptable dogs at the Sanctuary, she chose Rogue. Finally, his day had come. 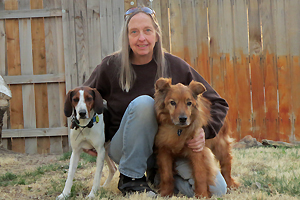 Rogue and Talina (now renamed Canoni) have since become excellent friends. They play and run around outside together and go for walks on a tandem leash. They also give each other much-needed canine companionship and support. Although both are still adjusting to their new home, Teresa says, “I like the shy ones — the ones I have to work with to get them to trust me. And I’m so happy to give these dogs a chance.”

For Rogue, that sometimes means taking things literally one step at a time. After conquering his fear of going up stairs, Rogue was too frightened to go back down. Teresa gently reminded Rogue that, like his long journey to her home, he didn't have to do things in one giant leap. “I taught him to come down slowly, one step at a time,” she says.

Rogue may have taken tiny steps like this his entire life. But, at long last, he’s landed exactly where he wants and needs to be — in his perfect home.

Photos by Best Friends staff and courtesy of Teresa Zimmerman