Image
Gregory the parrot started plucking his feathers due to anxiety and boredom. He may have few feathers, but this bird has lots personality and charm.
By Christelle L. Del Prete

Putting aside any parrot behavior problems, it’s nearly impossible to resist Gregory’s charming personality. The friendly and outgoing Congo African grey parrot will whistle at you when you walk into the room. He’ll woo visitors with kissing noises and whisper his own name, too — just in case you could possibly forget it.

Gregory’s a sweet and happy guy. And, at Best Friends, he’s getting everything he needs to get into tiptop shape. But there is something that makes him slightly different from most of the other African greys at the Parrot Garden. Looking just at Gregory’s gorgeous “mane” of dove-grey head feathers, it’s hard to tell that he’s a feather picker. But down below his neck, almost every other part of Gregory’s body is practically naked. 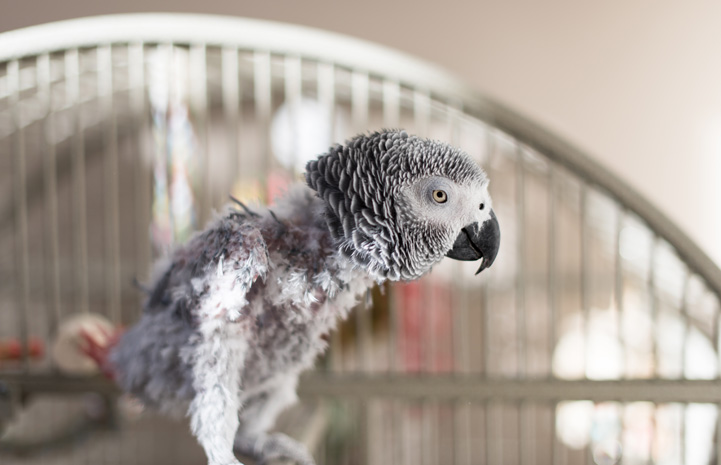 Plucked feathers result of past boredom and anxiety

All of the long grey feathers are missing from his wings, and there is only the slightest trace of his fiery-orange tail feathers. Without them, Gregory will never look fully “dressed,” since only tiny patches of white fuzzy under-feathers cover his delicate pink skin. And, because his feather follicles are permanently damaged, poor Gregory probably couldn’t grow out all his feathers at this point. Even if he stopped picking and really tried.

The plucked feathers are a result of an anxiety disorder Gregory has battled his whole life. As a Congo African grey parrot, he’s particularly sensitive and prone to stress. In the wild, explains Parrot Garden manager Jacque Johnson, “These parrots are often found in flocks of two to three hundred.” In captivity, without their flock, many African greys live in a heightened state of anxiety.

But, even without feathers to steady him, Gregory is still graceful. He’s also blossoming now that he’s getting everything he needs to be healthy and stress-free. It took hardly any time at all for Gregory to get comfortable with his caregivers and to turn into one of the Parrot Garden’s most social chatterboxes. By being super talkative and engaged with people, Gregory easily takes center stage.

Congo African greys have the intelligence level of a two- to five-year-old child, and Gregory loves to show off how smart he is. He relishes being the center of attention at the Parrot Garden, perhaps making up for lost time, since for years before he came to the Sanctuary, he didn’t get a lot of the interaction he craves.

While that may have made his plucking worse, it seems to be a lifelong habit for Gregory. No matter what the cause is, once the behavior starts, it’s pretty hard to stop. Because of it, the 11-year-old bird can’t fly, he gets cold more quickly than his fully feathered friends, and he has some trouble with balance. Parrot Garden caregivers have turned the heat up in his room and lined the bottom of his cage and the area around it with soft towels, in case he should fall off his perch. And Gregory is thriving now in his comfy area, with plenty of activity going on around him all day. 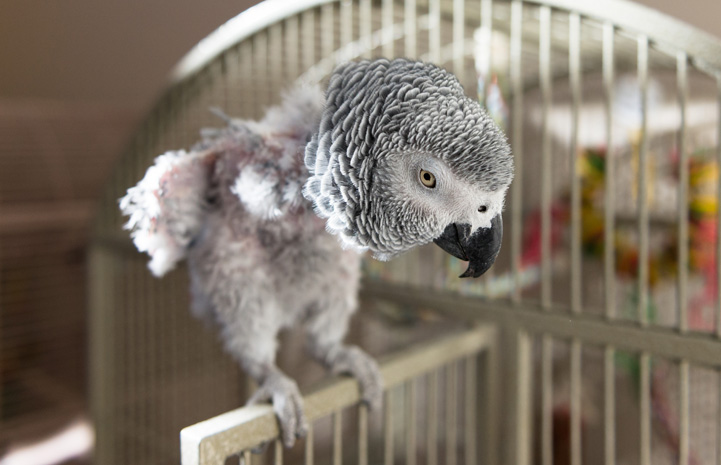 “He has lots of personality, and it's hard not to fall in love with him,” his caregivers say. Using his fantastic vocabulary skills, he’ll tell you all about his day (or his evening). He’ll also throw in some silliness and bark like a dog or call “Here, kitty kitty,” even though there are no feline friends in the Parrot Garden. When he’s feeling affectionate, Gregory will beg for head scratches or give his caregivers kisses with his beak.

Even though his unfortunate condition may never be cured, Gregory can live a perfectly happy life. Besides proper care and socialization, he just needs a chance to be himself and show the world who Gregory the grey is. And it’s safe to say that a few missing feathers won’t stop him from doing exactly that. 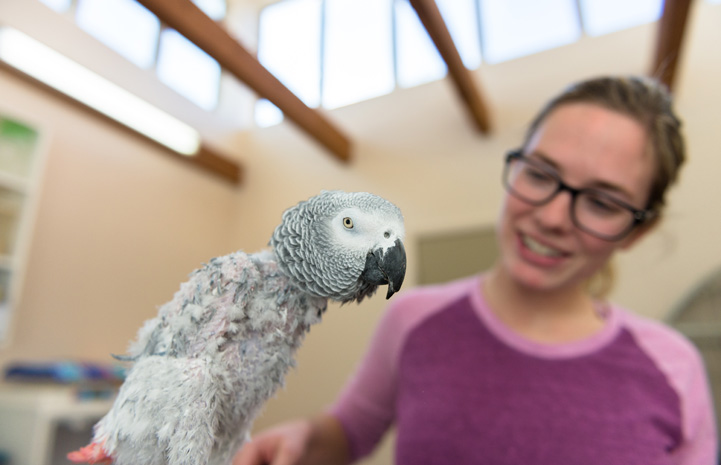 Help more birds like Gregory the grey. Here’s how: