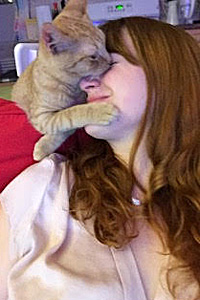 Pooh Bear’s natural tendency is to walk in circles to the left. He also occasionally plows face-first into his water bowl and sometimes tosses around his kitty kibble while eating. But recently, he’s been walking in circles around his adopted family’s hearts — just in time for the holidays.

As a young kitten, Pooh Bear ended up at Animal Care Centers of NYC (ACC), where staff thought that his unusual movements were probably due to a neurological condition. When staff from Best Friends–New York (which takes in dogs and cats from ACC) noticed the sweet orange kitten, they committed to finding him a great home — wobbles and all.

A vet check revealed that Pooh Bear is perfectly healthy. It’s likely he suffered a brain injury when he was very young or his brain didn’t develop quite right. Either way, the neurological symptoms are apparent in only some of his movements.

If you could ask Pooh Bear about the different way he moves around, he might say there’s nothing unusual about any of it. He may have a neurological disorder, but it doesn’t slow him down one bit. In fact, he dives into kitten games (such as batting toys and wrestling) with sheer joy, like any other kitten.

The next step would be for a prospective new family to see that, so Pooh Bear would be adopted and have a home of his own.

Looking past a kitten's differences

Best Friends staff and volunteers brought Pooh Bear to adoption events around New York, telling everyone that he’s a pretty typical, adorable, slightly mischievous kitten. Even so, when they looked at Pooh Bear, potential adopters only saw a mixed-up kitty. But one person saw things differently.

Sophia Beijer, a Best Friends volunteer in New York who helps out at adoption events, was introducing potential adopters to Pooh Bear. That was the fun part, because there’s no denying Pooh Bear is a perfect example of cuteness overload. If looks could melt, this orange tabby with soft fur and little pink-padded feet would reduce everyone to puddles.

But, Sophia says, when people learned that Pooh Bear has special needs, they ended up choosing other kittens instead of him. “It broke my heart,” she says.

Special in so many ways

While other kittens went home with new families, Pooh Bear just kept amusing himself with nearby toys. Sophia felt sorry for the little one and picked him up for some cuddle time. That’s when things took a turn for Pooh Bear.

Sophia says, “He pushed his little nose against my chest and he was pawing at my hair, just trying to get closer. It was so clear that all he wanted in this world was love.”

After two full weeks of “Pooh Bear on the brain,” Sophia and her boyfriend, Tim, decided they’d like to give him exactly what he wanted — love. There was just one more hurdle before she could make things official. 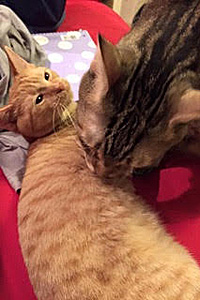 A new big brother for a kitten

Since Pooh Bear had never lived in a home or had feline friends, no one could predict how he would get along with the couple’s current cat, Meatball.

“I was scared Meatball might bully him since he is special, but Pooh Bear is so tough,” says Sophia. “He wrestles with him all the time and insists on eating out of the same bowl as he does.” Meatball even bathes his new little buddy.

Creating harmony between the new brothers wasn’t the couple’s only concern about life with a special-needs kitten. The other stuff, they simply had to learn as they went along.

Life with a neurological kitten

“We just had to adjust to him,” says Sophia, who explains that meal time was notoriously messy. They exchanged the old water bowl for one with higher edges to keep Pooh Bear from nose-diving into it. They then placed it far enough from the food bowl so that he couldn’t tip over one bowl while reaching for the other. With a few strategically arranged placemats and some experimenting, messes are a thing of the past.

According to Sophia, life with a special-needs animal isn’t all that different from any other pet — not in the most important ways, anyway. Though Pooh Bear may have a quirky walk, he’s just as loving as every other pet. She says that even if adopting Pooh Bear wasn’t the easiest decision, it ended up being the best decision.

Sophia says, “When I come home, I sit down on the couch and Pooh Bear jumps up in my lap, pushing his nose against mine, and I know we made the right choice.”