Feral cat gets help and safe haven at Best Friends

Image
Former feral cat who had experienced her fair share of hardship - difficult pregnancy, injuries, poisoning - gets TLC and respite at the Sanctuary.
By Christelle L. Del Prete

Maia, a gray tabby cat, looks serene and peaceful as she sleeps in her usual spot - curled up in a chair in the lobby of Benton's House, a building in Cat World. But her former life wasn't nearly so tranquil. In fact, at one point, she might rightly have been called the "calamity cat."

Maia was a community cat (stray cat) who kept finding herself in serious trouble. Luckily, the community she lived in happened to be within driving distance of the Sanctuary, and her caregiver was able to take her to the Best Friends clinic each time she needed help.

Stray cat with a lot of struggles 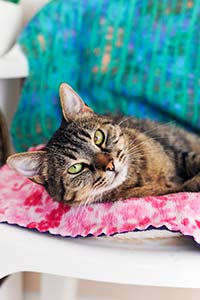 The first time Maia came to the Best Friends clinic, she was experiencing a difficult pregnancy. The second time, she had injuries to her foot and leg due to getting caught in a fan belt. The third time she wound up in the clinic, it was for a case of suspected poisoning. This time, she would stay at the Sanctuary for her own safety.

Once the veterinary team got her stabilized, and she began to recover, they realized she had some pretty serious dietary issues. She wasn't getting the proper nutrition, because she would only eat people food. Despite her rough run of luck, it was clear that someone had loved her and had "spoiled" her by feeding her things like roast chicken and macaroni and cheese. And these were the foods she expected when she arrived in Cat World.

Cat with a discerning palate

At first, her caregivers were accommodating; after all, she was underweight, almost anorexic, and needed to plump up a bit. But gradually - and much to Maia's dismay - they started transitioning her to cat food, which is much healthier for her. Now, "she'll eat cat food at her discretion," says her caregiver Teresa Abrams.

But despite her discerning palate, and the pain she endured in the past, Maia's caregivers say she is a very sweet cat who gives head butts for attention and to show affection. When up on a counter or a table, she will often reach out her paw and try to "hook" someone, so she can get some love.

She gets along with the other cats in Benton's House, too, though she's a bit of a diva. She is second in the pecking order only to Miss Dot (otherwise known as "Dot the Cop" for the way she keeps all the other cats in line). Perhaps the hard knocks Maia has had in life have made her a little tough, or maybe she's just feeling a lot more confident now that she's safe and sound.

Get involved to help cats

Get more information on Maia and the other adoptable cats at the Sanctuary. Click here.