Image
Cindy Anderson fell right away for Ori, a cat with Manx syndrome, but it took time, patience and the stars aligning before she could finally take him home.
By Sarah Thornton 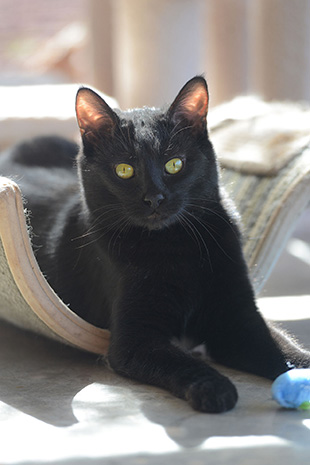 When Cindy Anderson met a sweet black cat with a funny walk named Ori, she fell in love. Volunteering regularly at Best Friends Animal Sanctuary, she spent countless hours taking him out for harness walks, petting him and giving him lots of kisses on the top of his fuzzy little head. He was a bright spot in her day every time she visited him, and Ori was always excited to see her so they could go off on another of their adventures.

It didn’t matter to Cindy that Ori was incontinent — that he couldn’t use the litterbox by himself. In fact, it made her want to adopt this very special cat even more.

Falling in love with some very special cats

Cindy’s introduction to cats with special medical needs started 10 years ago with another cat she adopted from Best Friends. Bubba Lu’s back end was paralyzed and he’d lost both back legs after being hit by a car. And though he learned to get around well with just his front legs, he needed humans to help him go to the bathroom.

When Cindy saw him on the Best Friends website, she knew she wanted to help. She made a trip to the Sanctuary, where caregivers showed her how to empty (or express) his bladder by holding him and gently placing her hand on his abdomen until she could feel it, and carefully squeezing.

“He was my introduction to pets with special needs,” Cindy says. And she was hooked.

After adopting Bubba Lu, Cindy and her husband, Don, kept coming back to Best Friends to volunteer. When they retired, they moved to Kanab, Utah (near the Sanctuary), and became regular volunteers. 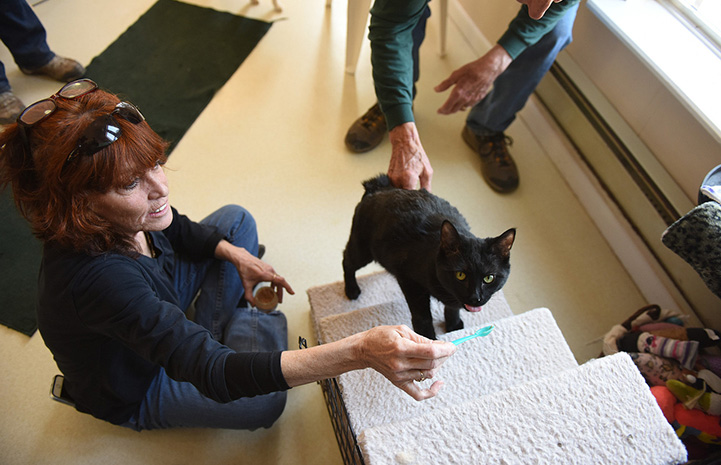 Because Cindy wanted to help cats with special medical needs, she started working with veterinary technicians and staff to provide physical therapy to Sanctuary cats. Eventually, she was asked if she’d like to learn how to administer laser therapy using a deep-penetrating cold laser to help reduce inflammation, relieve pain and aid the healing process.

Cindy took the same training course as the vet techs who normally handle laser therapy, and with their guidance she started twice-weekly sessions. Don acted as the cats’ stroller taxi, bringing each of them to and from their appointments. The couple became familiar to caregivers and, of course, the cats.

It was while they were volunteering that Cindy met Ori. She started taking him outside for walks on a harness and leash, and he worked his way into her heart.

“No matter what kind of a day I was having,” she says, “Ori always brightened my day and brought a smile to my face. He was as thrilled to see me as I was to see him and take him out for walks. I loved him and I wanted to bring him home so bad.”

Only one thing stood in the way of Cindy adopting Ori: He has Manx syndrome, a condition that gets its name from the Manx breed and occurs in tailless cats. The tailless gene causes a shortening of the spine which, in extreme cases, can lead to serious medical problems. The cat’s hind end might not fully develop, which could cause nerve damage and incontinence.

Cindy knew how to care for an incontinent cat (since she’d been taking care of Bubba Lu for years), so that by itself wasn’t a problem. But all cats are different, including when it comes expressing a bladder. And in Ori’s case, it was an especially difficult daily process that could only be done when he was very relaxed and comfortable. If he was at all tense, even experienced caregivers sometimes had to take a break and come back at a quieter time to try again.

Cindy tried her hand at it many times to see if she could safely take Ori home and care for him, but she couldn’t get the hang of it. “I was sad,” she says, “but I was volunteering often so I still got to see him, and that made me happy.”

Eventually, Cindy and Don moved again, five hours away from the Sanctuary. But sometimes things have a way of working out, and it wouldn’t be too long before Cindy got a message that changed her life, as well as Ori’s.

[Cat with Manx syndrome gives the best hugs, gets a home] 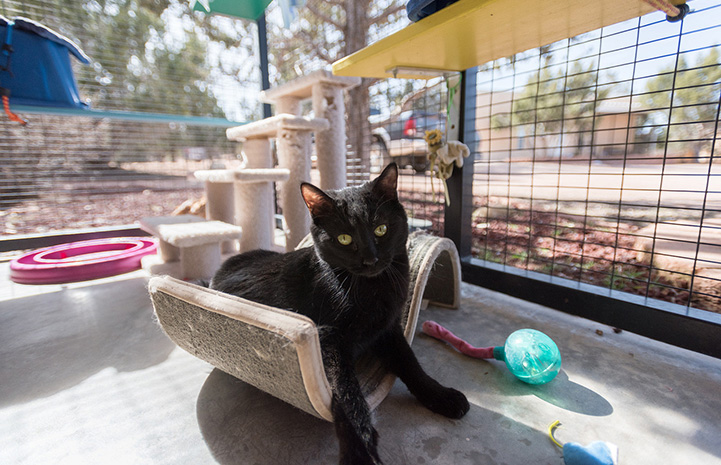 Despite the distance that prevented continued volunteering, Cindy kept in touch with Sanctuary caregivers, who sent her updates on Ori that included videos and pictures to let her know how he was doing. He still brought a smile to her face, even if she could only see him on a screen. And then, in one of those updates, she learned that with time and a new medication, Ori’s bladder had become much easier to express. Even people relatively new to the process were able to do it.

The 10-hour round trip drive was not going to stop Cindy from going to see for herself, because if she could successfully handle his daily needs, Ori was coming home with her.

“When we got there,” she says, “he came to me and I hugged him and I kissed him, and we went for a walk.”

It was time for the moment of truth. With an audience of caregivers gathered around and eager to see the results, Cindy got ready to express Ori’s bladder, but not much happened. “There was just a lot going on,” she recalls, “and Ori has to have a quiet, calm environment to be able to relax ... So, I just kind of gave up for the time being.”

On her second attempt, though, she was successful. And she was ecstatic.

Ori would be joining the family. They said their goodbyes with caregivers, who hugged Ori and wished him well in his new life, packed up the car and headed home. 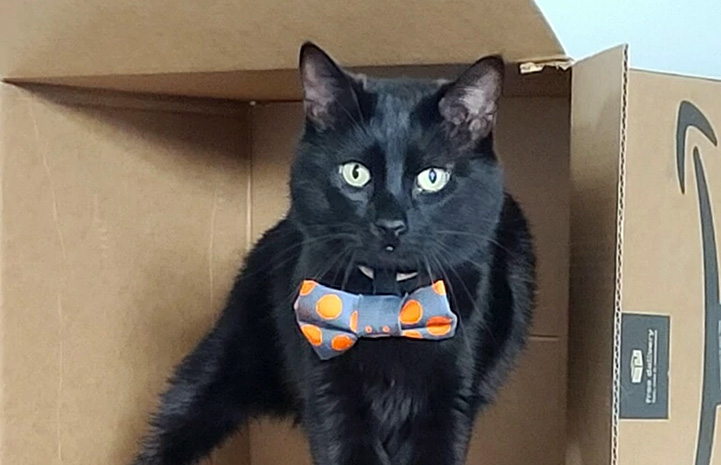 Ori settled right in by joining a household of other cats with special medical needs — from blindness to deafness to having only three legs. They’ve all been calmly welcoming toward the newcomer, and Cindy is waiting to see what future friendships might be forming. For now, Ori is content to explore the house on his own.

Cindy says he’s developed a particular fondness for the unfinished basement. “He maneuvers (the stairs) slow and awkwardly, but he does fine.” Plus, she says, it gets him some exercise and provides him with a new way to move his stiff back legs.

[Despite his special needs, this kitten was born to be happy]

After just under a month in his new home, Ori has relaxed to the point where it’s easier than ever before to express his bladder. “I have to scratch his ears and give him a back scratch to help him relax and then …” Cindy laughs as she explains how easy the process has become. “That’s what I’ve learned is the key with him.”

It’s clear in Cindy’s voice how much having Ori means to her. A cat she once thought could never be hers was well worth waiting for. “Everything is working out perfectly, and I’m happy and Ori is happy,” she says. “Ori knows he’s loved beyond words.” 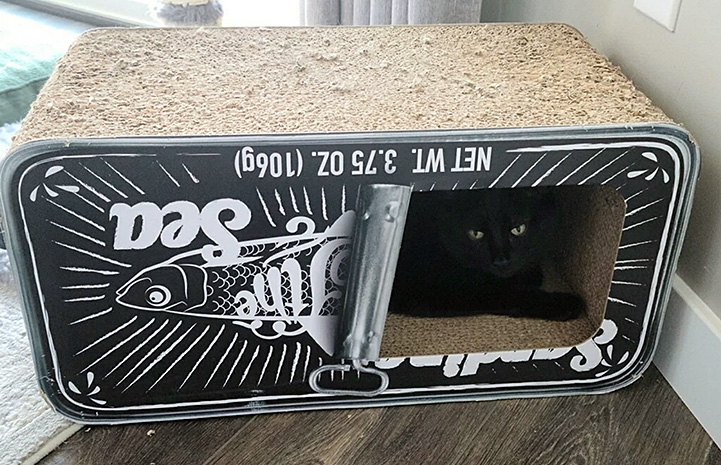 Pets put a smile on your face

There are homeless pets near you just waiting to light up your life and put a smile on your face.

Photos by Molly Wald and courtesy of Cindy Anderson