Finding courage in the eyes of Aristotle

Image
Karen Wilcox gave herself a gift for her 41st birthday - jumping out of an airplane - and she gave rescued animals something as well.
By Best Friends Animal Society

Owner of Noah’s Bark Pet Sitting in North Easton, Massachusetts, Karen made the jump (her first ever) on her 41st birthday. Skydiving was something she had always wanted to do. What better time than on her birthday? 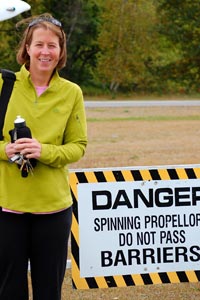 "But I didn’t want it to be all about me," she says, "and so I thought, ‘Why not raise money for my favorite animal organization?’"

Karen heard about Best Friends several years ago from a client who had visited the sanctuary and had nothing but sterling words to say about it. The client gave Karen copies of Best Friends magazine and our newsletter. Karen has been an ardent supporter ever since.

In dedicating her skydiving jump to Best Friends, Karen sent 50 letters to her clients and to local pet-oriented businesses just three weeks before her jump, informing them about Best Friends and all the fantastic work it does. Checks promptly began to appear in Karen’s mailbox.

On the night before the jump and in the hours leading up to it, Karen kept picturing the dogs she had seen on bestfriends.org. She says they were her source of inspiration, and her source of courage. 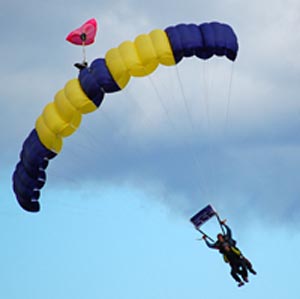 One dog, his eyes especially, stood out: a fox terrier named Aristotle.

Aristotle came to Best Friends furless and covered in painful scabs – the results of having been in a hoarding situation in Los Angeles. He entered Guardian Angel, a program at Best Friends to help special-needs animals. Karen followed the story of Aristotle on the Guardian Angel website, watching as his skin condition and his morale drastically improved until finally he was adopted.

Thanks to Aristotle, Karen says she had little fear going into her jump, even though the plane ride prior to her jump was a "bit bumpy."

Her jump went off without a hitch, and she landed safely. "The whole thing was amazing," she says. "I’m glad we did it, and I’m glad it’s done."