Finding a home is no accident

Image
It was love at first sight.
By Best Friends Animal Society
By Sally Eastwood

As soon as I saw that cute speckled nose, I was done. My heart belonged to "Oops," one of the so-called "accident puppies" Best Friends had featured on Facebook. I already have one rescue pup, adopted through petfinder.com almost five years ago. Owen is a Jack Russell terrier mix and is now around nine years old, though no one really knows for sure.

It had always crossed my mind to bring a second dog into the house. My daughter and I have volunteered at Best Friends three times in the past four years, and it's hard not to bundle up one or two dogs and bring them home. But no, I'd always felt that Owen wanted and needed his "only dog" status in the house, so that was that. 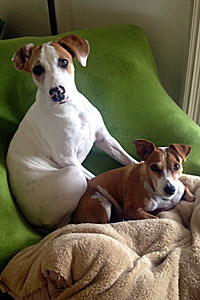 Oops was the one who changed everything. I honestly thought the adoption process would take a long time. As it turned out, I submitted the online adoption form one afternoon and the very next day had an email in my inbox basically asking, "When can you come?" Wow, that was quick!

Oops was one of five puppies in the litter and from the photos it was hard to tell how big they all were. The weight estimate helpfully said "50–100 pounds," so who knew for sure. A couple of weeks later, my 13-year-old daughter, Fiona, Owen, and I drove the eight hours from Laguna Beach, California, to Kanab to meet Oops, see how we all got along, and, if all went well, give her a new name as well as a new home.

The meeting went well. Oops was shy and Owen was standoffish, but, positions in the pack having been determined, we had a relatively quiet night in a motel in Kanab before driving home the next day. As for the car drive, we were prepared for anything: vomiting, barking, whining, fighting, you name it. As it turns out, both dogs lay side by side on the blanket in the backseat, and although they didn't actually sleep, they were calm, quiet and put up with each other's presence in a dignified manner.

No longer a puppy

It's been three months now. Oops was renamed Piper, and Piper is growing like a weed. When we adopted her, she was four months old and weighed 37 pounds. A month later, she was 43 pounds. Now, at almost seven months, she weighs in at around 57 pounds! A DNA blood test tells us that she's Australian shepherd, Weimaraner, Briard, Gordon Setter, Bulldog and German shorthaired pointer — go figure. We just call her big goofy dog because that's what she is. 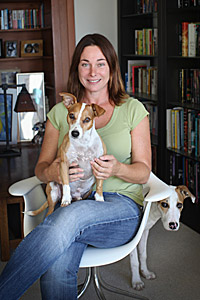 Owen and Piper have settled into a harmonious relationship: sleep and play punctuated by the occasional growl and yelp. Piper knows her place. Although she's literally over twice Owen's size, he's still dog number one in the pecking order.

As for that speckled nose, it's still speckled, although not quite as much as it used to be. The black is starting to close in on the pink. No matter, we love her just the way she is, and we're glad she's part of our family.

Rescue your next family member

There are so many wonderful dogs out there needing loving homes. Whether you visit your local shelter, a rescue group, or Best Friends, when you adopt a dog, you’re saving more than one life. By bringing one four-legged friend home, you’re freeing up space at that facility for another to come in. That dog then gets a better chance at a better life, too.

My two adopted family members are the best advertisement for rescue dogs you could meet. They win friends everywhere they go, and put smiles on faces.

What could be better than that?