Image
Five more dogs have come to the sanctuary here in Utah after their terrible trials in New Orleans.
By Best Friends Animal Society

Five more dogs have come to the sanctuary here in Utah after their terrible trials in New Orleans. Here, they’ll get the extra medical care they need. 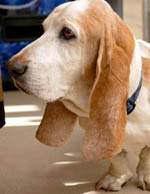 Fred is the basset no one is likely to forget. You may remember his story. His family packed up to flee the hurricane, but didn’t have enough room for all the dogs. So they left Fred behind! Later, they asked a neighbor to just drop him off at a shelter; they didn’t want him back. Thank goodness those floppy ears of his couldn’t hear that! It would’ve broken his heart. But now, he’s come to Best Friends, where it looks like he may already have an interested adopter! He’s older, and he’s covered in tumors, so he’s going to need some extra care. But he’ll get that right here at the sanctuary clinic. We’re glad to have you, Fred! You’re very, very wanted here.

Then there’s Seven, who got his name because he was rescued from the hurricane with seven broken bones! No one knows how that happened, but he’s getting repaired here at the Best Friends clinic, and he’s a good sport about it all. You’ll be able to keep up with his progress in the Guardian Angel section of this website.

The little black one is Principessa. This poor thing suffered from acid burns all over her belly from the chemicals in some of the floodwater. Now, she’s getting treatment and special care at the clinic, and is going home at night to a cozy foster home. She’s already feeling a lot better! 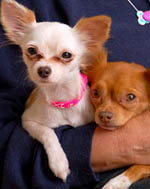 The two Chihuahuas are Mia and Lois Lane. Poor little Mia has a heart murmur, but all that snuggling helps keep her relaxed! Lois Lane was a reporter, Cathy Scott’s writing partner throughout her stay in Tylertown. Now, this gal who was once starving and covered with flea bites will be given extra special care right here in Utah.

With the exception of Fred, who was given up, all these dogs are still hoping to be reunited with their families. But in the meantime, this wonderful bunch should fit in just fine with all the quirky animals right here at Best Friends. A big welcoming hug to all!