Floyd Lampart's Pedal for Paws ride to help the animals

Image
Floyd Lampart is doing the Pedal for Paws bike ride, 12,000 miles around the outer perimeter of the country, to raise money for homeless pets.
By Denise LeBeau 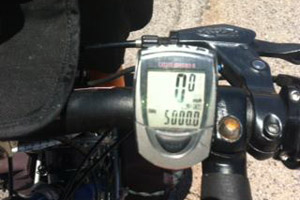 Floyd and Martha Lampart are going the distance for animals in need. Six years in the planning, the Pedal for Paws bike ride, now with over 5,000 miles on the odometer, is only about halfway completed. With the goal of riding a total of 12,000 miles around the outer perimeter of the country, Floyd is ramping up to raise more money and awareness for homeless pets.

"I've got the easy part," muses 67-year-old Floyd. He's the one riding solo on the bike. "My wife, Martha, is busy back home taking care of the family and doing all the logistics so I can stay on course. I couldn't do this without her."

Floyd and Martha are longtime Best Friends supporters, and the ride is helping, in part, to raise funds by taking public pledges for the new Best Friends clinic. The new clinic will not only be bigger but boast an in-house laboratory.

Floyd has always had a dog and remembers from a young age wishing "he could give every animal a real home." Floyd took his love of animals and brought it to the place where every animal is cherished, the sanctuary that Best Friends runs in Kanab, Utah. There he and Martha found their sweet spot, so to speak, volunteering with senior dogs at a section of Dogtown called Old Friends. 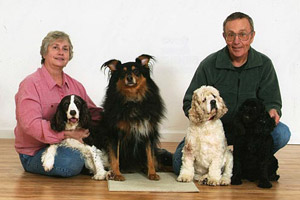 "I've got an affinity for older dogs, and Old Friends is an amazing place," shares Floyd. "We've adopted five older dogs from Best Friends, and this ride is dedicated to our last two, Chester and Marley. While they have passed over the Rainbow Bridge, they are with me every step of the way - I've got their pictures taped to my bike. When the ride gets tough, I just look to them for inspiration."

He finds the dogs and Best Friends equally inspiring: "Since the first time we were introduced to Best Friends, what you do there, how you do it … the mission statement is exactly what interested us."

The Lamparts chose to support the new clinic because senior pets often require more specialized care, and a state-of-the-art medical facility will ensure they receive it.

A journey with obstacles to help animals

While making his way around the nation, Floyd has faced one interesting obstacle he hadn't counted on: bridges. Because the route takes him through densely populated areas, he has found that when he hits a large body of water, the road that permits bicycles mergers with the interstate that does not permit bicycles, so he has to switch gears. He's had to hitchhike over three bridges in New Jersey, Alabama and North Carolina, and had to ride 35 miles out of his way when no one would help him out when he was trying to pass over a bridge from Louisiana into Texas. "I stood there for an hour and a half with a sign," says Floyd, chuckling.

While he has been able to be flexible about his path, there's something he wants others to be flexible about too - the way they look at animals in shelters. One of the goals for his fundraiser is to also get folks to give up the "old dog pound mentality" (the stigmatization of local shelters as depressing places to visit) and focus on the wonderful animals who need a home.

In Mississippi, he was interviewed for a news segment, where he explained what Pedal for Paws was all about, and in Biloxi a car made a U-turn and honked. A teenager got his dad to stop the car so he could meet the "man who is helping the animals." As Floyd was waving goodbye, he had one thought: "If I've encouraged one person to help the critters, it's all worth it."

Consider a donation to help pets in need.

Photos by Erin Tomanek and courtesy of Floyd Lampart