Former stray cat has “it” factor

Image
Cole, once an alley cat, has something special about him.
By  Christelle L. Del Prete

When Cole was found as a stray in Arizona, he showed signs of being a scrappy alley cat. He had wounds on his face, and on his left hind leg and toes, possibly from a fight or a narrow escape from danger. His street days behind him, Cole found safety at the Sanctuary, where he peacefully ruled the roost in the newly renovated Colonel’s Barracks building in Cat World. Because of his charisma, big personality, and strong presence, Cole has many adoring fans among Best Friends staff and volunteers. He has something else, too: Cole has what the judges on reality shows like “America’s Got Talent,” “The X Factor,” and “American Idol” are looking for in their contestants. He has the “it” factor. 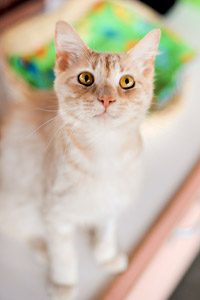 One glance reveals that Cole is a regal-looking cat, with thick gold fur and big, amber eyes. Although he is quiet, he makes it impossible not to notice him. He radiates personality and self-assurance, and he knows how to make his presence known. But rather than rubbing against people for attention, Cole, like many cats, keeps a bit of distance and will jump up on chairs and cat furniture to be sure he is seen. Once he has people’s attention, and he knows they won’t forget him, he’ll often jump up into the rafters to watch them from his lofty perch.

Cole may be an ultra-cool cat with an air of aloofness, but he actually loves – and insists upon – being around people. When he lived in one of the rooms in the Colonel’s Barracks, he would burst out into the lobby as soon as the door was opened, so he could greet his caregivers, hang out and be part of the main action. He was very persistent in this tactic, and that persistence paid off for him. In fact, it’s not quite accurate to say that the staff made Cole a lobby cat; caregiver Heather Henley says that Cole made himself a lobby cat.

Janet Wilde, another caregiver in Cat World, agrees. She refers to Cole as a “wild thing,” because he loves to play and is energetic, always moving and running around. He’s something of an entertainer, too. Recently, he leapt into an empty, clean litter box that was turned sideways and propped against a wall, and struck a dramatic pose. Larry Casale and Mike Bzdewka, Cole’s main caregivers in the Colonel’s Barracks, were unsurprised by his antics. “That’s Cole,” Larry says. “He’s quite the guy.”

But although three-and-a-half-year-old Cole can get up to some silly tricks, he also projects wisdom. “It’s like he knows a secret that we don't,” Larry says. The exact nature of that secret is anyone’s guess. The secrets of the Colonel’s most charismatic cat, like his superstar quality, remain somewhat of a mystery, but everyone agrees that Cole’s got “it.”

And now for the happiest news of all: The “it” factor cat has got himself a home for the holidays – Cole was adopted!

Get more information on adoptable cats at the Sanctuary.