Image
Once a completely unsocialized and very scared dog living on the streets, Lava learns to relax, trust people, enjoy life and even show her silly side.
By Christelle L. Del Prete

Sometimes life’s biggest breakthroughs can be revealed in the smallest movements. For a truly fearful dog, doing something perfectly ordinary for the first time — like getting leashed up, going for a walk or climbing into a car — can be the sign of a major step forward.

These wonderful aha moments happen all the time at the Sanctuary. They are the moments when dogs let go of their fear long enough to take a leap of faith and try something new. Before they can do that, they have to trust that nothing bad will happen during that first tentative, but brave move.

Lava’s aha moment came the day she played for the first time. While it looked like a spontaneous move, it had been years in the making. Lava had been living for a while with other dogs, including her outgoing roommate, Lincoln. Whenever Dogtown caregivers and volunteers stepped into the dogs’ yard to play fetch with Lincoln or offer him belly rubs, Lava was never very far away. Watching Lincoln interact with people and play with toys helped her realize that people are kind and fun to be around.

But, as anyone who’s ever tried to learn a new skill by example knows, watching someone else do something and being able to do it yourself are two very different things. For starters, trying something out in front of others for the first time requires confidence and trust — exactly what Lava was lacking. 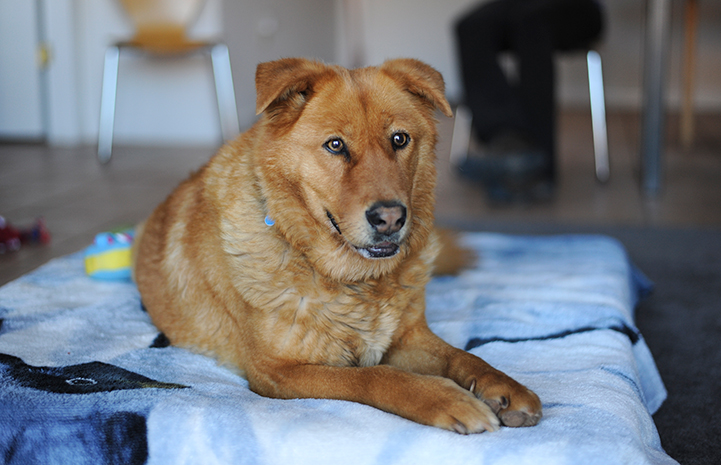 Now five-years-old, Lava was once an abandoned dog who wandered the streets of Texas until she was three years old. She lived under a shipping container, where she raised litter after litter of puppies. Time after time, she escaped the efforts of a good Samaritan and local shelter staff to catch her and get her off of the hot, dangerous streets. When she was finally brought to safety, her puppies quickly found homes through the shelter. But Lava was so frightened and unsocialized that she needed expert help.

That’s why she came to the Sanctuary, where trainers and caregivers have plenty of experience helping former street animals adjust to living with people. Since her arrival in Dogtown, Lava has been making slow but steady progress. She’s learned to trust her caregivers and to accept human touch. She will eat treats out of people’s hands. She’s learned to enjoy daily walks with volunteers, even if she’s never met them before.

With the help of a local volunteer, Lava conquered her fear of car rides and started to get out and explore the Sanctuary grounds beyond Dogtown. Those outings led to more outings, and finally to her very first sleepover.

Dog's first night in a house

When Lava first met repeat volunteers Mark and Kim Spragg, she immediately gravitated toward Mark. “I just sat quietly in her yard and didn’t look at her,” Mark says. “Then, suddenly I saw her shadow next to me, and there she was.”

Although it took a little longer for Lava to warm up to Kim, Kim felt a connection to her anyway. The couple took Lava on five outings before attempting a sleepover at one of the Best Friends cottages. “I didn't want it to be a bad experience for her, or for her to be terrified,” Kim explains.

As it turned out, the exact opposite happened. Although it may have been the first time in her entire life that Lava spent the night in a house, she wasted no time in making herself right at home. Mark and Kim set up her bed in the middle of the living room floor, and went about their evening routine — prepping dinner and watching TV while being careful not to crowd their guest of honor. 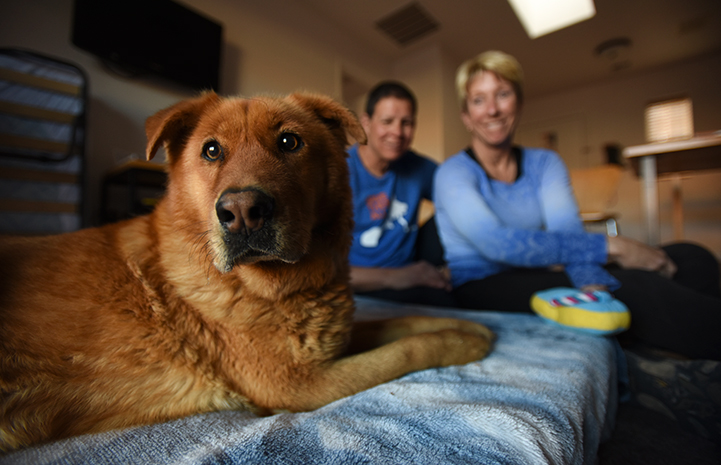 Showing her silly side

Then, while Mark and Kim were sitting on the couch, their feet just inches from Lava’s bed, it happened. The former stray dog picked a squeaky toy up in her mouth as if she wanted to figure out for herself what all the fuss was about. She shook the toy, tossed it up in the air and pawed and barked at it when it flew off the bed. “It was hard not to laugh or to say anything,” Mark says. “We were amazed. She was acting like a real dog, which was great to see."

There, in the quiet atmosphere of the cottage (away from the excitement of Dogtown) with a soft-spoken couple who respected her need for space, Lava had her aha moment. For the rest of that evening, she played in spurts that lasted several minutes. When Mark and Kim took her back to Dogtown the next day, they knew her fun was just beginning.

The next time Mark and Kim took Lava on a sleepover, she started playing almost immediately. That simple movement — leaning forward to grab a stuffed toy and shaking it a few times before tossing it up into the air — was a revelation to Mark, Kim and to Lava herself. It proved she was no longer afraid to show her silly side, that she’s found peace and happiness in her new life, and that she’s ready to move forward. 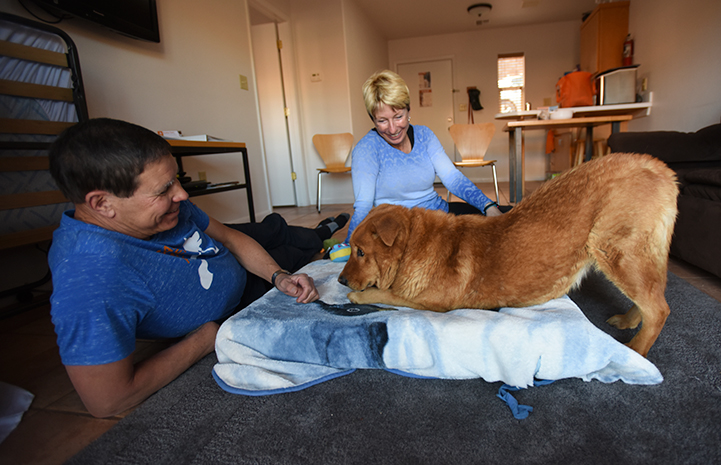