Former tomcat no longer an outsider

Image
After spending his whole life outdoors, a tomcat learns to love life on the inside.
By Christelle L. Del Prete

It’s not easy being on the outside looking in. But for the first year of his life, that’s exactly where Chet was. Though he wasn’t a stray cat before he came to Best Friends, he spent most of his time in the great outdoors. For a cat who adores people as much as Chet does, the tomcat life was pretty rough on him. 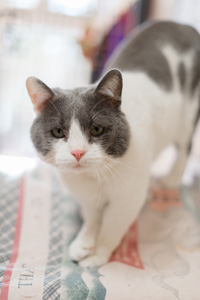 Chet prefers curling up in a cozy bed and having people love on him to roaming the neighborhood. But that doesn’t mean the transition to being an indoor cat was easy for him. As much as he wanted to be inside, it was a whole new world and he was a bit overwhelmed.

You might think that the big gray-and-white tomcat, who was once called “Tough Guy,” could strut confidently into Cat World and hold his own in a lobby full of people and several other cats. But for this sensitive guy, it was too much. Chet fled into an open closet and hid.

When Cat World caregivers and volunteers went in to pet him, he’d puff up his delightfully chubby cheeks, lean in and get his purr motor going at top speed. But venturing outside of his safety zone (except to eat, drink or use the litter box) seemed to overwhelm him.

The busy inside life

Chet was wary of the other cats and he didn’t know what to make of all the foot traffic in the lobby (caregivers, volunteers and tour visitors) buzzing to and fro. The inside world seemed busier and more confusing than the one he was used to.

It’s possible that Chet faded into the background when the lobby was busy because of a slight physical limitation — a right front leg that’s kind of twisted and curled up to his chest. Chet was either born that way or injured while he lived outside. Though he gets around just fine, Chet may have been hiding for fear that he wouldn’t be able to keep up with everything going on in the lobby. So his caregivers decided to do something about it.

Only if Chet was out and about — rather than tucked away — could he get the attention he craved and deserved. So caregivers trained him to walk on a harness and a leash. That way, he could get outdoors again and remember how quick and capable he really is on three feet.

Despite being hesitant at first, Chet quickly got turned on to walks on a leash. Now, he boosts his confidence during his daily strolls-and-rolls in the great outdoors, before returning to the comfortable lobby.

This simple routine sent Chet’s spirits soaring. Now, he steps out of his cozy closet each morning to greet his caregivers with a happy meow. During the quiet times of the day, he’ll hang out in the lobby and investigate the space. While he still ducks into his safe spot when there are lots of visitors, he’ll poke his head with those adorable chubby cheeks around the corner and call hello to them. His squeaky little meows make everyone smile. 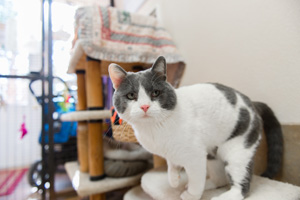 In fact, Chet has become so outgoing that he’s been able to go on sleepovers with volunteers — including one with repeat volunteer Susan Glimcher, who calls him “Mr. Enchantment.” “He has a gentle, quiet spirit,” she says. “He’s so loving, so affectionate, so trusting. All he wants to do is cuddle up with you, to adore you and to be adored.”

In just a few months, Chet has changed from an outdoor cat yearning for a life indoors to a snuggly lap cat who only needs regular, but small, doses of the outdoors to remind him that he’s a true insider.

Be part of the magic — here’s how: