Image
A foster failure love story about a cat foster parent experiencing how hard to resist feline love can be when he adopts two of the cats he fosters.
By Christina Green 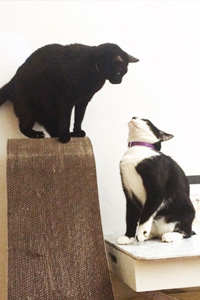 No cage bars blocking the view and the freedom to roam where he chooses? This New York apartment suited Karl just fine. From the moment the handsome black-and-white tuxedo cat arrived at his Best Friends foster home from a city animal shelter, he wasted no time making himself comfortable.

That cool confidence impressed Chris Arzoomanian, Karl’s new foster person and owner of the apartment. In fact, during the next few months, Chris would welcome multiple cats to his apartment for temporary stays. Well, that was the plan anyway, but some of those cats had other plans.

Over the course of the last year, Best Friends placed more than 400 pets from Animal Care Centers of NYC into temporary homes, giving them safe, comfortable places to stay until adopted. It's all thanks to a network of approximately 80 compassionate volunteers like Chris, who open their homes to foster these pets.

That’s how Karl found himself unpacking his bags at Chris’ house.

“He immediately started walking around, exploring, and then he just stood in the middle of the floor, looked up at me and meowed,” says Chris. “I could tell he was grateful to be here.”

Of course, Karl didn’t know the difference between foster and forever, so he immediately started showing his gratitude with lots of affectionate head-butts.

As much as he enjoyed Karl, Chris knew having him around was supposed to be temporary. That’s how fostering works: Volunteers care for pets until they find a permanent home. Besides, the next Best Friends adoption event was just around the corner, and it was entirely possible Karl would land a home — but there was one thing standing in the way.

“We didn't realize Chris was so smitten with Karl until he dropped him off at the adoption event,” says Kristan McCormick, foster and adoption coordinator for Best Friends–New York. “He was hinting toward adopting.”

Though Chris had originally insisted that he couldn’t adopt Karl, his heart had decided from the beginning. When Karl came back to Chris’ apartment that evening, Chris admitted that Karl was there to stay. He got to work filling out the adoption paperwork to make it official.

Determined to successfully foster a cat

Determined to successfully foster a cat and accept the fact that it was only temporary, Chris tried again with Mimi. His resolve held, and he was even strong enough to take the black cat to a Best Friends adoption event, like a good foster parent should. Mimi wasn’t adopted that day, so she went home to Chris and Karl. You can probably guess what happened next. Chris and Karl both grew fonder of Mimi by the minute.

Chris tried to stay strong, promising Mimi that he would take her to one more event to help her find a family, and if that didn’t work out, then she’d join his family. Hey, we all have moments of weakness.

When he and Mimi arrived at the event, Chris says, “There were lots of kittens. I was pretty sure I’d be bringing her back home.” Instead, someone else fell for Mimi, and adopted her.

“It was tough thinking about it,” he says, “but it also felt good knowing I gave her the chance and she was able to find love with someone who will appreciate her for the rest of her life. That felt terrific.” 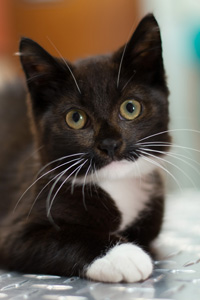 After coming home empty-handed from the adoption event and facing the coming days as a one-cat household, Chris was soon asking if there was another Best Friends cat in need of a foster home. The answer was, of course, “Always.”

This time, Chris wasn’t quite so set against adopting. He thought Karl seemed lonely being the only cat in the household in between foster visitors. So when he met Yoyo, a little tuxedo kitten and tiny replica of Karl, he planned to take a wait-and-see approach. Worst-case scenario was that Chris could feel great knowing he had helped Yoyo find a family.

But from the moment Yoyo’s paws touched the floor, Karl welcomed him home.

“Immediately, Karl started cleaning him and taking care of him,” says Chris, who this time didn’t even pretend his foster kitty was just temporary. He filled out the adoption paperwork and made Yoyo a permanent family member right away.

And with that, Chris had helped three cats find their forever homes. And while he’ll keep volunteering with Best Friends, Chris plans to take a break from fostering. “I really love all of the events Best Friends hosts around the city,” he says, “and I look forward to helping out, even if it’s not fostering anytime soon.”

And that’s OK, too, because there are plenty of other ways Chris can volunteer with Best Friends — ways that come with less temptation to say yes to an irresistible, whiskered face. But we’re not making any promises.