Image
Can kittens survive panleukopenia (also known as feline distemper)? Read about kittens who did, and the care and treatment they received.
By Christelle L. Del Prete and Sheila Chatterjee

With their itty-bitty mews, perfect jelly-bean toes and soft, fluffy baby fur, kittens are one of the most adorable things on the planet. They are also among the most fragile animals entering shelters around the country.

Newborn kittens can’t feed themselves or regulate their own body temperatures. Even as baby kittens begin to grow and become more independent, they are extremely susceptible to illnesses and diseases because their immune systems are still developing. That’s why Best Friends Animal Society and partner organizations are working so hard to place kittens in foster homes and keep them out of shelters.

Sadly, even with the best care, kittens can become ill if exposed to disease before reaching a safe place. One of the most common and serious illnesses is panleukopenia (also known as feline distemper). Panleukopenia is a virus that can cause high fever, loss of appetite and an upset stomach. The virus can be fatal and there is no way to cure it. Veterinarians focus on treating it with supportive care (such as subcutaneous fluids) and anti-nausea medications to give kittens a fighting chance.

The virus takes the lives of countless kittens each year, but with prompt treatment and lots of TLC, many kittens can survive. Sheila Chatterjee, a brand-new foster mom, tells us about her experience with four kittens, how they beat panleukopenia and how they will always have a place in her heart.

I picked up Koi, a little black kitten, and Kyusu, her Siamese brother, from the kitten nursery in Kanab at the end of June. This was my very first time fostering, and I was eagerly looking forward to lots of fun and laughter. The brother and sister were about two months old and had been brought to the Sanctuary from an overcrowded shelter. I don’t know what happened to their mother, and they were orphans by the time they came into my life.

Before being rescued by Best Friends, Kyusu had gotten a foxtail grass awn stuck in his beautiful blue left eye. So, while he was with me, I gave him eye drops to help the eye heal. They were both very shy when I first brought them home and they hid under a towel that I had draped over their cat carrier. They stayed in between the cat carrier and the towel for several hours until they decided it was safe to venture out. 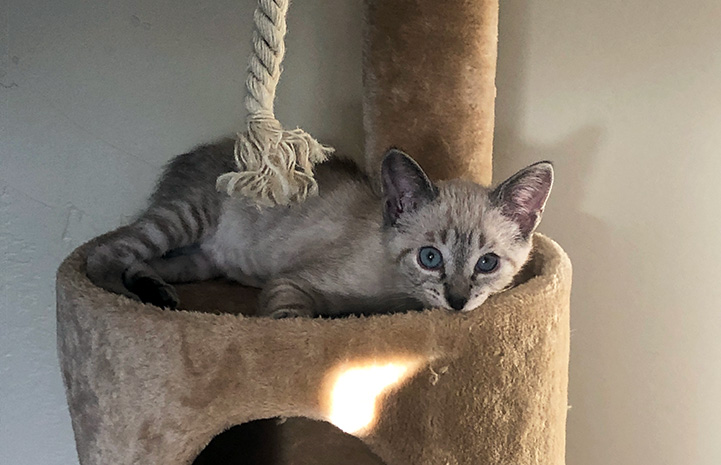 Koi was a little more adventurous than her brother. I had attached a stuffed mouse to a string and was pulling it along the floor next to their hiding place, trying to get them to chase it. Koi started peeking out from underneath the towel to see what this strange and curious noise was. Slowly she crept out. Success!

Once Koi decided it was fun to chase toys, Kyusu followed along. They played nonstop for five hours (until midnight), barely stopping to sniff their food. They were so athletic and active that I decided they needed a cat tree — and probably a big one. So, the next day I drove 80 miles from Kanab to St. George, Utah, to pick one out.

The next four days were great. The kittens played happily and explored their new room, their new toys and their new cat tree. Koi was especially fascinated with my computer, and every time it was opened, she would jump on it. 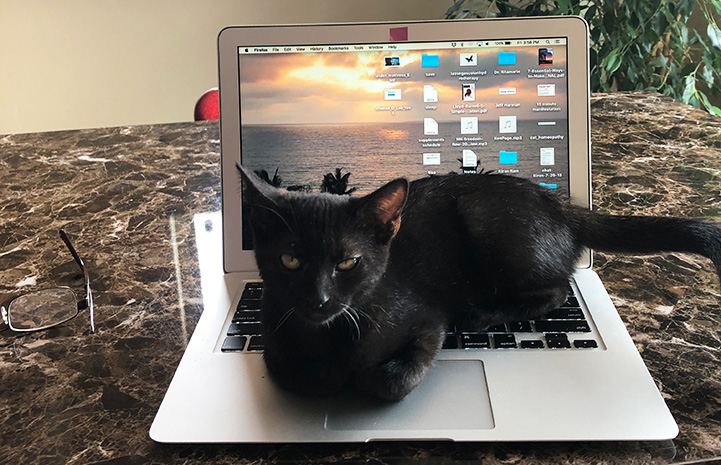 Can a vaccinated cat get panleukopenia?

Then something unexpected happened. The very active, very playful, very curious little Koi quit eating. She lost interest in everything and only wanted to sit in my lap. I should’ve been alarmed by this, but I was so new to fostering that I didn’t recognize the dangerous signs. At 4:30 in the afternoon on the day of this sudden change, she got sick even though she had not eaten all day. I was uneasy. Should I notify Erin Steen, a Best Friends foster specialist, or wait and see?

After 30 minutes of becoming more and more uneasy, I called Erin at Best Friends and within 30 minutes, Koi was at the clinic being tested for feline panleukopenia, a serious and potentially fatal virus. I was shocked and mortified when she tested positive,. How did this happen? If kittens happen to get exposed to the virus before their vaccines kick in, it can take hold, and that’s what the staff thinks happened to Koi.

More about panleukopenia in kittens

Best Friends jumped into action. Koi and her brother were immediately moved back to the kitten nursery and her intensive care began. I was so scared that I didn’t check on her condition for a week. No news was good news, I hoped. A week later, Erin told me that Koi was actually doing well. Kyusu had been moved out of Koi's enclosure because he was chewing up her IV line. I asked Erin if I could bring them back and continue the foster care in my home if Koi recovered. And then I waited. 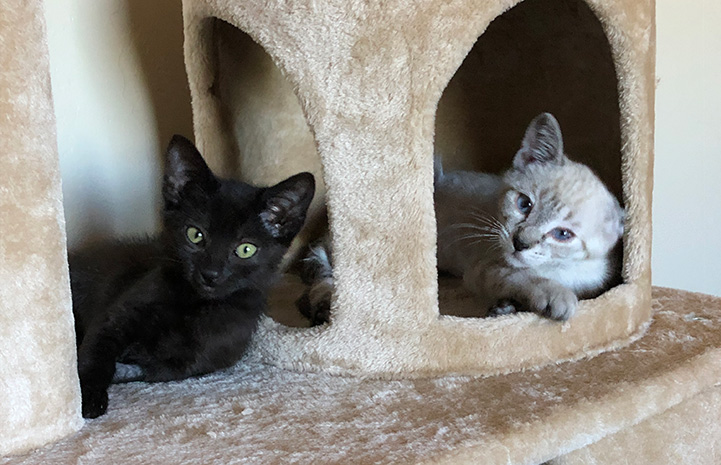 Can a kitten survive panleukopenia?

While I waited for Koi to beat feline panleukopenia at the Best Friends kitten nursery in Kanab (and with her brother quarantined but hopefully strong enough to resist the disease himself), Erin came up with another plan.

There was a cute little orange tabby named Picasso — all alone in the nursery, the only surviving kitten in his litter. All four of his siblings, after arriving at Best Friends from an overcrowded shelter, had succumbed to panleukopenia. But Picasso was tough and Best Friends kitten caregivers helped him pull through. Since Picasso was quarantined and alone, Erin suggested that I bring him into my home, where he could start learning to socialize.

When he arrived, he was very scared and hid under the towel next to his cat carrier, just like Koi and Kyusu. But like the two before him, curiosity eventually got the better of him, and within a few hours, he was out playing.

Picasso is very smart. He saw his reflection, although he didn’t realize who it was. When he first drank water from a steel bowl, he saw himself reflected in the water and was so startled that he jumped a foot into the air. I had to change the water to a nonreflective bowl so he could drink peacefully. 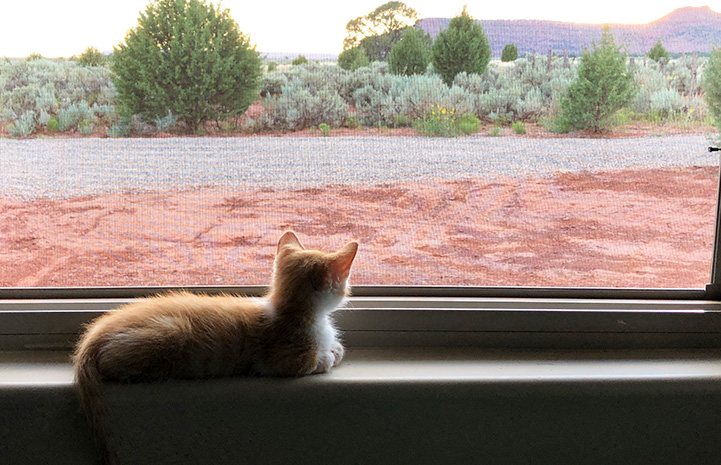 Then Erin had another idea. Another solo kitten named Unstoppable was orphaned, alone and also had survived panleukopenia. But she was also blind. Maybe Picasso and Unstoppable could keep each other company.

I brought her home. Once again, I patiently waited for Unstoppable to gain a feeling of safety and to become curious enough to venture out from under her towel. When she did, she and Picasso immediately became friends. Picasso finally had a real kitten he could play with!

Unstoppable's only problem was the litter box. She would not “go” in it, but right next to it. Thankfully, Picasso quickly taught her what to do, and within a few days she was using the litter box like a pro. They were very good for each other — both gentle and low key. They were well-matched. 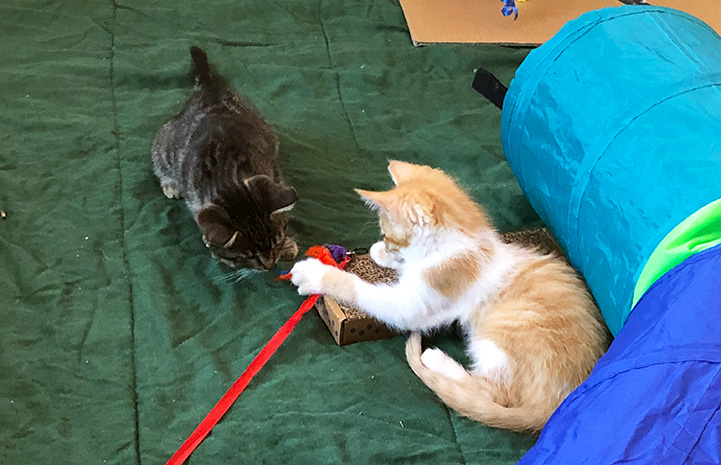 The Best Friends Animal Clinic and kitten nursery did a fantastic job saving Koi as she battled panleukopenia. She fully recovered in two weeks. Koi was ready to return to foster care with Kyusu. Would all four kittens get along? They were from three different litters. I would soon find out.

Four little survivors under one roof Kyusu was ecstatic to be back at home where he could run around the house at full speed. Koi was happy, too, but she didn’t have the same intense energy as her brother. Although Kyusu had been with Koi at the clinic and the kitten nursery while she was sick, he had remained healthy.

Back home, neither one of them knew what to make of Unstoppable, the blind kitten. Though they were very suspicious of her, they did accept Picasso right away. At first, when Unstoppable tried to play with Koi and Kyusu, they would have none of it. But very slowly, Koi warmed up. 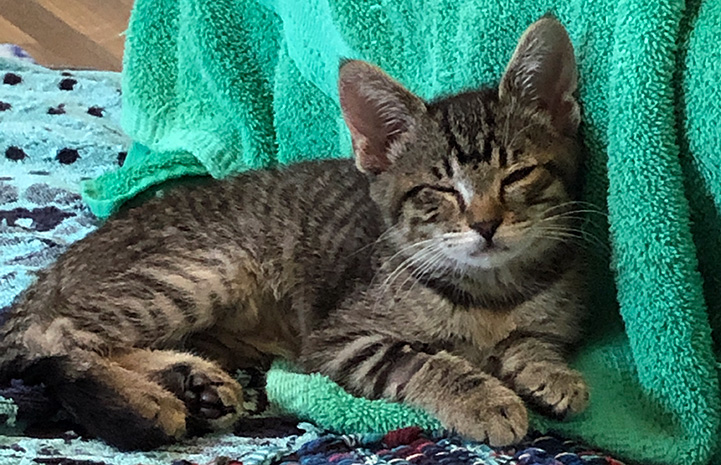 Kyusu was another story. After about an hour of playing with Koi and Picasso and growling at Unstoppable to make sure she stayed away, Kyusu started pacing around the room — growling and hissing at anything that moved, including me. If I walked across the room, he growled.

Guessing that he was overstimulated and confused, I scooped him up and took him into my bedroom where he could spend the night with me and have some quiet time. I left the other three together in their own room. Though I thought they were all fine, I still listened for growls, hisses or any other signs of trouble. Thankfully, it was a quiet night.

Kyusu had never slept with a human before, and he didn’t know quite what to do with me. Finally, he settled on top of my head for the night, like a hat — a warm and loudly purring hat. By the next morning he was fine, and from then on, all the kittens accepted each other. 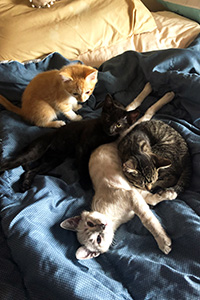 During the next four weeks as they rode out their quarantine, the four little survivors played, explored and grew together. And then they were ready to move on and find families of their own. All four were taken to the Best Friends Lifesaving Center in Salt Lake City, and from there they were adopted into loving homes.

I was sad when Unstoppable, Picasso, Koi and Kyusu left my home. But I wanted people to have the same opportunity that I had to see what wonderful furry bundles of love these kittens had become. Each one was special, and I hoped that some special people would get to experience the love, warmth and fun they bring to our human lives. 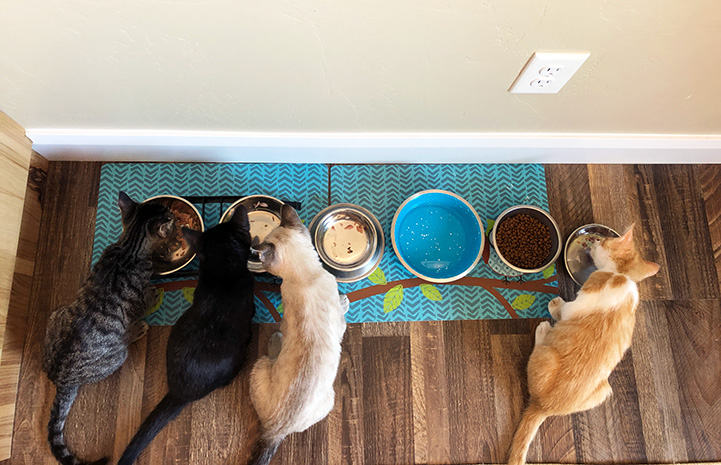