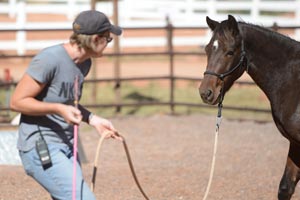 Marshall’s practically still a baby horse, but already he’s seen a lot of change and instability in just three years of life. That’s given him a pretty negative impression of the world, as well as some fear-related behavioral challenges to overcome.

Before coming to the Sanctuary, poor Marshall was auctioned off several times. Then he broke loose and got picked up by animal control after a terrifying run through the streets.

Finally, Marshall landed in a safe place with a local horse rescue organization, but because he really needed specialized training to overcome his fear and confusion, he came to Horse Haven at Best Friends.

Here at the Sanctuary, he’s surrounded by people who understand how he feels and who know exactly how to help him. Horse Haven trainers and caregivers utilize Parelli Natural Horsemanship games — especially the friendly game — to build Marshall’s confidence and help him adjust more easily to common life situations.

Marshall’s response has been incredible and in less than two months he’s made some big strides. “Every time we play with him we make a little more progress,” says Horse Haven manager Jen Reid.

Leading Marshall into the large training arena on a recent afternoon, Jen first checks his reaction to a stick and string horse-training tool that functions as an extension of her arm. “He used to be really jumpy when the string touched his back,” she says. But now Marshall stands patiently while Jen runs the stick along the side of his body, starting at his withers, and finally draping the string across his back. When Marshall doesn’t react, she praises him and removes the string, rewarding him for making a good choice.

From right to left

Then it’s time to challenge Marshall a little more. Jen picks up an empty feedbag, a big white crinkly thing, and begins waving it in the air. “The point isn’t to terrify him,” she explains as Marshall eyes the bag warily. “It’s to get him to switch from the right side of his brain (the prey-animal side) to the left side (the thinking side). We want to turn on his curiosity, rather than feeding into his fear.” That way, when Marshall sees everyday things, like a plastic bag blowing by in the wind, he won’t get so scared.

Marshall remains calm while Jen waves the bag and, after praising him, she reaches toward him with it. Marshall flinches a little when it touches his shoulder, but stands his ground. Just the day before, Marshall ran off during this exercise. But he's smart and gets over things quickly. Jen is teaching him to override his prey-animal thinking. “My job is to know how much to push his boundaries and, most importantly, to know when to remove the pressure,” she says. “That way, he learns that being calm is a much better option than freaking out and acting like a prey animal.” 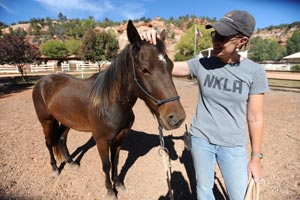 This version of the friendly game helps Marshall understand he’s in no danger. Instead of bolting, he cocks a back leg. That’s a good sign, Jen says, because it’s a posture of relaxation.

Having triumphed over his fear for the moment, it’s time for Marshall to move on to another Parelli game. Although success in this session doesn’t mean he’ll be comfortable with every object that comes his way, he’s gained a little more confidence and practice using his brain. He now has the tools to figure out situations rather than just reacting to them. And that sets him up for a lifetime of success.