A funny thing happened at the Sanctuary, January 2012

Image
Dookie the dog collects big sticks, Melissa the cat finds a secret hidey-hole, and Duke the 70-pound pup is a lot of puppy love!
By Best Friends Animal Society
By David DicksonAt the Sanctuary, there’s never a shortage of goofy antics from the animals to keep us chuckling. Here are a few from this week.Mr. Show-off

Lots of animals like to strut their stuff on a regular basis. Male peacocks, for example, don’t come with all those enormous feathers just so they can have a shade tent whenever it’s convenient. And as for Dookie the dog, he may not have six-foot plumage to wow his neighbors, but he has the next best thing: a six-foot stick. (Or whichever length he happens to find on his daily stroll.) 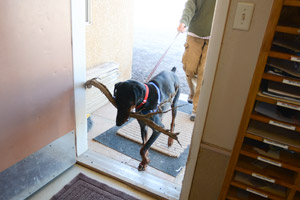 Dookie and his stick

For Dookie, sights, smells and sounds are all fine and dandy when it comes to going on a walk. But in the end, there’s only one reason worth going outdoors, and that’s to find the most impressive hunk of wood he can wrap his mouth around and haul back home for everybody to admire. Most of the time, these sticks are too big to fit through the door without a little sideways shuffling, but for Dookie it’s worth the effort. Paws down, he’s got the coolest stick collection on the block. 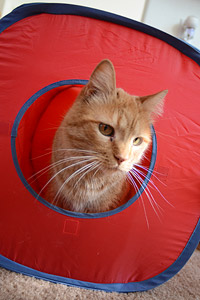 Melissa gets away from it all.

Strutting your stuff around the neighborhood now and again has its place agrees Melissa the cat, but sometimes it’s equally nice to get away from everybody for a little while. And she’s found just the ticket: a secret hidey-hole, where none of the other animals would even think to look for her. By way of background, Melissa, a cat who tests positive for the feline immunodeficiency virus, lives in one of the office buildings at Best Friends, shares living space with five male cats, one female cat, three dogs and a pig. No wonder she wants to carve out a bit of quiet time!

Here’s her clever solution. Inside the bathroom in her building, staffers have placed a few animal travel carriers for storage. Melissa discovered that if things get a little too hectic, it’s a cinch to head into the bathroom, open a carrier, climb in, and shut the door behind her. Staffers wouldn’t have believed it if they hadn’t seen her do this with their own eyes. Best of all, none of the oft-times noisy neighbors have bothered her yet.

Pro athlete in the making

Most kids signing up for little league football probably wouldn’t want to practice tackling with an NFL player. In the same spirit, a roomful of puppies at the Sanctuary took one look at Duke the puppy and wanted nothing to do with him. Though he was only about a month older than the other pups, Duke towered over all of them. "He was twice their size," explains caregiver Taz Christensen. 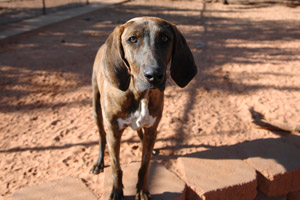 Duke is one big pup!

Duke can’t help it if he weighs over 70 pounds at only six months old. He’s just one big, playful hound pup. And, boy, does he want to play. The puppy run simply wasn’t going to work out, so Duke moved in with some adult dogs, where he continues to live life in the turbo lane. "You can tell he’s a puppy by the way he acts, but he’s one of the biggest dogs in the building," says Taz.

Sometimes his new roommates find Duke’s puppy antics exhausting, but overall he’s been given a warm welcome by the older dogs. "They all play really well with him," Taz explains. Good thing, too. Everybody needs friends, even NFL players on the constant lookout for someone to play-tackle.

Adopt a best pal for life

Looking for a friend to keep you smiling and chuckling? Consider adopting one of the loveable animals with personality-plus from the Best Friends Sanctuary.