A funny thing happened at the Sanctuary, March 2012

Image
At the Sanctuary, there’s never a shortage of goofy antics from the animals to keep us chuckling. Here are a couple from this week.
By Best Friends Animal Society
By David Dickson 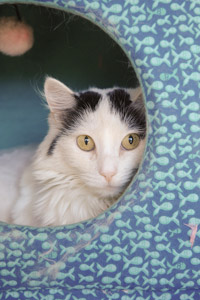 Wednesday is happy to live as an office cat.

Fashion, with its ever-changing styles, can be a mighty hard thing to keep up with. However, one staffer at Best Friends has found a way to always look her best while simultaneously staying cozy on chilly mornings. This breakthrough of an accessory comes in the form of Wednesday, a feline with a penchant for draping herself around human necks. "I call her my cat broach," jokes Brenda Canterbury.

A place where she belongs

Wednesday needed a place to stay at Best Friends away from all other cats. When she first came to Best Friends several months ago, she tested as discordant, which means she tested positive on one feline leukemia test but negative on another. The conundrum there was that Wednesday couldn't live with cats who test negative on both tests because she could have passed something on to them. Nor could she live with cats who test positive on both tests because they might have passed something on to her.

So, Wednesday was more than happy to live as an office cat with Brenda. And as for Brenda, she’s thrilled to have the perpetually snuggling cat with her. "She’s my little baby," Brenda says.

As it turns out, this fashion show has a flash of good news. As is routine procedure with new cats who test positive for feline leukemia, the medical team tested Wednesday again several months after arrival. This time, she tested negative on both tests. "She is absolutely ready to be adopted," explains cat manager Michelle Warfle. And hey, no matter where she ends up, Wednesday will always be in style.

An appetite for fashion

Speaking of accessories, Alex the dog has developed an unexpected fondness for a particular accessory he once steered clear of: the muzzle.

Alex is a Hurricane Katrina rescue whom caregivers had never been able to muzzle before. He gets suspicious of anything you might be carrying in your hand. And if he becomes too afraid, he can nip. 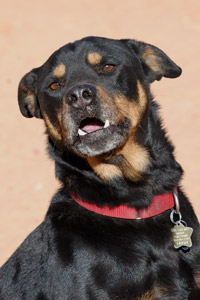 There was a new training technique going around the Sanctuary that Dogtown manager Michelle Logan wanted to try with Alex. The trick was to tie a muzzle to the fence with pipe cleaners, so it would sit at head level to the dog. Caregivers or trainers could go outside and sneak treats through the fence into the muzzle, encouraging the dog to place his face inside. Nothing intimidating, and lots of goodies. A pretty easy sell.

One thing to keep in mind, though: "Sometimes training does not go exactly as planned," Michelle explains.

Oh, the training went as expected in the early stages. "Alex was indeed skeptical of it at first," Michelle says, "but that was nothing hot dogs could not fix." In no time at all, Michelle and a couple of Alex’s caregivers had taken the first few steps in training Alex not to fear the muzzle. The training worked a bit too well.

A half hour later, Alex decided this was one fashion piece he couldn’t live without. He ripped the muzzle clean off the fence, dragged it to his dog bed, and cuddled up next to the thing. He’s no dummy. What dog wouldn’t want to keep a magical treat-generating face mask as close to him as possible?

Looking for a friend to share the good times with? Consider adopting an animal from the Sanctuary to laugh with and keep you smiling.