Marcia Shaw’s home was already filled with love. Two cats, a pit bull terrier, plus a few grandchildren round out the household, but she recently discovered that their family had even more love to give.

It started when Marcia’s 12-year-old granddaughter, Anna, learned that children 12 and over (accompanied by an adult) could volunteer at the Best Friends Pet Adoption Center  in Salt Lake City. Marcia thought volunteering would be a great opportunity to bond with Anna while also helping animals, so she signed them up. She just had one worry: How could the two of them resist the urge to adopt a kitten? It turns out she didn’t need to worry, because the cat they fell in love with was hardly a kitten anymore. 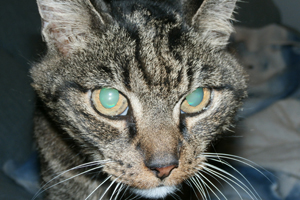 Marcia and Anna were helping to clean the adoption center one evening, and once their shift ended, Anna took a moment to play with the cats. As she passed an enclosure, she heard a very loud meow. She stopped and saw that the meow belonged to a petite, gorgeous long-haired tabby cat, named Hemi, who a month earlier had come from Salt Lake County Animal Services.

Anna spent a few minutes petting the vocal cat, but when she went to leave, Hemi let out another loud meow, making it clear she liked the petting and that she didn’t agree at all that Anna should stop. With that first encounter, 15-year-old Hemi had managed to outshine all the many younger cats and kittens at the center.

“After we left, all Anna could talk about was Hemi and whether we could take her home,” says Marcia. She wanted to think about it before making a decision, but as the two continued to help out at the adoption center, they kept finding themselves focusing their attention on Hemi. Anna knew her grandmother wanted to take time to consider whether to bring another pet into the household, but Anna was ready to take the leap and she wanted Hemi to be the one. So she redoubled her efforts. Marcia says, “Every day I would find ‘Get Hemi’ written on my message board in the kitchen.”

Grand lady of the house

By Memorial Day, Marcia’s mind was made up: Hemi was coming home with them. The family adopted Hemi over the holiday weekend and, since then, she’s brought them more love and joy than they could’ve imagined. They call her Miss Hemi Lou, and she fits right into the household.

Beyond Hemi’s “most beautiful eyes,” Marcia just loves her fun personality. “When she gets tired of you petting her, she will move on to someone else,” Marcia says. “She has already taken over my recliner, and the other animals seem to know she is the grand lady of the house.” 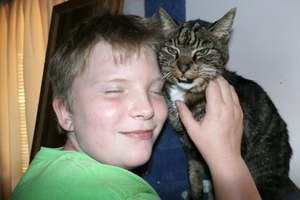 Miss Hemi Lou is especially drawn to Marcia’s autistic grandson, with whom she likes to cuddle and snuggle. The boy loves her to pieces right back.

The grand lady’s journey home is testament to the fact that older pets have just as much love to give as puppies and kittens. In fact, sometimes young people choose pets older than themselves — like Anna, who is three years younger than Hemi. The adoption also opens up space for more cats and kittens to find their forever families. Best of all, Hemi gets to live out her golden years surrounded by love.

Learn more about Best Friends in Salt Lake City, including how we’re working to make Utah a no-kill state by 2019.