Getting creative for cat adoptions 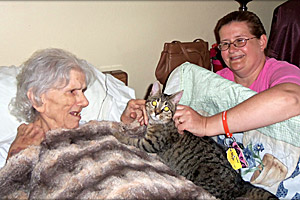 Mr. Soot and nearly two dozen of his feline brethren are all nestled comfortably into their new homes. Each cat, equally deserving of a loving family, just needed a little oomph to get there. There were cats who had been in the shelter for a while, like Penny, who waited patiently for seven months to plop down on her own couch. Some of the cats, including Casandra, visited residents in a retirement home while they waited for their own forever home. Casandra's specialness was marveled at when she inspired a patient with Alzheimer's to say her first phrase since being afflicted with the disease: "kitty cat."

Fortunately, the organization who rescued them, the SPCA of Northeastern North Carolina (SPCA of NENC), had a great idea and the backing of Best Friends to make it work. A rural shelter with the animal control contract for their area, SPCA of NENC has 3,000 animals come through their door every year. By being a part of the No More Homeless Pets Network, they receive assistance, which eases their burden, and helps them put on creative events like their 4/20 cat adoption. On April 20, the shelter set a goal of adopting out 20 animals at a reduced adoption fee of $20. 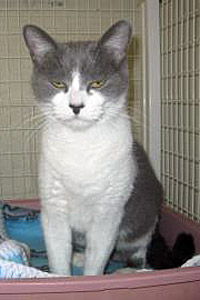 Sabrenna Protain, manager at SPCA of NENC, has been with the organization for four years. She's seen the organization grow and their mission expand. In February, they took in 80 canine victims of an alleged dog-fighting operation. In March, they helped place 101 cats from a pet rescue gone wrong. In April, they took in 13 pets from an animal cruelty seizure, and in May they assisted in placing 31 animals from a hoarding situation.

If any group could have used a little boost in the adoptions department, SPCA of NENC was certainly prime. When Sabrenna reached out to see if Best Friends could support the 4/20 cat adoption event, No More Homeless Pets Network specialist Robin Politowicz jumped at the chance to support their unique efforts.

Sabrenna says, "We were thrilled that Best Friends wanted to support our endeavor, but we weren't surprised because we've been grateful for all the ongoing support Best Friends has provided our organization."

The 4/20 adoption event had even further-reaching results. A local organization, Bedliners Plus Accessories, offered to donate $1 for every visitor the shelter received during the promotion, so not only did 20 cats find new homes, but the organization had 133 more dollars in their coffers.

"The fact that we were able to bring more people into the shelter was a huge benefit, along with the money," says Sabrenna.

In addition to the 4/20 cat adoption event, as a No More Homeless Pets Network partner, the organization has been eligible for other assistance. Back in January, Best Friends gave them financial aid to spay or neuter 30 adoptable shelter animals. But one of the most exciting opportunities that being a Network partner affords the organization is a sponsorship to the No More Homeless Pets Conference coming in the fall in Jacksonville, Florida. Sabrenna is all set to join us.

You can help the SPCA of Northeastern North Carolina. Click here for ways to get involved. They are currently accepting donations to secure a new facility.

To find a No More Homeless Pets Network partner near you, click here.

Photos courtesy of the SPCA of Northeastern North Carolina