Getting it right for free-roaming cats

In March of 2011, Utah passed Senate Bill 57, also known as the Community Cat Act. This progressive piece of legislation, heavily supported by Best Friends, was enacted just as the brouhaha over Rep. Curtis Oda’s House Bill 210 – the proposed piece of legislation that would have permitted citizens to shoot feral cats as a means of population control – was being laughed out of the state.

Trap/neuter/return (TNR) has been widely accepted as the most effective means of reducing the community cat population while also reducing the number of complaint calls about nuisance cats.

TNR also reduces the number of cats dying in the shelter system. Municipalities with TNR programs goosestep the admission of cats into their facility. They work with other organizations to ensure the cats go straight to spay/neuter clinics, and then post-surgery are returned to the place in their community from whence they came. Best Friends Animal Society – Utah holds regular boot camps to teach people about TNR.

Paving the road to no-kill 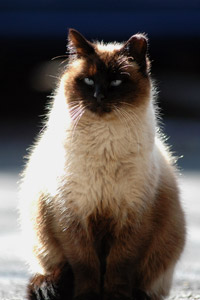 Less bureaucracy is good for the cats.

The Salt Lake City Council has just put some additional oomph into their Community Cat Act efforts by changing an antiquated law. The area had required community cats to be returned exclusively to registered caregivers, but dropped that requirement after a vote in mid-July.

"The City Council relinquishing the caregiver permit requirements is a huge step for community cats," shares Jaime Aalen, community cat manager for Best Friends Animal Society – Utah (formerly No More Homeless Pets in Utah). "It will allow Salt Lake City to save a lot more lives because the cats will be able to be returned right away and not have to be released to a registered caregiver. It takes the bureaucracy out of the process. Salt Lake County Animal Services helped get this passed and of course we’re supporting them. Helping community cats is an evolution, and we’re here to help by supporting spay/neuter and education."

Another great stride for community cats happened when West Valley City and Taylorsville recently proclaimed no-kill as a goal. Implementing a TNR program is key to realizing that success. Best Friends Animal Society – Utah is committed to making that happen by working with animal services and providing TNR resources, including spay/neuter vouchers for residents trapping cats. The Community Cat Program looks to dramatically increase the save rate of community cats.

While TNR in Northern Utah is supported by Best Friends Animal Society – Utah, the community cats of Southern Utah and Northern Arizona are helped by our Four Directions Community Cat program, based out of Best Friends headquarters in Kanab. By using the Best Friends clinic and partnering with local veterinarians around the area, the program puts real muscle behind the TNR support. In the first six months of 2012, there have been 887 community cat spay/neuter surgeries.

"By working with caregivers in smaller towns, we’re able to give people that have few local resources the assistance they need. All they have to do is contact us and we will readily support their work," says Janice Dankert, cat initiatives coordinator for Four Directions.

Janice cited a new partnership that exemplifies why the program works. A caregiver in Escalante, Utah, reached out to them to get one community cat fixed. Janice replied, "How would you like to volunteer to help all the cats of your town?" To date, 59 cats have been spayed/neutered and returned to this rural enclave. Left unchecked, the numbers of free-roaming cats could easily eclipse that of the human population in just a few months.

If your community could benefit from the help of Four Directions, email janiced@bestfriends.org.