A gifted volunteer shares her talents with animals

Image
Woman volunteers with and plays her harp for the dogs, cats and other animals at the Sanctuary.
By Christelle L.Del Prete

Volunteering at Best Friends can take many forms. Just ask Ellen James, a professional harpist who recently performed for a full house in Dogtown. Music and animals have always come together in Ellen's life. She grew up in family that loved both, and discovered early on that she had a way with animals and a talent for singing folk songs. Because she was shy and wanted something to hide behind, she picked up the harp about 20 years ago and never put it down.

Luckily, Ellen has been able to carve out a career around her passions. She spent many years training seeing-eye dogs, and she currently runs a pet sitting/dog walking business in northern Virginia. And, though she says she'll take any musical gig she can get, Ellen has played at some impressive venues on the East Coast, including the Smithsonian Castle in Washington, D.C. and the White House.

A perfect opportunity to be with animals 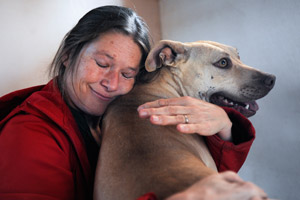 Though Ellen calls northern Virginia home, she recently spent several months in Kanab, Utah, home of Best Friends and her parents. Though she'd come primarily to help her parents recover from a serious car accident, Ellen found that volunteering at Best Friends was a perfect opportunity to fulfill her "need to be around critters." At least once a week, she walked dogs at the Fairway in Dogtown. Ellen said she loved coming back over and over and seeing the progress that the dogs were making.

She took a particular interest in the shy dogs, and thought about how she might help socialize them. That's when she got an idea: Why not introduce them to a little music? So Ellen brought her harp to Dogtown one day, hoping the dogs would sing along. Instead, a dog named Pearl took a different approach; she started kissing Ellen while she was singing. Pearl was so insistent on being near her that Ellen ended up playing with one hand and petting Pearl with the other.

Sing-alongs with cockatoos and crocheting with other animals

Not one to leave out her feathered friends, Ellen paid a visit to Parrot Garden and serenaded the birds. Her audience, particularly the cockatoos, showed their appreciation by screaming along with the songs. For Ellen, this was extremely satisfying. With self-effacing humor, she says that "there are not too many places where a soprano can belt it out and nobody minds."

After Parrot Garden, Ellen went to Piggy Paradise, and later to Cat World, where she engaged in a different art: crocheting. The cats were fascinated, and she had a blast watching them hide in baskets and play with the yarn. Then, as if being a celebrity at the Sanctuary weren't enough, Ellen shared her talents at Kanab's monthly open-mic night. At her last performance, she invited the audience to sing along. (She's not, however, going to tell whether the people or the parrots would win in a sing-off.) 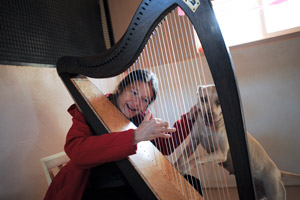 On her last day in Kanab, Ellen spoke fondly of her experiences at Best Friends and some of the animals with whom she'd bonded. Though she specifically mentioned dogs Mocha Too, Lucy Lu, and Zeb, it's clear Ellen made lots of furry and feathered friends during her stint as a volunteer.

And it seems like there's a good possibility that she'll be back someday to play and sing at the Sanctuary. "Animals and music complement each other perfectly," she says. "You can work and work for years to perfect new techniques in music." But Ellen points out that the animals are content just to hear her play. And they're always looking for volunteers who have some talent, or some time, to share with them.

Volunteers are needed in Los Angeles to take part in a friendly competition between Best Friends and Stray Cat Alliance to fix community cats on Friday, April 26. Be on the first team to humanely trap 50 cats for trap/neuter/return. To join Best Friends' team in the north, call 909-730-6254 or email victoriaj@bestfriends.org, or to join Stray Cat Alliance's team in the south, call 323-821-8558 or email volunteers@straycatalliance.org.